Amelia Acton (née Welsh) amassed a string of convictions for property crime over a period of at least fifteen years, spending a large portion of her middle age in London’s prisons. Like many of her contemporaries, Amelia was evidently unable, or unwilling, to break free from the revolving door of crime and imprisonment in nineteenth-century London.

Little is known about Amelia’s early life. According to several different sets of records identified for her, she appears to have been born c.1819. The Middlesex House of Detention Calendars 1836-1889 reveal that Amelia was convicted under the alias surname of Welsh in 1852. This may well have been her maiden name, for there is an Amelia Welsh recorded in the 1841 Census as living in the St Pancras area, with a birth year very close to 1819.

Most of what we know about Amelia’s crimes and appearances before the courts is based upon the previous convictions listed for her in the Middlesex House of Detention Calendars 1836-1889 and the UK Licences for the Parole of Convicts 1853-1925. According to these records, Amelia was first brought before the courts in February 1851, under the alias of Sarah Smith, with a trial at the Middlesex Sessions of the Peace for stealing table cloths, resulting in a sentence of four months in the house of correction. This was to be a common pattern in Amelia’s subsequent criminal career over the next fifteen years: namely, multiple convictions for relatively minor thefts, usually of clothing or linen, likely as a result of her access to such items as a laundress.

Following her conviction in February 1851, Amelia was thereafter convicted of two further petty larcenies at the Middlesex Sessions of the Peace, in September 1851 and November 1852, receiving sentences of imprisonment for twelve months and nine months respectively. Amelia however next found herself on trial at the higher court of the Old Bailey, for unlawfully uttering counterfeit coin. She admitted to the charge of having paid for a glass of rum with a bad shilling; in her defence stating that it had been out of necessity, it being “a very cold day”. She was consequently found guilty, and sentenced to six months’ imprisonment.

This appearance before the Old Bailey marks a sea-change in Amelia’s experience of the justice system. Her crimes remained much the same - relatively minor thefts of clothing and linen, often gowns. Yet having now established a record as a repeat offender, and with a recent appearance at London’s Central Criminal Court to her name, the sentences passed on Amelia were subsequently much more severe.

In December 1854, just four months after having served out her imprisonment for the Old Bailey conviction, Amelia was sentenced at the Middlesex Sessions to four years’ penal servitude, a harsher form of imprisonment at hard labour in dedicated convict prisons, introduced in the 1850s as a replacement for the transportation of repeat offenders.

If this more stringent punishment was intended to reform or deter Amelia away from crime, it evidently failed, for just a few months after the expiration of her sentence, in August 1859, she was back again before the Middlesex Sessions, for larceny (this time for the more serious offence of stealing 23 yards of carpet), and sentenced to another stint of four years’ penal servitude.

Prisoners serving penal servitude sentences could be released early on licence (probation), but if they reoffended they were likely to have their licences revoked and be returned to prison. This is exactly what happened to Amelia: not long after being released on licence in October 1862, she was convicted of larceny and re-imprisoned, only later released in August 1865 at the expiration of her sentence.

Amelia’s release from prison in 1865 after the revoke of her licence was not, however, to be her last stint of incarceration. A year later, in November 1866, she was sentenced to a lengthy term of seven years’ penal servitude for the relatively minor crime of stealing a gown, no-doubt as a result of her now substantial criminal record.

It is from the subsequent prison licence, granted in January 1871, that we learn most of what we know about Amelia’s personal details and major life events. According to that document, she had brown hair, hazel eyes and a dark complexion, average in height, at 5 feet 1 inch, and weighing about 7st 10lbs. In her final identifiable stint in prison she was deemed free of morbid conditions and fit for any labour. Her conduct whilst under separate confinement was declared to be good, and perhaps a key reason in her early release.

Neither marriage, children, education or employment were evidently factors towards desistance in Amelia’s case. She seems to have been married with one child by 1855, at the age of about 36, at which point she found herself locked away from her family for increasingly lengthy periods of time. She could read (and possibly write too, according to the Middlesex House of Detention Calendars 1836-1889). And on numerous occasions she appears to have found employment as a laundress following her imprisonments, only to fall back into crime.

Following her release on licence to the Battery House Refuge in 1871, and now in her 50s, no further appearances before the courts have been identified for Amelia, even though she seems to have lived on into her late 70s. Why she desisted from crime at this point is unclear, given that she had been caught in a cycle of crime and imprisonment for the past fifteen years. It may have been because she subsequently entered into the St Marylebone Workhouse, for there is an "Amelia Acton" listed as resident there in the 1881 Census (including an age consistent with that recorded for Amelia in her later prison licences). Again, final years are as yet unclear, although there is a burial record in 1888 for an Amelia Acton, aged 79, at Guildford in Surrey. 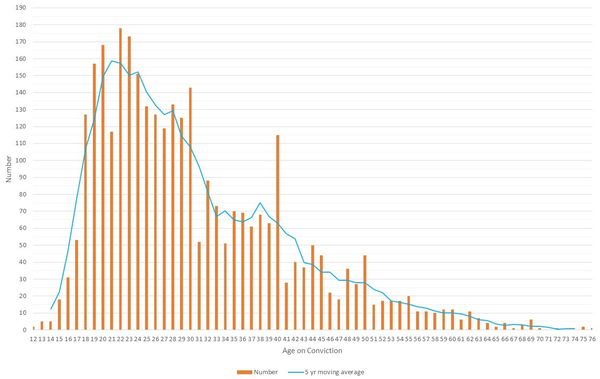 Based upon what we can tell from the surviving records, it seems that Amelia Acton fell into crime - or first appeared before the courts, at least - at a relatively late age. Her first conviction came at the age of 32, and her first (and only) appearance at the Old Bailey at the age of 34. Yet women in their mid-30s like Amelia were in fact three times less likely to be tried at the Old Bailey than women in their mid-20s. Indeed, if we look at the number of women of each age put on trial at the Old Bailey, there is a sharp falling off in numbers between those in their later 20s and those in their early 30s. This has been correlated to the typical changes taking place in the female life cycle at this age, particularly the tendency - as with Amelia - for women to get married and have children.

Amelia’s continued reappearances before the courts and consequent imprisonments throughout her 30s, 40s and 50s is also somewhat atypical. As shown in the graph above, whilst many of the women released on licence were in their 30s and 40s at the time of their conviction, this was far less common for those, such as Amelia at the time of her final recorded conviction, who were in their 50s. When confined in Brixton prison during her final period of incarceration, Amelia was unlikely to have been surrounded by many other women in their late 50s.