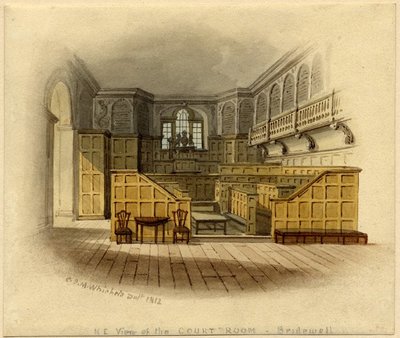 The archive resources of the Bridewell House of Correction form an eclectic collection of wide-ranging records, but with relatively limited detail of crime and punishment in comparison to other sources within the Digital Panopticon. Nonetheless the "Bridewell" records can provide valuable evidence of petty offending, which often accompanied the more serious crimes committed by defendants tried at the Old Bailey

Bridewell was a royal palace built between 1515 and 1520 for Henry VIII. The location, next to the Fleet River (which was used as a sewer), however, was insalubrious. In 1553, it was given to the City of London, and it became both a hospital for vagrants and homeless children and a place of incarceration for petty criminals, who were punished with whipping and hard labour. The prison was brought under state control in 1833 and finally closed in 1855. The Court of Governors met every two or three weeks in the seventeenth and early eighteenth centuries, and then less frequently (sometimes only a few times a year) during the rest of the eighteenth century. Among the wide variety of business they discussed was the punishments, including the length of incarceration, of the petty offenders who were committed there.

The record of each meeting of the court starts with a list of the governors present, and then includes a list of offenders currently kept in Bridewell Prison, and the court's decisions about what to do with them. This is typically followed by decisions taken about matters pertaining to the running of the institution and its property, and the report ends with decisions taken about the Bridewell apprentices.

Petty offenders were committed to Bridewell by beadles, constables and others figures of authority. Many were discharged before the Court met, particularly later in the century when the Court met infrequently, but the fates of those who remained in Bridewell when the meetings took place were determined by the governors. Most were simply discharged, as indicated by the abbreviation "dd" in the margin, followed by a number in a rough chronological series. This series was restarted every Easter, and probably corresponds to a numbered register of inmates which has not survived. These numbers allow the size of the prison population to be calculated, while gaps in the series reflect prisoners who were taken into Bridewell, but who were discharged before the Court met. Some prisoners were discharged to their master or father, while others were ordered to be whipped. This is indicated with the abbreviation in the margin of "pun" for punished; or they were ordered to hard labour. Some were simply "cont" (continued), or ordered for re-examination, while others were to be removed to their parish of settlement. Unless described as an old prisoner, indicating that they had been brought before a previous meeting of the Court, the prisoners' offences were briefly described in the minutes. These delinquencies include a very wide variety of minor vice, vagrancy and property crimes, or often a combination of offences. Most frequently, prisoners were accused of: 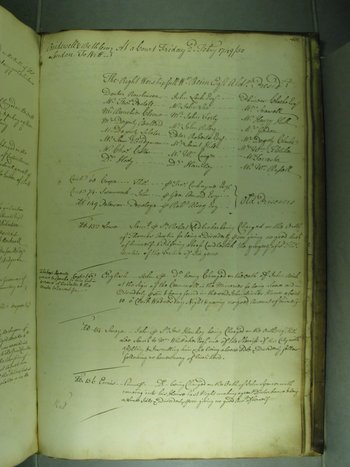 Petty offenders committed to Bridewell may also be found in the "Middlesex Pauper Examinations 1740-1800" and "Vagrants removed from Middlesex 1777-1786" (for both, see Records Associated with London Lives 1740-1800.

Other eighteenth-century records in which these offenders might be found include the "Coroner's Inquests into Dead Prisoners 1760-1799" (see Deaths in London Prisons 1760-1869) and "Boys Recruited into the Marine Society 1770-1773" (see Records Associated with London Lives 1740-1800).

The chief strength of this record series is that it provides rare and valuable evidence of petty offending, which may have often have preceded or accompanied the more serious crimes of the defendants who were tried at the Old Bailey. However, coverage is patchy and the amount of information provided is very limited. Most importantly, the Digital Panopticon only includes these records up to 1795.

The jurisdiction of the Court only extended to the City of London, so petty offences from the rest of London (Middlesex, Westminster and Southwark, where most Londoners lived) are not included. Similar Bridewells (often called houses of correction) can be found for each of these jurisdictions, but their records have not been digitised. Moreover, many of those committed to the City Bridewell are not listed in the Minutes, since the majority of prisoners were discharged in between meetings of the governors, and therefore are not recorded. This becomes increasingly the case over the eighteenth century as the intervals between meetings of the Court grew longer, and can be seen in the gaps in numbering system of prisoners between the end of one meeting of the court and the start of the next.

Finally, each entry provides little evidence about the individual prisoner - usually nothing more than their name, followed by a brief summary of their offence(s). Personal details (such as age) are rarely provided, making it difficult to link these records to other convicts found in the Digital Panopticon website. Consequently, there is limited linkage and few Life Archives which include an entry from this source.

The original records are kept at the London Metropolitan Archives (reference CLC/275).

A full run of this record series from 1689 to 1800 has been digitised and transcribed on the London Lives website.