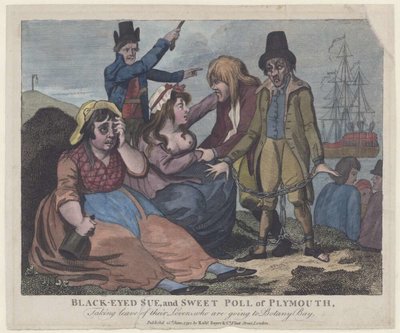 The "Convict Indents (Ship and Arrival Registers) 1788-1868" records included on this site is an (incomplete) listing of individual-level information taken from the shipping lists regarding convicts transported to the Australian colonies of New South Wales, Van Diemen’s Land (now Tasmania) and Swan River (now Western Australia).

The documents we today call "Convict Indents" are more correctly Ship’s Musters. The misnomer arises from their close association with legal indentures which comprised one component in a series of records which contributed to the creation of the Convict Indents.

Indents were, in effect, convict passports. As they evolved, they came to include a physical description for identification purposes, and a wealth of other personal information mainly reflecting on life before exile. The scale and scope of these records has made "Convict Indents" the starting point for genealogists and a key resource for Australian historians. 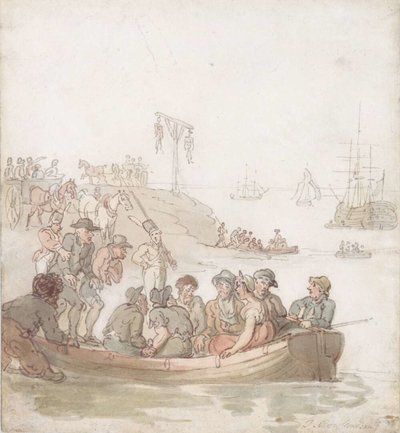 The 1784 Transportation Act (24 Geo.III, s. 2 c. 56) specified the creation of three relevant documents. The first was a Certificate of Removal to a place of confinement while awaiting transportation "containing his Christian Name, Surname, and Age, and also the Offence for which, and the Court in which, he was convicted, and the Purport of his or her Sentence". Overseers at the "Places of Confinement" were responsible for drawing up a second series of documents, a termly return "specifying the Name of every Person in their Custody, the Offence of which he or she shall have been guilty, the Court before which he or she shall have been convicted, and the Sentence of such Court, together with his Age and bodily State, and his Behaviour whilst in Custody" plus a return of convicts who had died, escaped or been lawfully discharged. This is the origin of the gaol lists and Hulks Registers which over time became more comprehensive.

When a decision had been made regarding which convicts to transport on a given vessel, then the third record, an "Order of Transportation" or "Order of Transfer", was drawn up by a Secretary of State or their representative. This was the legal "indent". This listed every convict on board, for each "containing his Christian Name, Surname, and Age, and also the Offence for which, and the Court in which, he was convicted, and the Purport of his or her Sentence": in Tasmania, these may have become "CON 13 Assignment Lists and Associated Papers". Like the "Certificate of Removal", this was another of the legal indentures conveying "a Property in the Service of such offender or Offenders" as they moved through the legal system from conviction to colony; through this indent, proprietorship passed from the State, first to the shipper contracted to convey the convict "beyond the Seas".

Upon arrival in a convict colony, port regulations forbade all but the ship’s Surgeon-Superintendent to make land until permission was formally granted by the Colonial Governor, so it was the surgeon who conveyed the indenture – and with it control of the convicts – to the Governor who in turn deposited it in the Colonial Secretary’s office. There, it provided the sole colonial proof of an individual’s status as a transported felon. A name and a ship were key to identification. The indent was thus a crucial part of the process of shipping out convicts to the penal colonies, both practically and legally.

The Colonial Secretary then passed the indents on to the Muster Master, who was charged with constructing two large abstracts of information, one volume to be held in the colony, and the second returned to Britain. Immediately the Muster Master began by (selectively?) transcribing information from the indenture onto sheets of approximately 75cm breadth, each convict occupying a single line, and across which he arrayed a series of columns.

With other documents also available, he partially filled in his pages. Then, within a day or two of landing and before convicts were allowed to disembark, the Muster Master, accompanied by the Principal Superintendent of Prisoners, would alight the ship armed with his prepared sheets to make "a most minute examination of every prisoner on board". Based on observation and interview he filled the remaining columns with personal descriptions of each and every convict. George Arthur argued that convicts felt pressured to give accurate answers to the Muster Master under the weight of pre-existing knowledge that could be used to catch out falsehoods. Information was collected that aided identification, convict management and the use of convict labour in the colonies. Details are listed below. It is these documents compiled by the Muster Master that are today known as Convict Indents. 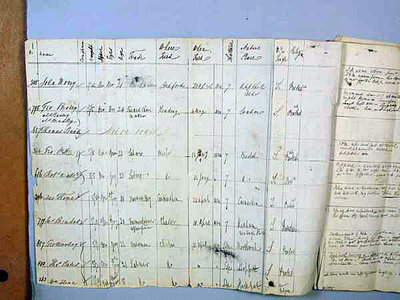 There is uncertainty with regard to what information was obtained before the voyage, during it or at the point of interview in an Australian port. Although the 1784 Act of Parliament stipulated the information to be recorded in specific documents at various stages, if it was in the original, it did not always translate into the Convict Indents. Age, for example, did not appear in the records until the Admiralty took charge of appointing Surgeon-Superintendents at the end of the Napoleonic Wars. Perhaps the most striking omission was any detail on the offence that caused banishment. Early Irish Indents did include crime, but English ones did not. Nor did they until 1826.

Convict Indents were thus criminal passenger lists, arranged by ship, then (usually) alphabetically by surname, systematically documenting offenders punished with transportation to one of Britain’s penal colonies. The extent of information recorded increased over time, and varied between places of origin and destination. It was typical for all indents to include shipping information, including: ship; master; surgeon; ship’s place of origin; date of departure; port of arrival; and arrival date.

The records to Van Diemen’s Land were even more comprehensive from 1841, reflecting in some detail on: statement of crime or "confession" (current offence and any criminal history); behaviour; relatives (more detailed in the case of female convicts); any time spent "on the town" (for females) in prostitution; and convict number.

Several versions of Convict Indents can exist. Handwritten in the original, there were also printed copies. In NSW, from 1830, Convict Indents were printed and circulated to District Magistrates for purposes of identification and convict management. These were annotated with the colonial milestones that changed the legal status of a convict marking the transition to freedom such as Ticket of Leave, Certificate of Freedom (time expired), Conditional Pardon, Absolute Pardon. Consequently, columns of colonial information are often fragmentary, reflecting only the district from which they came.

A number of other sources were involved in the assembly of - and therefore have similarities with - the Convict Indents. From 1815, the ship’s Surgeon-Superintendent was appointed by the Admiralty and was responsible for the care, control and discipline of convicts during the voyage. Among other tasks to be undertaken on board, the surgeon was instructed to record in his own journal each convict’s country of birth and their literacy, distinguishing between those would could read, read and write, or do neither, noting improvement on the voyage. This replicated some of the material already collected in the Hulks and other places of confinement, and may have imposed on convicts a sense of being tested (which they would be again before disembarking in the colony).

Furthermore, Governor George Arthur stated to the Molesworth Committee in 1837 that, in addition to delivering the indenture, the Surgeon-Superintendent also conveyed a comprehensive "hulk list" which Arthur speculated was drawn up by the surgeon himself. This was not attested to by any of the surgeons interviewed by Molesworth, but might hint that overseers from the hulks and gaols provided their own documentation when releasing convicts into the surgeon’s care, as might be expected. What Arthur outlines is far more detailed than any record hitherto specified, augmenting earlier evidence with marital status, trade, character from the gaoler, character from the hulk, "alleged qualification what he is able to do", as well as a summary statement of behaviour on board.

There is thus some overlap with Prison Registers 1770-1951 and Hulks Registers 1801-1879, Assignment lists, and other record series that list convicts by ships, such as the British Transportation Registers 1787-1867.

Convict Indents were foundational documents for other record sets. Selected contents were repeated, for example, from 1827 at the start of the Conduct Records (CON 31-4, CON 40-41), a Tasmanian innovation. In Tasmania, there is also overlap with Description lists (CON 18-19), and Registers and Indexes of convicts (e.g. CON 22-26). In NSW there is overlap with Lists of Convicts (NRW 1151, microfiche 625).

Convict Indents are one of the most detailed record sets on non-elite people in British history. The number of extant records is formidable. Information is included in the "Convict Indents (Ship and Arrival Registers) 1788-1868" on 87,307 convicts transported from England, Wales, Scotland and Ireland or a British territory, to one of the Australian colonies. This is just over half of all those exiled - the incomplete coverage is due to sampling of the available records, not because of the survival of the records. The breakdown of those included is as follows:

Coverage of the "Convict Indents"

There is thus incomplete coverage of ships and colonies. This means the data are not representative. In particular, any comparative work requires a weighting factor to be applied to NSW males (x3) and to VDL males (x2) to obtain rough-and-ready estimates. (Rough, because it assumes the missing men are fundamentally the same as those whose records have been collected and this may not be true.) Note, the database does not include records for convicts transported directly to Norfolk Island, Port Phillip or Moreton Bay.

Data collection from the Convict Indents has been ongoing since 1986 and has involved many researchers supported with funding from the Australian Research Council. Priorities in the collection of variables did change over time, and not all available information has been collected for every convict. For example, description of eye and hair colour was rarely recorded. Reference to original records, many of which are now available online, is likely to yield further material. Of course, there will also be transcription errors.

Most Convict Indents included in this database (over 85 per cent) are drawn from:

Where Convict Indents could not be located, or were damaged, an attempt has been made to assemble lists from other sources. These include: Musters and Papers 1824-25 in State Archives and Records NSW Fiche 658; HO11 via the AJCP microfilms (the Australian Joint Copying Project (AJCP) which commenced in 1945 microfilmed relevant British documents held in the National Archives and local collections. These are available through State Libraries and many other major institutions); Convict Indents 1788-1812 to NSW, Society of Australian Geneaologists CD-ROM; Tasmanian Archives Online search engine.

Many researchers have been involved in collecting and entering the data on convict labourers: Deborah Oxley, David Meredith, Patricia Curthoys, Jasen Burgess, Aslam Assam, Tami Wassner, Jen Wilson, Alison Tucker, Karen Hutchings. The project was based at the University of New South Wales. Funding was provided through an Australian Commonwealth Government PhD Scholarship (Oxley) and by the Australian Research Council: