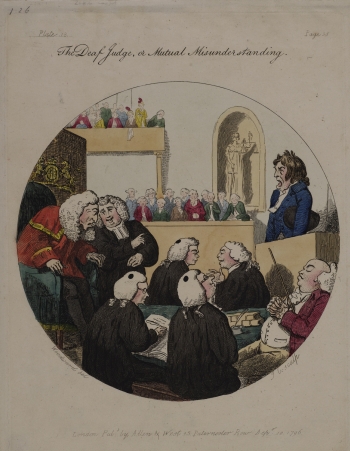 Offenders who had been convicted and sentenced by the courts were permitted (along with their families and friends) to petition the crown for the reduction or revocation of their sentence. Such petitions were usually sent directly to the Home Office, who acted on behalf of the crown, or otherwise the trial judge, the king or the Privy Council. In other instances, petitions were passed up through the social hierarchy (for example from the offender’s employer to the local Sheriff and then on to their Member of Parliament etc.), meaning that some petitions might include several covering letters and references by the time it reached the Home Office.

The petitions can vary a great deal in length and format, from simple letters to more elaborate appeals. In many instances, they provide some of the richest detail available on the lives of tens of thousands of offenders. In putting forward the grounds for mercy, petitions often provide details of the offender’s life and circumstances at the time of the crime. Attached to some petitions are related papers and returns made by the governors of convict prisons of convicts recommended for early release for good behaviour. 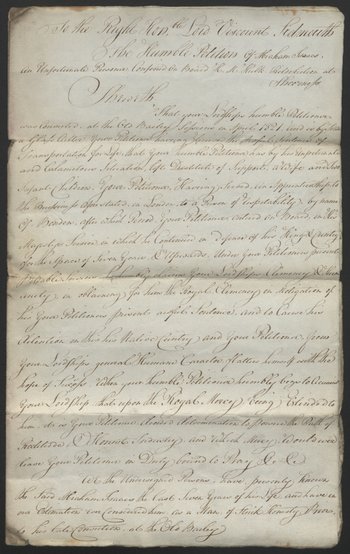 The pardoning petitions were compiled following the trial, conviction and sentencing of offenders, as part of the pardoning process. They include many cases tried at the Old Bailey, and should therefore link to several other sets of records included in this website that detail such trials and other aspects of the pardoning system.

Many of those who petitioned the Home Office for mercy were subsequently the subject of a judge's report, and correspondence relating to the pardoning process in such cases might also be found in the Home Office Criminal Entry Books 1782-1876.

The three record sets of pardoning petitions included on this site provide basic details of every pardoning petition contained within the HO 17, HO 18 and HO 19 files held at The National Archives. Each record gives at least a brief note of the name of the convict and the date of the record. In many instances the offence, sentence and place of trial are also given. As such, the records often provide little additional information on the convicts beyond that found in other records on this site.

However, the records do in themselves indicate whether an Old Bailey convict (or someone on their behalf) subsequently petitioned the Home Office for mercy. And through the links provided, users can (via a Find My Past subscription) view images of the original petitions, which frequently contain a wealth of information on the convicts that is not available elsewhere.

The original pardoning petitions can be found at The National Archives, Kew (London), under catalogue references HO 17, HO 18 and HO 19.

Databases of all the individuals listed in HO 17, HO 18 and HO 19, along with images of the original records, are available from Find My Past.

With the kind permission of Find My Past, those databases are reproduced in summary form on this website.