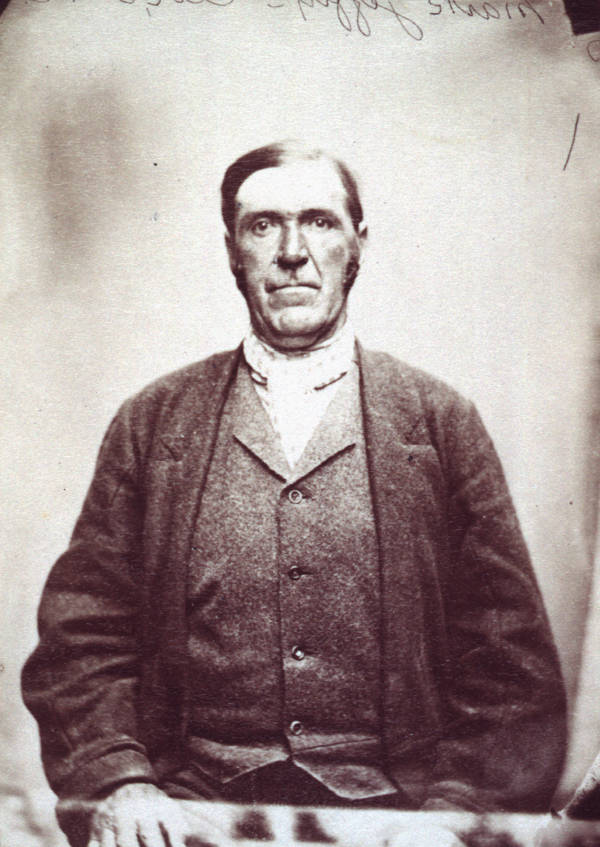 Described as a ‘giant’, Mark Jeffrey led an extraordinary life, experiencing imprisonment at both ends of the globe. His enormous appetite meant that he was bad-tempered and uncontrollable as far as the authorities were controlled. Already in custody for his robbery in 1848, an argument over food rations quickly transformed into a murderous assault for which Mark was transported for the term of his natural life. As a convict he endured the notorious Port Arthur penal colony, working there as part of his sentence as the colony gravedigger on the Island of the Dead, and then again as a patient when the institution was altered from prison to infirmary. His was truly one of the more remarkable lives in our database.

Mark was born in 1825 in Newmarket. His father was a successful gardener who was insufferably violent to his family when in drink. Mark ran away from home with his brother aged 15 and worked at fairs around the Fens. He learnt his trade as a hawker of knives and amateur boxer, but was mixing with card-sharps and con-men; and in his late teens he started to drink alcohol to excess. Mark was a relatively successful prize-fighter on the circuit befriended champion pugilist Bendigo Thompson. Mark put his fighting skills to good in several altercations with his mothers new partner before fleeing to join a group of burglars who preyed on London society.

After a spate of offences, Mark was convicted of burglary and sentenced to 15 years’ transportation. He along with his brother and co-defendants was sent to Millbank prison to await an available ship for the voyage. An unruly prisoner he refused to work on Sundays for religious reasons and was kept in ‘black hole’ conditions at Milbank where he contracted cholera. Being sick he was barred from joining a ship to Western Australia (the same ship his brother is placed on incidentally) and was forced to wait longer on the Warrior Hulk at Woolwich.

Starvation conditions existed on the hulk because richer inmates could buy more food. Mark complained about the amount and quality of the gruel he was issued with, and was moved to the kitchen to help make the gruel himself, but he fought constantly with the other cooks. His rations were further reduced, and he reacted by hitting the second-mate of the Warrior, who was doling out the rations, with a piece of wood. He was charged with wounding and conveyed to Newgate prison (assaulting two more guards en route) to await trial at the Old Bailey.

During the trial mark stated that ‘I had lost four pounds in a fortnight, and three pounds before that, besides a stone and a half in Milbank; I did not get sufficient food to support my human nature; he is no more fit to be a doctor than I am to be a King’. Not impressed by this explanation for his actions, he was sentenced to 15 years transportation.

During the trial mark stated that ‘I had lost four pounds in a fortnight, and three pounds before that, besides a stone and a half in Milbank; I did not get sufficient food to support my human nature; he is no more fit to be a doctor than I am to be a King’. Not impressed by this explanation for his actions, he was sentenced to 15 years transportation. Mark wrote to the Secretary of State asking to be hanged instead of transported. His request was refused. Taken to Pentonville in a straight-jacket still complaining about lack of food, Mark demanded an extra pint of porter and an extra loaf of bread each day to sate his hunger. Transported to Norfolk Island on the Eliza in 1849, he was employed as a gardener, and seems to have done quite well until one day he was refused a second helping of a meal by the chef at the house, Mark attacked the chef and “beat him until he could no longer move”. After punishment for this offence, Mark quite remarkably found employment as a police constable (probably because of his height, and general toughness). However, Mark was soon dismissed for failing in his duty. Mark was put to work with several gangs on the island, but remained a troublesome and violent prisoner. When Norfolk Island closed, he was transferred to Port Arthur, the notorious site of secondary punishment in Van Diemen’s Land.

Mark’s green fingers were once again put to use, and he was assigned work in the Chaplain’s garden. In order to improve his efforts, the Chaplain gave him 10% of the profits of selling the potatoes he grew when they were sent to the Victorian goldfields.

Mark demanded a ticket-of-leave at sword-point and seems to have been given his freedom in the early 1850s. However, he was not at liberty long. In 1856 as he was returning home after a night’s drinking, and after a series of rows with local people, he ‘playfully’ slapped a police magistrate. His Ticket-of-leave was revoked and he was returned to Port Arthur. The Governor of Port Arthur considered that Mark’s time would be best spent helping constables in northern part of Port Arthur territory. For a time Mark got on well, selling snared kangaroos to locals in partnership with the constables. He was again conditionally released. Over the next decades, although the convict era had come to an end, Mark was found guilty of assaults throughout Tasmania and returned to gaol many times. In 1871 he fought a man in a pub who had insulted him, culminating in the man’s death, and Mark’s conviction for manslaughter. Mark was sentenced to life in prison, and returned for a third time to Port Arthur.

In order to separate him and keep him away from other prisoners, Mark was sent to work as the gravedigger on Port Arthur’s “Island of the Dead” where dead convict were laid to rest. Although he was happy with his exile, having the ability to bake his own bread, and having sufficient food, Mark claimed to suffer from nightmares, seeing the Devil stalking him. In general as Mark aged his health, both mental and physical, was poor. As a result he was released into the care of Launceston Invalid Station. Rather surprisingly he was a popular patient, and in the 1890s he became the General Controller of the Station.

In 1893 he fell into ill-health again, and when interviewed by a local newspaper, he pointed to his chest with a grim smile, "I have my death warrant here”. However, he did not actually die until a decade later, in 1903, aged 68 in an invalid depot in the north of the colony. Before then he had time to write his own autobiography. He was buried in Launceston, and thankfully avoided being buried in the grave he had made for himself on the Island of the Dead (it remained open and unfilled for years after his death.

Mark is hailed in contemporary documents as a “Giant of a man” at 5’ 11”. He was taller than the average man (ie 5’ 4”) and, taller than most convicts licensed during this period. Mark’s hunger appears to have been at the root of much of his violence and argumentative nature. Food for convicts like Mark was certainly not plentiful. The control of food was a strong disciplinary tool for the regime, and each morsel was weighed and measured so that it conformed with the statutory prison diet. Moreover, if prisoners were guilty of prison ‘offences’ as Mark was, they were relegated to a different ‘stage’ with consequent reduction of food. Most seriously, this could involve a penal diet of bread and water for several days in solitary confinement. Mark suffered many of these dietary punishments, yet extreme reactions to food deprivation, like mark Exhibited, were not common. Perhaps his behaviours hint at a larger undiagnosed physical or mental condition.

• Jeffrey, Mark., A burglar's life; or, The stirring adventures of the great English burglar, Mark Jeffrey: A thrilling history of the dark days of convictism in Australia (J Walch and Sons, 1893)

This page was written by Barry Godfrey with additional contributions by other members of the Digital Panopticon project team.