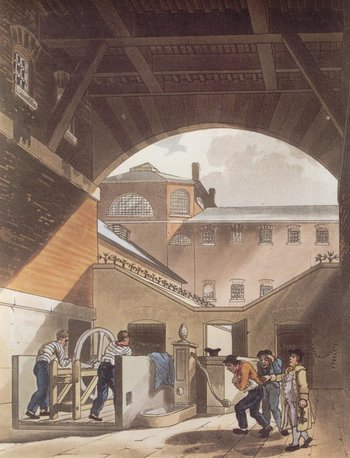 This dataset contains names and other details of prisoners who were tried for non-capital offences at the Middlesex or Westminster Sessions of the Peace and held at the House of Detention in Cold Bath Fields (Clerkenwell) between 1836 and 1889. Additionally, it also includes the details of a smaller number of prisoners held in the Westminster Bridewell from 1838 to 1847.

The Middlesex and Westminster Sessions of the Peace tried a wide range of non-capital offences, including both felonies and misdemeanours. The Middlesex Sessions were unusual in that they were held at least eight times a year rather than four, reflecting the very large amounts of business conducted by the court. However, like other quarter sessions the bench consisted of county magistrates.

Those tried at the Sessions appeared before the court either as prisoners (held in the House of Detention or Westminster Bridewell), or as defendants on bail. Only the prisoners, those who were denied bail or unable to find sureties to guarantee their appearance in court, appear in these records.

The Middlesex House of Detention (New Prison) at Clerkenwell was originally built in the late seventeenth century as a gaol for prisoners awaiting trial at the Middlesex Sessions who could no longer be accommodated in Newgate. It was enlarged and rebuilt in the late eighteenth century and again in the nineteenth century, as the population of prisoners expanded and standards for their confinement changed. The prison finally closed in 1886. The Westminster house of correction (or Westminster Bridewell) at Tothill Fields had even earlier origins; the first buildings were erected in the early seventeenth century. The new prison, built between 1826-1834 near Vauxhall Bridge Road, held remand and convicted prisoners.

At the beginning of each Middlesex or Westminster Sessions the clerks drew up lists, or calendars, of the prisoners held in the relevant prison who were to be tried at the Session. Originally, the calendars were handwritten. However, the nineteenth-century calendars, described here, were printed as small pamphlets. These had increasing amounts of information about prisoners as the century progressed. The calendars before 1855 include age, charged offence, literacy (from 1848) and the magistrate who committed the prisoner. From 1855, they also include occupation, verdict and sentence (including postponed sentences and information about cases referred to other courts including the Old Bailey), and previous convictions. They can also include handwritten annotations of various kinds. 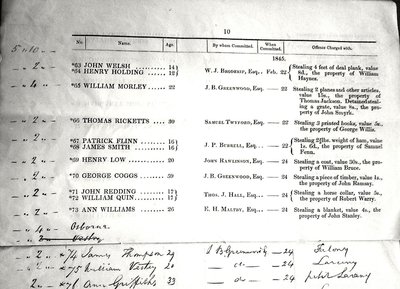 Where present, information on previous convictions may be used to trace previous appearances in the Old Bailey Proceedings 1740-1913 and other sources that contain records of trials, such as the England and Wales Criminal Registers 1791-1892. Some trials at Middlesex and Westminster Sessions were reported in London newspapers (not included on this website), which can provide more context for offences and personal information about the prisoners.

Convicts who were sentenced to imprisonment in national or county prisons may be found in the records of imprisonment.

The chief strengths of these Calendars are that they provide a valuable source of information on the less serious offences which were not tried at the Old Bailey, and they include evidence of previous convictions from c.1855 (though trial locations are not consistently included until 1861).

However, they are not comprehensive. There is no way of knowing how accurate the lists of previous offences were, and they do not provide a full record of convictions for petty offences in Middlesex and Westminster. Defendants who were tried on bail, and those tried summarily in the Police Courts, are not included. The Calendars provide only a brief record of offences and outcomes, with no further detail on the decision-making processes that led to prosecution or conviction. Early Calendars in particular provide very little information beyond the age and charged offence of prisoners, although outcomes are sometimes added as handwritten annotations, and the Calendars become progressively more detailed over time.

The dataset contains three series of records held at the London Metropolitan Archives:

The transcriptions of the Calendars were produced using Optical Character Recognition to at least 99 per cent character accuracy (with some manual checking), but the quality of the digitised text can vary depending on the condition of the originals. Further problems could arise from the complexity of the tabular layout of the Calendars and frequent lack of horizontal white space between entries.

Digitised images were supplied by the London Metropolitan Archives and transcribed by the Digital Panopticon project. The transcribed data are available for download through the University of Sheffield Data Repository, figshare.

This page was written by Sharon Howard and Robert Shoemaker, with additional contributions by other members of the Digital Panopticon project team.