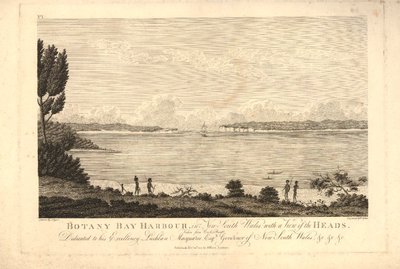 "NSW Early Convicts Index 1788-1801" are records of the earliest convict indents and lists documenting about 12,600 convicts' arrivals in New South Wales. Early indents provide name, date and place of trial and sentence. Later indents usually contain more information such as a physical description, native place, age and crime. Some records also have annotations relating to certificates of freedom, tickets of leave, pardons and other information about the outcome of a convict's sentence. The names index links to digitised images.

"NSW Convict Applications to Marry 1825-1841" are the registers recording key details about the parties applying for permission to marry, including: their names; their ages; the date of permission or refusal; ship of arrival; sentence (for the party who was the convict); whether free or bond and the name of the clergyman. The records include applications for January 1826 to April 1833 and January 1838 to March 1841.

"NSW Convict Exiles 1849-1850" is an index of convicts who were exiled to New South Wales after serving part of their sentence in a penitentiary in Britain, following the official end of transportation to the colony in 1842. They were granted a conditional pardon or ticket of leave on arrival in the colony. The records include the individual's name, ship and year of arrival, date, and (if known) place of trial and sentence. Infrequently, this may also include information on offence, employment, marriage, death, or record certificate of freedom or pardon numbers. 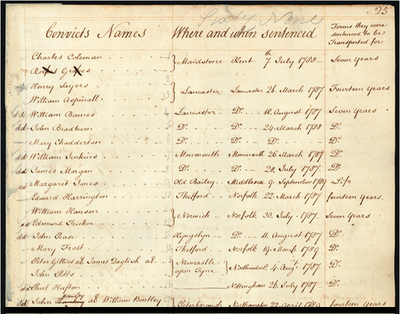 A page from the Early Convict Indents Index. © State of New South Wales through the State Records Authority of NSW 2016.

Many of the convicts listed in these indexes were tried at the Old Bailey and therefore appear in the Old Bailey Proceedings 1740-1913. Old Bailey convicts held in Newgate should also be found in the Newgate Calendars of Prisoners 1782-1931 and England and Wales Criminal Registers 1791-1892 (from 1791). If they had originally been sentenced to death, they may also appear in the Petitions for Pardon 1797-1858, Judges Reports on Criminals 1784-1827, Home Office Criminal Entry Books 1782-1876 and Capital Convictions at the Old Bailey 1760-1837 records.

If they were held in the hulks while awaiting transportation they may also be found in the Hulks Registers 1801-1879. The majority of the convicts in the New South Wales indexes should be listed in the British Transportation Registers 1787-1867.

The "NSW Early Convicts Index 1788-1801" can be expected to overlap substantially with the Convict Indents (Ship and Arrival Registers) 1788-1868, with the added advantage of linking to images of the records.

The indexes cover a range of records relating to the sentence of a convict transported to New South Wales covering the entire period of transportation to the colony. However, apart from the "NSW Early Convicts Index 1788-1801", the amount of information transcribed is variable and sometimes sparse. For example, the NSW Convicts Index 1791-1873 records only the existence of a convict's savings bank account, not the amount deposited.

The inclusion of large numbers of records of certificates of freedom, pardons, etc., make the indexes particularly strong on information about the final phases of convicts' sentences. Apart from the "NSW Convict Applications to Marry 1825-1841" index, the indexes contain few records pertaining to events during a convict's sentence (such as records of employment or conduct).

The records have been created by the State Archives and Records Authority of New South Wales from a range of sources, which are listed in full in the indexes' descriptions on their website. Much of the data was transcribed by volunteers. The data files used by Digital Panopticon were created by Tim Sherratt and can be downloaded from Github.

The "NSW Early Convicts Index 1788-1801" is part of the Sentenced Beyond the Seas project.