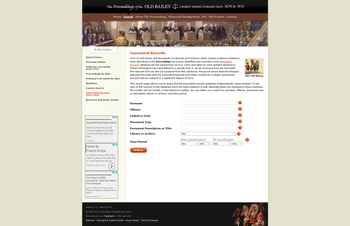 This record set contains descriptions of 37,000 printed and archival records relating to trials reported in the Old Bailey Proceedings. Accounts of the lives and exploits of notorious criminals were published as ballads, chap-books, and broadsides from the sixteenth century. These inexpensive publications were designed to entertain, and they reached a wide market. In the 1670s, perhaps as a result of growing concern about crime, there was an explosion of crime literature, including criminal biographies, the last dying speeches of executed criminals, Ordinary of Newgate's Accounts of the lives of criminals, and trial accounts. This record sets contains such sources from popular discourse, together with further allied records created in relation to trials at the Old Bailey.

This database was created by the Old Bailey Online project in order to supplement the information about trials and defendants contained in the Proceedings. It encompasses a wide variety of printed and manuscript records, of which the following are the largest and most significant categories: 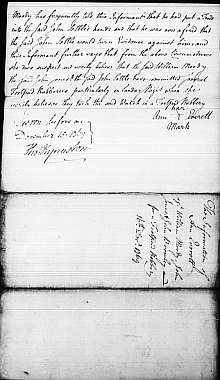 The majority of records are directly related to the Old Bailey trials and many were previously linked to defendants in an early experiment in automated record linkage. Others have subsequently been linked by the Digital Panopticon.

Some of the sources have subsequently been digitised and may be included elsewhere in the Digital Panopticon: for example, in Judges Reports on Criminals 1784-1827, Petitions for Pardon 1797-1858 and Home Office Criminal Entry Books 1782-1876. In these cases, the "Old Bailey Associated Records 1740-1834" record set may provide slightly different, complementary information.

The database contains a wide variety of references, but generally these consist of (at most) very brief descriptions of documents.

The complete Old Bailey Associated Records database, which can be searched at the Old Bailey Online, contains 49,000 records dated from 1674-1834. The database was compiled from a range of sources held at more than twenty libraries and archives. Information about location and source references is provided for each record.

Most of the records were compiled by the Old Bailey Online project; the Refuge for the Destitute data was contributed by Ben Bankhurst.