The Old Bailey Proceedings are the foundational source for Digital Panopticon. They contain published accounts of the criminal trials which led to the convictions and sentences for the 90,000 convicts whose lives are traceable on this website. Each trial account provides basic details about the offender, offence, verdict and punishment sentence, as well as some verbatim testimonies from those who testified at the trial.

A shorthand writer in the courtroom took down notes of each Old Bailey trial, and these were subsequently written up and published following each meeting of the court (sessions) and sold as the Proceedings...of the Old Bailey (eight times a year) or, from 1834, Proceedings of...the Central Criminal Court (ten to twelve times a year).

If found guilty, the age of the defendant is normally provided, as well as the punishment sentence of the court. Note that further information about the sentence was sometimes provided at the conclusion of the relevant edition of the Proceedings, and that the punishment listed was only the original sentence. These sentences were often subject to change as a result of royal pardons or decisions taken by judicial officials. Following the Life Archive of each convict will allow you to find out what punishment they actually received. 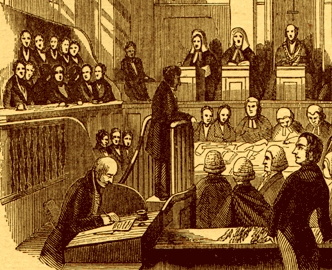 [Anonymous], "Reporting the Proceedings" (1842), from Walter Besant, London in the Nineteenth Century (1909). © University of Sheffield

Each prisoner tried at the Old Bailey was kept in Newgate Prison during their trial, so they should also be found in the Newgate Calendars of Prisoners 1782-1931 and the England and Wales Criminal Registers 1791-1892. These registers list everyone who was committed to the prison and they often provide additional personal details about the convict and information about his or her subsequent punishment.

Convicts who were eventually transported will be found in the British Transportation Registers 1787-1867 and/or the Convict Indents (Ship and Arrival Registers) 1788-1868. Those transported to New South Wales will be found in the New South Wales Convict Indexes 1788-1873 records; those to Van Diemen's Land (Tasmania) in the VDL Founders and Survivors Convicts 1802-1853 and VDL Founders and Survivors Convict Biographies 1812-1853 records; and those to Western Australia in the WA Convict Probation Records 1850-1868.

Prior to being transported, convicts normally spent time in the hulks, so may be recorded in the Hulks Registers 1801-1879.

The Old Bailey Associated Records 1740-1834 list additional records which are relevant to specific trials which took place up to and including 1834. 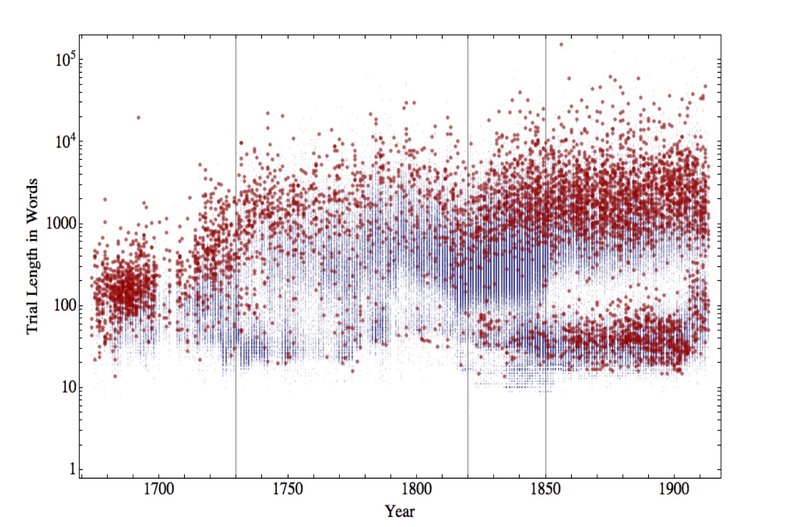 Length of trial accounts in the Old Bailey Proceedings for homicide trials (displayed in red) and for all other trials (in grey). © Tim Hitchcock and William J. Turkel as part of the Data Mining with Criminal Intent project.

The Old Bailey Proceedings provide basic details of virtually every trial which took place at the Old Bailey, though a small number of trials are missing (see Devereaux 2016). Each account provides at least a brief summary of the crime and the trial proceedings, while many trials provide extensive details about the nature of the offence, the method of detection of the defendant, witnesses’ accounts, the context of the case and much other incidental information.

However, despite appearances, the Proceedings are not transcripts. Owing to space constraints, even the longer accounts include only a portion of what was said at the trial. Extensive research has demonstrated that what is reported in the Proceedings was almost always accurate, but much material was omitted. Because something was not reported as having been said at a trial does not prove that it was not said. In particular, testimonies by lawyers and defendants were often severely truncated. Also infrequently included was the judge’s summing up, and any information about how the jury arrived at its verdict. And from the late eighteenth century, very little information was provided about trials for sexual offences (notably rape and sodomy).

For further information, see The Value of the Proceedings as an Historical Source.

Copies of the original printed publications of the Old Bailey Proceedings can be found principally in the Harvard University Library, the British Library and the Guildhall Library (London).

A full digitised edition of the Proceedings is available from the Old Bailey Proceedings Online.