In 1819 Thomas Prescott was transported to Australia for seven years for an unknown offence. He eventually settled in Australia and desisted from further criminal activity. Thomas’s tattoos reveal the identities and emotions of a young adult transportee.

Thomas Prescott was born in 1802 in London. Unfortunately little is known about his early life. At the age of 17 he was listed as a sailor.

In 1819, at the age of 17, Thomas was convicted of an unknown offence at the Middlesex Sessions of the Peace. He was sentenced to transportation to Australia for seven years, and while awaiting his sentence he served a brief term at Millbank prison (then operating largely as a depot for convict hulks leaving from the Thames). 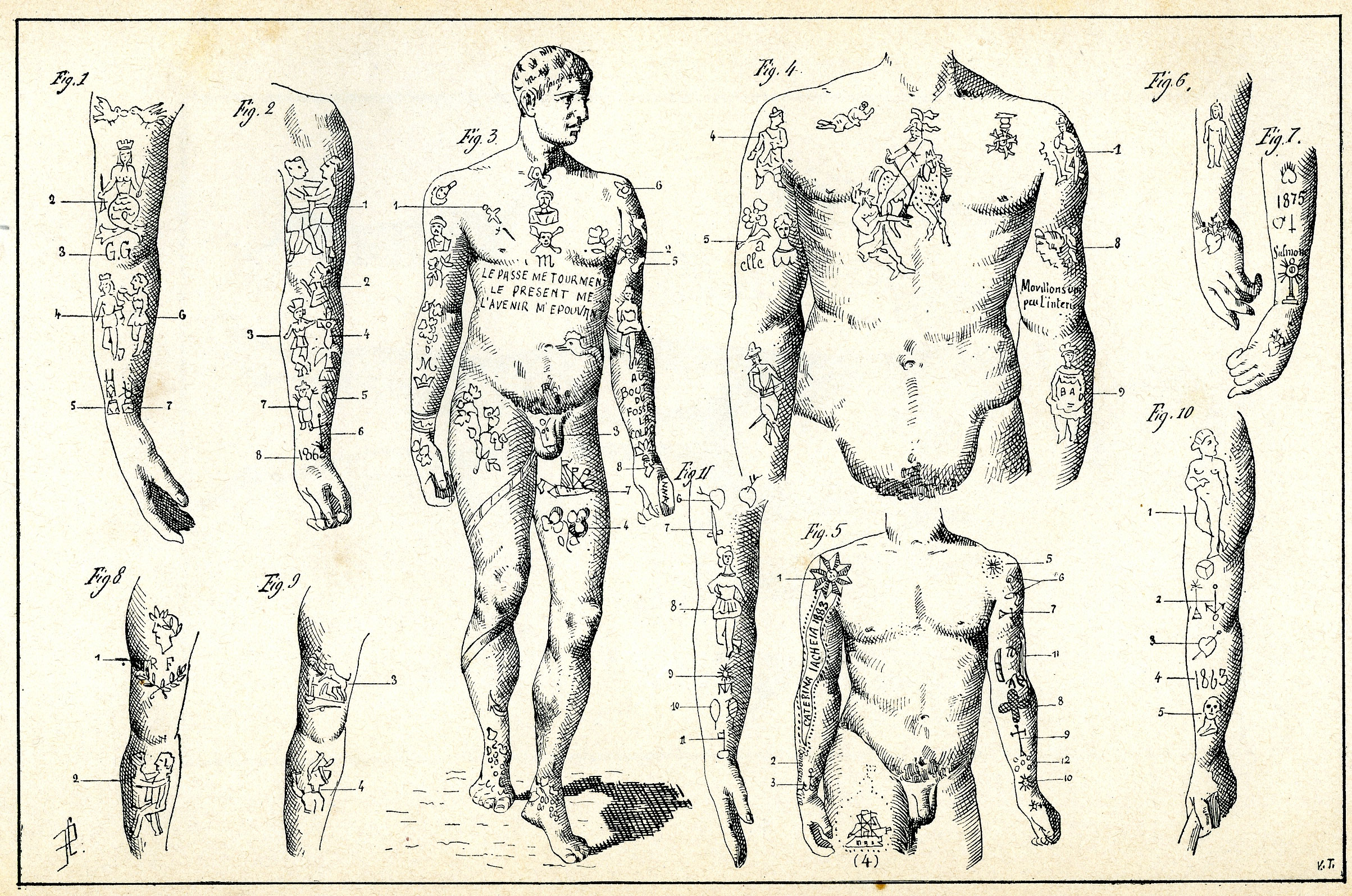 Thomas sailed on the Dromedary ship with 369 other prisoners for four months. He arrived in Hobart, Tasmania (then Van Diemen's Land) on 10 January, 1820.

Convicts with good conduct records were awarded freedoms (placed within a series of staggered constraints). Thomas was granted his certificate of freedom six years after his arrival in Australia and applied (successfully) to marry in 1831 aged 29.

On his arrival in Australia Thomas was recorded as having a number of tattoos on his arms, offering a unique window onto the elusive convict voice. Thomas wore many popular designs, which hint towards the identities and fashionable sentiments of working men in the nineteenth century. Thomas had acquired several tattoos by his 18th birthday, including, in the words of the clerk who recorded them: ‘anchor, mermaid, heart and darts, sun, moon and stars, right arm man woman heart jp sj laurel branch star and other heart and dart left arm crucifix man with dagger and pistol in hands on breast’.

Naval tattoos were hugely popular and Thomas’s use the designs of an anchor and mermaid, and astronomical symbols like the sun, moon and stars hints at the importance of his occupation as a sailor. The anchor was one of the most popular tattoo designs in the nineteenth century. Thomas’s other tattoos included hearts on his arms and hands. Tattoos which highlighted convicts' relationships with lovers, friends and family, worn in visible areas of the body such as the forearm and hands, were also very popular, since the journey to Australia forcibly separated them from their loved ones. Some elements of Thomas's tattoos are harder to interpret: it is not clear what the initials 'jp' and 'sj' stand for (though they were presumably loved ones) and the meaning of the dagger and pistol tattoo is unclear. Convicts’ emotional responses to transportation can also be understood through exploring their love tokens- small mementoes containing affectionate messages which were left behind with loved ones in the United Kingdom.

Thomas’s life archive shows that he married twice while in Australia. He was 29 years old when he married a fellow convict, Sarah Williams, in 1831. Williams, from Leytonstone Essex and whose occupation was listed as a housemaid who could 'plain cook, wash, [and] iron', had been convicted of pickpocketing at the Old Bailey in January 1830 and was transported to Australia the same year. Unfortunately, she died soon after (of unknown causes), and she was buried in February 1835. The following month Thomas applied to marry another convict, Sarah Emery, and they were married on 6 April 1835. Emery, a 'nurse girl'. had been convicted of stealing three cheeses in a shop at the Staffordshire Assizes and arrived in Australia in 1831 on the Mary convict ship. This was her second offence and her gaol report from England reported that she had a 'very bad' character, but the surgeon on her transport ship described her as 'quiet and orderly'. She was 4 feet nine and a quarter inches tall, with blue eyes, light brown hair, and a 'small' face.

Convicts required applications to marry between 1829 and 1858, and these were made by both men and women. By the early 1830s, the state sought ways to control the convict population, and marriage was encouraged as a stabilising influence. Marriage was popular amongst convicts, too; 16,747 people made at least one application to marry, and women were permitted to marry while still under sentence. Two-thirds of women had married within four years of arrival. Their average age at marriage was 26 years. In contrast, men found it more difficult to marry, since there were far more men than women in the colony. The average age at marriage of ex-convict men was 32 years and they married, on average, eight years after their arrival (Oxley, 1996). Thomas was lucky to marry twice. The ages of his marriages, 29 and 33, were typical, but the time elapsed since his arrival (11 and 15 years) was above average.

Little is known of Thomas’s later life, but he doesn't appear again in the criminal records. At some point he moved to Victoria, where he died 1869 at the age of 67, of dysentery. He was living in Kilmore Road, Heathcote. Thomas had remained a sailor all his life and was married at the time of his death. He had lived in Australia for forty years.

Life course historians and criminologists broadly agree that desistance from crime takes place away from the criminal justice system. Godfrey et al’s studies into the long-term outcomes of juvenile and adult offenders have demonstrated that it was the informal (work, marriage, family formation), rather than formal (punishment, incarceration), social controls that encouraged desistance. The potential for Thomas to commit crime again following his transportation was arguably mitigated by the stabilising factors he acquired in Australia, in particular, his long-term employment as a sailor and marriage to Sarah.

This page was written by Zoe Alker, with additional input from Bob Shoemaker.