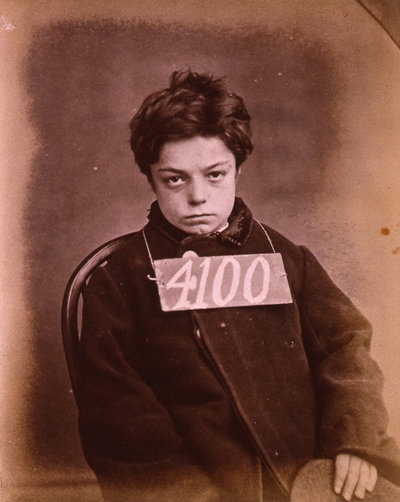 This record set consists of two albums containing photos and details of 626 prisoners held in Wandsworth prison from 1872 to 1873, which are part of a much larger collection of Home Office and Prison Commission prison registers and related records (PCOM 2) held at The National Archives of England and Wales.

The Photograph Albums usually contain a photograph of the prisoner together with other key information, such as their name, age, height, occupation, address, details of their conviction and their release date.

Local police forces in the 1850s and 1860s began to photograph their prisoners, but it took until the 1870s for the photographing of prisoners to become more common - largely as a result of the Home Office realising the advantages of doing this. Photographing London prisoners also appears to have been spurred on by the 1869 Habitual Criminals Act, which called for the collection of criminal records into a centralised system to allow for better identification and supervision of criminals. The creation and sustaining of the "Albums" was therefore part of the state's burgeoning efforts in the surveillance and identification of criminals.

Although prison registers often contained physical descriptions of prisoners, such as hair colour, eye colour and any distinguishing features, this information is not as accurate as an actual photograph. The photographs themselves were either taken in the police station or in a studio, although not all prisoners were willing participants, and in those cases the prisoner had to be restrained by a police officer whilst their photograph was taken. The earlier sets of photographs, such as the ones included on this site, generally included the prisoner’s head and torso whilst often cutting off the rest of the body, although some photographs could also include the hands or legs as well.

The information contained within the Prisoners' Photograph Albums were part of several collections of Prison Registers 1770-1951 that recorded details of prisoners – when first entering prison these records were likely to have been created at roughly the same time, and often much of the information contained within the Photograph Album can also be found on other prison calendars and registers as well, such as age, hair colour, occupation and so on.

Given that photographs were of convicted criminals, the prisoner’s trial may also be listed in the Old Bailey Proceedings 1740-1913 or in the Middlesex House of Detention Calendars 1836-1889. In many cases the photographs have names and personal details attached, and so it may also be possible to use this information to search the Census Returns for England and Wales 1841-1911, which can be useful in tracing peoples’ lives before and after their prison sentence. 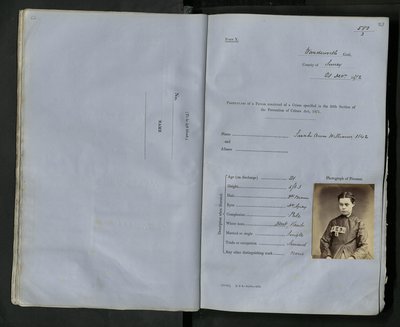 The "Prisoners' Photograph Albums" contain an unusual mix of visual and textual information that is probably unavailable almost anywhere else. In many cases, the photograph on a prisoner’s record is the only photographic evidence in existence for that person. Many other sources, such as prison calendars, may include rough descriptions of somebody's appearance, but photographs allow researchers to see the person for themselves. The nature of their appearance is compellingly conveyed, providing a more accurate depiction than basic descriptions of hair colour or complexion. Therefore, the "Albums" allow researchers to see prisoners in ways that no other source allows.

In addition, the "Albums" can provide useful textual information such as the prisoner’s address at the time of their arrest, and the address where they intended to live once they were released. Such address information can prove invaluable when searching through census data in order to locate a particular person. Even when this information is included in other sources, the "Albums" can be used to corroborate the data within them, helping to offset the inaccuracies in record keeping that frequently occurred during this period.

However, there are limitations. As mentioned previously, the "Albums" are naturally limited to the later decades of the period of study, as photographic technology was not readily available until around the mid-nineteenth century. Prisoners from before this time, therefore, will not have a photograph. Additionally, only criminals serving prison sentences had their photographs taken. The number of criminals found in the source is in turn restricted even further. The Digital Panopticon only returns 626 results from the "Albums", which appears a significant amount of people, but provides only a minute fraction of the 221,931 results from the Old Bailey Proceedings 1740-1913. As such, as a source, the "Prisoners' Photograph Albums" will only prove relevant in a small number of cases. Where it is relevant, though, the information provided can be invaluable.

The PCOM 2 collection, including the "Prisoners' Photograph Albums", can be found at The National Archives. They have also been digitised, and are available for search and download. They are also available at Find My Past.

Much of the research conducted for this page, and a first draft, were the work of Alex Traves, MA student in History at the University of Sheffield, 2016-2017. Sharon Howard subsequently developed the page, with additional contributions by other members of the Digital Panopticon project team.