After several periods of imprisonment in Newgate, William Prudence's life came to an end in the jail in 1796, one of hundreds of prisoners who died in Newgate in the later eighteenth and nineteenth centuries.

Little is known about William’s early life. He appears to have been born in London sometime around 1750 (some records suggest he was born in the late 1740s). But we lack any records on William until his first appearance at the Old Bailey in October 1779, at the age of about 29.

In this first appearance at the Old Bailey, William was charged with stealing a wooden box containing pocket books, at Bishopsgate Street in the east of the City of London (close to the present site of Liverpool Street station). He denied that he had taken the items, claiming instead that he had been asked to hold the box by another man, at which point he was wrongly charged with having stolen it. He was able to call some eleven witnesses, all of whom gave him a good character. The jury appears to have believed Prudence (or were unconvinced that there was enough reason to convict), bringing in a verdict of not guilty.

These themes were to be common ones in William’s subsequent list of four crimes and corresponding trials at the Old Bailey: seemingly opportunistic thefts; mostly carried out in the Bishopsgate area (from Leadenhall Market in the south to Spitalfields Market in the north); apparently well-known as a “suspicious” character; and the use of character witnesses and defence statements at trial.

Although William managed to mount a convincing defence in 1779, at his next appearance at the Old Bailey, on a charge of burglary in July 1784, he was found guilty on the lesser charge of stealing without breaking and entering, and was duly sentenced to transportation for seven years.

We can only assume that William served out the rest of his term on the hulks, for we again find him on trial at the Old Bailey in March 1793, now at the age of 43, on a charge of stealing loaves of bread from an unattended basket. He was apparently well-known to the officers of the recently-established Police Office in Shoreditch, who testified against him at the trial. But perhaps due to William’s cross-questioning of the witnesses and a character testimony given in his favour, the judge passed a relatively lenient sentence of six months’ imprisonment and a public whipping. Within a year of being discharged from prison, however, William was back before the Old Bailey, this time for the opportunistic theft of a cask of butter in Bishopsgate Street. William again launched a spirited offence, declaring “I have no witnesses but you and God”, and with a recommendation to mercy from the prosecutor, he was this time sentenced to fourteen days' imprisonment in Newgate and another whipping in public.

Some two years later, in June 1796, and at the age of 49, William made his fifth and final appearance at the Old Bailey, now on the more serious charge of stealing a collection of muslin gowns from a cart outside the Catherine-wheel Inn on Bishopsgate Street. In this instance William’s attempts to defend himself couldn’t prevent a sentence of transportation for seven years. After being sentenced in the court, William was sent back down to Newgate. On this occasion, however, he was not to leave the prison alive.

It is from the Home Office Criminal Registers that we learn most of what little we know about William Prudence’s personal details. He was apparently born in London, and seems to have spent much of his life in the east end of the City, with lodgings in Old Cock-Lane in 1796. From the Criminal Registers we also learn that William was 5’ 5” tall, with brown hair, a dark complexion and grey eyes.

He was one of many weavers who lived in the Shoreditch area in the eighteenth century; a group that were viewed with some suspicion by the authorities following the strikes and protests that many such weavers had taken part in in the 1760s. Whether or not William was involved in these disturbances (he would have been a teenager at the time), and whether this brought him to the attention of the judicial system, is not known. However, it is clear that William was well-known to the police officers and residents of the Bishopsgate area as a “criminal” character. In his trial of 1779, one witness referred to Prudence as a “suspicious” person. Another witness in 1796 declared that William was aware he was being targeted by “traps” from the Worship-Street Police Office. From what we can tell from the surviving records, then, William was an opportunistic thief who looked to sell the stolen goods on for financial gain. How many crimes he committed without detection we will never know, but it’s clear that he was “actively” policed by the forces of law and order.

On 18 October 1796, just a few months after his trial back in June, and still awaiting transportation, William was entered into the sick ward at Newgate, suffering from what the coroner’s records simply describe as a “fever”. He continued very ill for the rest of the day and until 10am the next day, at which point he passed away. The coroner’s subsequent inquest on 21 October duly and perfunctorily returned a verdict of “natural death”.

William Prudence was one of 728 prisoners who died in Newgate between 1788 and 1838 (excluding debtors). Some 428 of these, like William, passed away there whilst under sentence following a conviction at the Old Bailey, compared to some 87 individuals who were being held in Newgate whilst awaiting their trial. The vast majority, some 248 (58 per cent) of the 428 Newgate prisoners who died following their trial were, again like William Prudence, under sentence of transportation, with some 90 prisoners (21 per cent) meanwhile serving a term of imprisonment, and some 50 prisoners (12 per cent) condemned to death. Middle-aged and elderly offenders like William were particularly susceptible to dying in Newgate (perhaps unsurprisingly). Well over a third of all those who died in the prison between 1788 and 1838 (for whom we have age data) were over the age of 40, in stark contrast to the age patterns for Old Bailey defendants more widely, as shown in the graph below. In this regard, William Prudence was entirely typical of the Newgate dead. 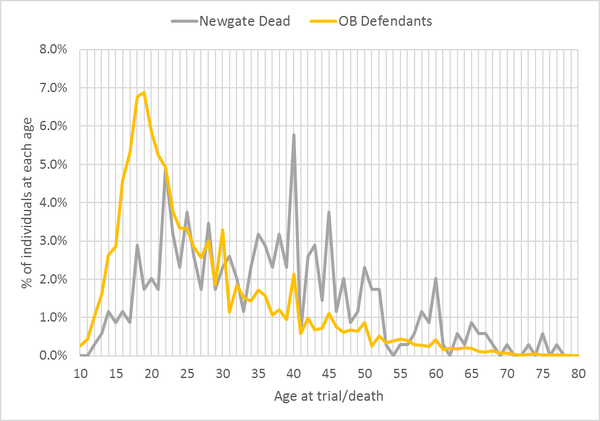 Age of prisoners who died in Newgate prison, 1788-1838. Digital Panopticon.