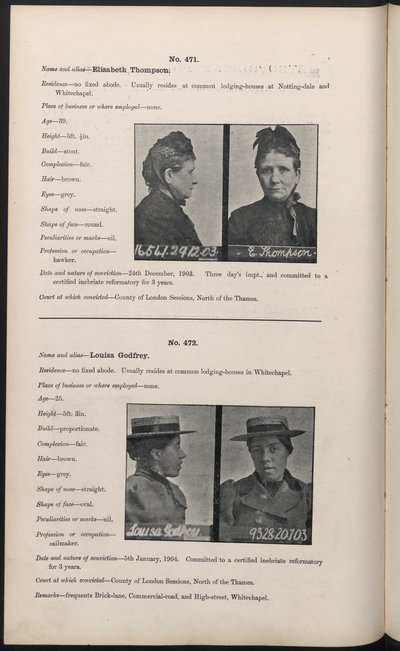 A database of more than 100,000 "habitual" criminals recorded by the Metropolitan Police on release from prisons in England and Wales between 1881 and 1925. The original registers were created as a means of supervising habitual criminals, circulating details of individuals around different police forces, and apprehending wanted offenders.

The registers were established following the 1871 Prevention of Crimes Act which gave the police powers to supervise and apprehend repeat offenders and those designated "habitual criminals". Information on individuals who had been convicted of more than two offences was collected by the police to help with both surveillance and future identification of known offenders.

From the 1880s, these registers kept a record of every habitual offender discharged from prison in England and Wales. The registers contain the name and known aliases of each offender, conviction and sentence details of the prisoner being discharged, along with information on any known previous convictions. The registers also contain detailed physical descriptions of prisoners and their intended destination after discharge.

The large amount of information recorded in the "Metropolitan Police Register of Habitual Criminals 1881-1925" records means that links can be made to several other records in the Digital Panopticon website. Offence and sentence details mean it is possible to find individuals from the registers with relative ease in the Old Bailey Proceedings 1740-1913 and England and Wales Criminal Registers 1791-1892. The records link particularly well to the UK Licences for the Parole of Convicts 1853-1925 since information regarding aliases, previous convictions, physical characteristics and residential addresses are often replicated in both sources.

Details of name, date of birth and address can also be of use in linking to the Census Returns for England and Wales 1841-1911. The registers only cover those imprisoned in England and Wales and commence after the end of the transportation period. As such, they do not link to the Australian sources included on this website.

The Habitual Criminal Registers were created for the purpose of enabling future detection of repeat offenders. As such, they contain a significant range of information that helps connect entries to other records of an individual’s life, both prior to conviction and post release. Information such as physical description contained in the register can be of particular use when trying to distinguish between convicts with similar details. The database also contains some of the only records which specify where a prisoner was discharged to at the end of their sentence.

Not all of the information in the Habitual Criminals Registers is useful for identifying individuals, or linking to other documents. Some fields of information can be vague. For example, while the registers often detail the number of previous convictions a habitual offender had, they do not always offer details of the nature or date of each offence and so have limited use when it comes to finding records of any such convictions.

The "MEPO 6 Metropolital Police Habitual Criminals Registers" are available in hard copy at the The National Archives. However, they are subject to a 75-year closure and some of the original records are in poor condition and not available to view. Page images, however, are available.

These images were transcribed by the Digital Panopticon project. This dataset is available for download through the University of Sheffield Data Repository, figshare.