Frederick Richardson was a habitual criminal who was convicted of violent crimes including robbery and wounding. Yet his tattoos and background reveal a more nuanced character than the 'violent rough' of the Victorian 'criminal classes'. 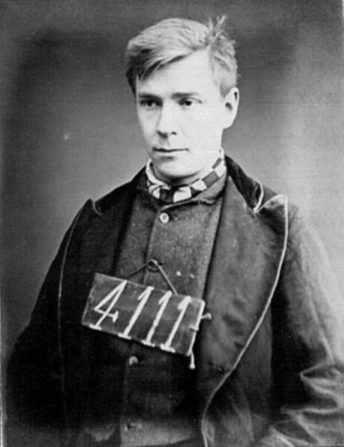 Little is known of Frederick’s early life except that he was born in 1851 in Shoreham, Norfolk. Shoreham was a small port in the nineteenth century, and employment was centred around highly casualised and precarious dock labour. The record of his first offence in 1872 noted that his address at the time of his arrest was in Rockingham Street, Newington Causeway, London.

Frederick’s first recorded offence was violent robbery when he was 21 years old. He was accused of stealing the watch of a carpenter in Garden Row, London. Pocket watches feature widely in goods stolen from street robberies since they were worn on the front of the body and could be removed quickly. Richardson was apprehended by the police and, following his trial at the Old Bailey, he wa ssentenced to nine months hard labour. Following his release, however, Frederick was convicted of a further five offences that included robbery, warehouse-breaking and wounding. Since by this time transportation to Australia had ended, Richardson experienced a serious in spells of incarceration in Victorian prisons.

In 1899, on his final conviction (for wounding at Lewes Assizes), he was placed on the Habitual Criminals Register. Under the 1871 Prevention of Crimes Act those convicted of more than two offences were deemed 'habitual offenders' and placed on a register in order to help the police with surveillance and future identification in case of future offences. Those, like Frederick, who were convicted of five or more offences were deemed 'persistent' (Godfrey, et al., 2007). Increasing concerns about recidivism among a threatening 'criminal class' led to the development of new ways of dealing with such offenders. Successive governments introduced a series of Parliamentary Acts which created tougher and longer sentences, more supervision and greater powers of recall to prison (Godfrey et al., 2010: 217). However given the high reoffending rates amongst habitual criminals in the nineteenth century, it is reasonable to argue that these acts did little to support offenders’ ability to desist. The stigma associated with imprisonment, and the destabilising nature of repeated cycles of incarceration alongside a lack of investment in welfare mechanisms such as education, housing, marriage and family formation meant that opportunities for ‘reform’ were scarce for men like Richardson.

An examination of Richardson’s social and personal worlds offers a nuanced perspective on the hardened offender and reminds us that criminals were often fairly ordinary members of the working classes who were workers, lovers and family men. At age 22, Richardson is described as a ‘labourer’ in the records. Labourer was an umbrella term which denoted a range of casual manual labour occupations that required men to be physically strong. (Richardson was relatively tall at five feet, eight a three quarter inches.) The boys and young men involved in street robberies and other violent crime often shared common ground as manual and semi-skilled workers and robbery was used to supplement meagre incomes. Men from the urban poor were marginalised from the social position occupied by the middle classes (and even the respectable working class), and the benefits they derived from a secure occupation and cultural status. The role of the hard man, which was available to men like Richardson, would have been particularly attractive.

But Richardson’s tattoo reveals a different side to his character and challenges nineteenth-century understandings of the hardened, habitual offender. Love was a very popular theme amongst tattooed convicts in the nineteenth century, and remind us of their broader social roles as loved ones and family members. Richardson wore, ‘F. RICHARDSON and NEEVE (indistinct)’ on his right forearm. We are unable to trace ‘Neeve’, who was perhaps an Irish lover. Richardson’s marital status is not documented in the records, but it is reasonable to assume that he was commemorating his love for a romantic partner, as many Victorians did.

Richardson was finally discharged from the Habitual Criminal Register in 1903 following a conviction for wounding in 1899 for which he served almost five years in Parkhurst prison. Parkhurst had initially opened as a prison for young male juveniles who were disciplined under a regime of strict moral, religious and physical training. But by the late 1890s when Frederick was admitted, Parkhurst had become a prison for invalids and other categories of adult convicts, and Richardson was identfied in the Habitual Criminals Register as 'weak minded'. But the prison system exacerbated rather than curtailed mental health problems through the application of discipline, surveillance and solitary confinement. It is not certain when Frederick died, but we have a death record for a Frederick Richardson in Salford who was 58 years old at the time of his death in 1909. This was just six years after his release from Parkhurst.

Frederick was a habitual criminal who committed offences until well into his middle age. His repeated cycles of imprisonment demonstrates that the prison system did little to achieve its aims in reforming prisoners like Richardson who was convicted of several violent thefts. Indeed, the stigma of punishment would inevitably have affected his ability to desist by preventing him from finding work and perhaps even secure housing. His work as a labourer was casualised and precarious, and his first offence at age 22 hints at the frequency of violence amongst young men in the nineteenth century. Robbery was rooted in social and economic deprivation and the occupations of violent robbers as casual labourers strongly suggests that robbing was used to supplement meagre earnings and, probably, the fluctuations of the casual labour market which dominated London’s Victorian economy. In the struggle to define themselves in this labour force, violent robbery was an alternative source of capital and status for men like Frederick. In addition, his tattoo which apparently expressed his love for a partner, Neeve, revealed that he was more than the sum of his convictions, but a working man living a difficult life.

This page was written by Zoe Alker with additional material from Bob Shoemaker.