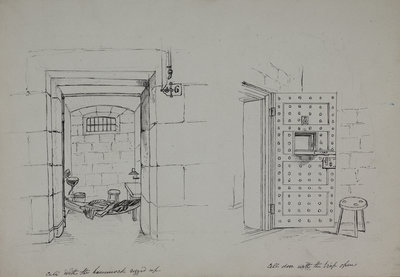 George Frederick Sargent, View of a cell with the hammock rigged up and cell door with the trap open at Pentonville Prison, Islington (c. 1842). Collage, record number 24629. © London Metropolitan Archives.

The "UK Convict Prison Captions and Transfer Papers 1843-1871" records provide details relating to 3,664 prisoners incarcerated within central government prisons in mid-nineteenth century England. The record set is based upon a series of prison "captions" and "transfer papers" that are now held at the National Archives in London (UK), under the catalogue reference PCOM 5.

In the nineteenth century, all government prisoners (those sentenced to imprisonment in one of the "convict prisons" run by the central government, such as Pentonville) were termed "convicts" - as distinguished from the individuals who were imprisoned in jails run by local authorities, termed "prisoners".

Detailed records were kept about such convicts. On conviction, the court wrote out out a "Caption" (an order of the court for the imprisonment or transportation of the offender), which named the individual and recorded brief details of their crime and sentence. These papers were written up by the trial judge and then handed to the officials who were charged with removing the convict to prison.

"Transfer papers" refer to the official documents that were created to authorize and record the transfer of a convict from one government prison to another. Such transfer papers contained a detailed record of the offender, their crime, background and a full record of the convict's time in prison. These records provide some of the most detailed information available on nineteenth-century convict prisoners, even including medical histories in some cases.

The "UK Convict Prison Captions and Transfer Papers 1843-1871" records provided on this website give summary details of the original captions and transfer papers. The database often simply summarises the name of the offender, the date of the record, their age, place of birth, occupation, date of death (if relevant), the place of trial, the sentence and the victim's name (if known).

The "UK Convict Prison Captions and Transfer Papers 1843-1871" will most likely link to the records of trial included on this site - particularly the England and Wales Criminal Registers 1791-1892 and (for London convicts) the Old Bailey Proceedings 1740-1913 - and to other records of imprisonment in the UK - particularly the Prison Registers 1770-1951 and the UK Licences for the Parole of Convicts 1853-1925. Those who were held in Newgate prior to their trial at the Old Bailey or following their conviction but before their removal to a convict prison, might be found in the Newgate Calendars of Prisoners 1782-1931.

The records as included on this site provide an indication that an individual is documented in the original captions and transfer papers.

Digital Panopticon does not provide a full transcript of the (often lengthy) original documents, which give a wealth of additional information. However, through the links provided, users can (via a Find My Past subscription) view images of the original captions and transfer papers to see the full details of the records.

The records of "Home Office Criminal Entry Books 1782-1876" included on this site (and even more so the fuller original documents themselves) offer a potentially useful source of information for finding out details about the imprisonment of convicts.

The original prison captions and transfer papers are held at the The National Archives (London, UK), under catalogue reference PCOM 5.

A database of summaries of the all the convicts mentioned in PCOM 5, along with images of the original documents, is available from Find My Past. A summarised version of that database is provided on this website with kind permission of Find My Past.