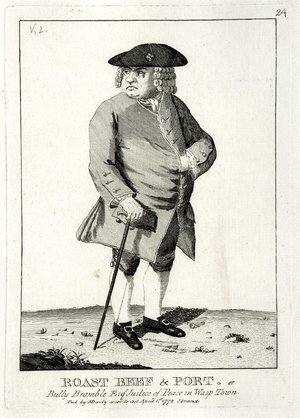 Following the detection and arrest of a suspect, those wishing to take the case further needed to do so by appearing before a justice of the peace (JP, or "magistrate", as they came to be known in the nineteenth century). They had a number of options available in dealing with criminal complaints. This included trying the offender summarily, dismissing the case if no crime appeared to have been committed or forwarding the accused on for trial by indictment. This pre-trial process underwent several important changes in personnel and practice between the eighteenth and early twentieth centuries.

Justices of the Peace

Justices of the peace - always men - were in many respects the "gatekeepers" of the eighteenth- and nineteenth-century criminal justice system. With no wage from the government, JPs had for centuries been entitled to charge small fees for their services, it being assumed that the landed gentry who typically took on the role would not actually depend on such payments, and thus dispense justice without financial incentives in mind.

In the eighteenth century, there were however growing complaints that such leading men of property were no longer taking on the onerous role of JP; replaced instead by a rabble of zealous and corrupt “trading justices” — lesser gentry and middling men who treated the honoured office simply as a source of income to be exploited for all its worth.

This bad reputation was mostly undeserved, but the complaints nonetheless led to the development of magistrates’ and police courts which sought to eradicate the problem of JPs treating their work as a "business", and instead make the pre-trial process more consistent, efficient, fair and "professional".

Up until the early eighteenth century, it was common practice in London (and elsewhere) for the suspect to be brought before the justice in his parlour. There, the complaint would be heard, depositions from the victim and any witnesses recorded, and a brief examination of the suspect taken as to whether they had anything to say in response to the charge. If the justice concluded that no crime had in fact been committed, they could dismiss the case out of hand. If it was proved that a felony had indeed been perpetrated, the justice was in theory obliged to commit the suspect for trial at the sessions of the peace or at the higher court of the Old Bailey, irrespective of the strength of the evidence either for or against the accused.

In certain types of petty offence, meanwhile, justices of the peace acting either alone or in small groups (at petty sessions) had the power to try the offender summarily, without a jury. Those judged guilty could be committed to a house of correction, such as the City of London Bridewell, or, in Middlesex, the House of Correction in Clerkenwell (known as the House of Detention from 1836) and Tothill Fields House of Correction in Westminster (see Middlesex House of Detention Calendars 1836-1889). 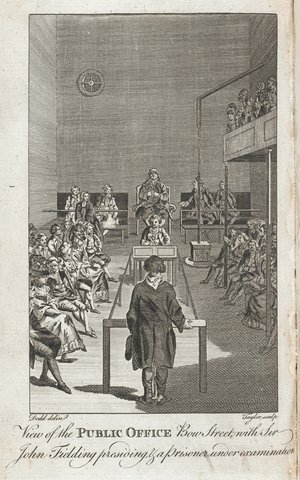 From the second quarter of the eighteenth century, however, the pre-trial process in London was increasingly transferred from the parlour and petty sessions to newly-established magistrates’ and police courts that operated on a more rationalised and regular footing.

The first of these magistrates’ courts was created by the Court of Aldermen in the City of London (who had the powers of justices of the peace) in 1737. The aldermen now sat in rotation daily at the Guildhall, to hear cases from the western half of the City, with the Lord Mayor hearing cases from the eastern half at the Mansion House.

The second such court was established in the 1750s by Henry and John Fielding at Bow Street in Westminster. The 1792 Middlesex Justices Act (32 Geo. III c.53) set up seven “public offices” across the metropolis to supplement the work of Bow Street. Each office was assigned three salaried justices and six constables. In 1800, an eighth office, the Thames River Police Office, was opened, with a wide jurisdiction for dealing with offences committed on the river and in the riverside area.

In the 1820s and 1830s, the formation of the Metropolitan Police (see Policing) prompted changes. In 1839, the format of what were now called Police Courts (though they continued to be presided over by magistrates) was fixed by the Act for Regulating the Police Courts of the Metropolis (2 & 3 Vict. c.71). By the 1850s, there were thirteen police courts in London.

The establishment of such magistrates’ and police courts led to a number of significant changes to the pre-trial process in London. Individual magistrates at the court heard a very wide range of criminal accusations, and in the case of the increasing number of petty offences, they had the power to act on their own to determine guilt and to order punishments.

But in more serious cases too, the courts started to conduct more in-depth, often public, pre-trial hearings, likely in an attempt to proactively vet cases. At the Bow Street office in the 1770s, for example, John Fielding carried out public examinations of the accused; dismissing defendants who were able to prove their innocence, and re-examining those under greater suspicion. These developments represented “what was essentially a new stage in the pre-trial procedure” (Beattie), one in which the jury courts' legal jurisdiction for determining the guilt or innocence of the accused in cases of felony was effectively being co-opted by justices at summary level.

Although the new pre-trial practices at Bow Street and elsewhere were criticised by some, they continued to be carried out and were even extended. Under the 1839 Act for Regulating the Police Courts of the Metropolis, justices could determine the guilt or innocence of those charged with unlawful possession of goods, suspicious behaviour, common assault, drunk and disorderly behaviour, vagrancy and gambling. The 1855 Criminal Justice Act (18 & 19 Vict. c.126) increased these powers of summary justice significantly, to include small thefts (up to the value of ten shillings), subject to the consent of the accused.

It is important to recognise how many criminal cases were judged by the magistrates’ and police courts: in 1855, they heard over 77,000 cases summarily, and forwarded some 19,000 for trial at sessions and courts (Davis). In that year, only 1,232 defendants were tried at the Old Bailey. The typical criminal case in the nineteenth century was not therefore heard at the Old Bailey, though the most serious crimes were.

Records of magistrates' and police courts survive erratically, and are not included on this website (the best sources for the business of the latter are nineteenth-century newspapers).

The Middlesex House of Detention Calendars 1836-1889, however, contain numerous references to defendants who had been previously convicted in these courts.

For the eighteenth century, the Bridewell House of Correction Prisoners 1780-1795 records list prisoners who were convicted summarily of petty offences in the City of London.

Some of the information on magistrates' courts was taken from Tim Hitchcock, Sharon Howard and Robert Shoemaker, "The Criminal Trial." London Lives, 1690-1800, version 1.1. https://www.londonlives.org/static/CriminalTrial.jsp, accessed 8 May 2017.

This page was written by Richard Ward and Robert Shoemaker, with additional contributions by other members of the Digital Panopticon project team.