A Guide to Researching Political Prisoners 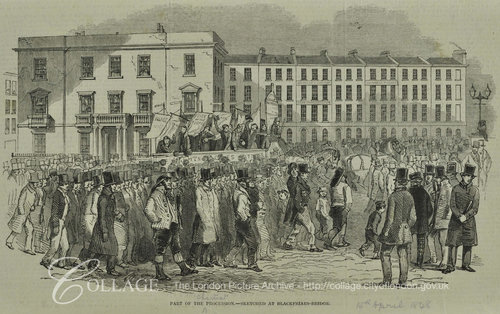 The Digital Panopticon contains a wealth of material on political prisoners. Since the records span well over 100 years, they are useful for exploring changes in the control of political dissent, as well as for tracking the lives of individual prisoners. This page gives an overview of how political prisoners interacted with the criminal justice system during the period 1780-1925, and suggests approaches for finding them in the website.

The period 1780-1925 saw many changes in how political dissent was expressed and controlled through legal channels.

In the late eighteenth century, political radicals were most likely to be prosecuted for “word crimes”, particularly for the offences of seditious libel and seditious words. Yet these offences were becoming difficult to prosecute, as society grew increasingly tolerant of debate and freedom of expression. So, by the mid-nineteenth century, we see the government increasingly opting for prosecutions relating to unlawful assembly, riot, and conspiracy, and using laws based on the notions of public nuisance and obstruction (Lobban). This shift reflected the growth of the mass political platform, famously central to the Chartist movement.

These legal changes were often pragmatic. As one piece of legislation became unusable, or as political dissent changed its form, the authorities would seek a new approach. Similarly, at certain moments of political pressure or perceived national threat, some offences were revived after years of disuse (Head, pp. 21-23). 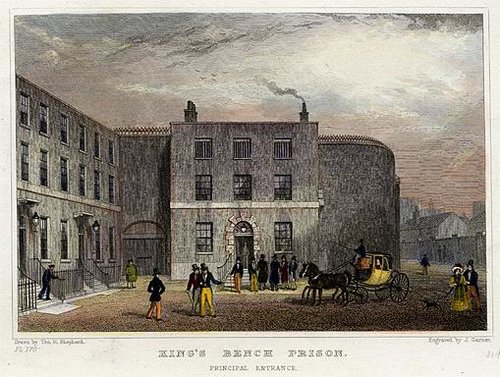 In the Old Bailey Proceedings, politically-motivated crimes are mainly to be found under two search categories: “royal offences” and “breaking the peace”.

Royal offences incorporate coining (actually a form of treason), religious offences, seditious libel, seditious words, seducing from allegiance, tax offences, and treason. Not all of these offences were politically motivated: in particular, coining and tax offences were not usually tied to a statement of political protest. Coining is overwhelmingly the most common royal offence on the website, so if you want to exclude it from search results, it may be worth searching under specific subcategories of royal offence.

Breaking the peace incorporates assault, barratry, libel, riot, threatening behaviour, and vagabonding. Again, some of the crimes in this category are not obviously “political”. However, the offences of riot and libel were sometimes used to control political dissent, especially during the nineteenth century.

What kinds of political prisoners are on the website?

The Old Bailey heard London’s most serious cases: felonies and some serious misdemeanours. This meant that the most serious political offences committed in London, such as treason, were tried at the Old Bailey. However, political offences tried as misdemeanours were likely to be heard elsewhere, for example at the Court of King’s Bench or at local sessions of the peace.

It is difficult to generalise about which political crimes were tried at the Old Bailey, and therefore which ones may be found on the website. This is because of the shifting nature of political crime: offences such as seditious libel and seditious words were not consistently prosecuted as either misdemeanours or felonies, and instead their status changed over the period. For instance, the Treasonable and Seditious Practices Act of 1795 stated that seditious offences were “high misdemeanours”, while the Treason Felony Act of 1848 upgraded them to the status of felonies. At other points again, they were misdemeanours under common law. This means that we don’t find these crimes consistently appearing (or not appearing) at the Old Bailey.

The Old Bailey Proceedings also excludes cases brought by special commission. This includes certain political cases, including the treason trials of 1794. However, individuals tried by special commission may still be found in related datasets, such as the Old Bailey Associated Records and the Newgate Prison Calendar, so it is worth widening your search to include those datasets. Records of the 1794 defendants - such as Thomas Hardy and John Thelwall - appear in these datasets, even though their trials are not recorded in the Old Bailey Proceedings.

Defence counsel had been permitted in treason cases from 1696, when it was argued that defendants were unfairly disadvantaged in treason trials. In felony cases, defence counsel was introduced and gradually became more common from the 1730s onwards (Beattie, p. 224-5).

However, some political prisoners chose to conduct their own defences even when they could have been represented by counsel. Sometimes this was because of a mistrust of lawyers, or because the prisoner wanted greater control over the case, or because they wanted to mount a defence based on principle rather than legal technicalities. The trial gave these defendants a platform to promote their ideas, sometimes with the intention of publishing the trial (or the defence statement on its own) afterwards.

Defendants in seditious libel trials would also often read out passages of the prohibited material during their defences, so that it could – quite legally – be reprinted as part of the trial proceedings. The controversial character of these speeches meant that they were sometimes censored from the official Old Bailey Proceedings record. For example, in the 1822 trial of William Vamplue (Vamplew Holmes) for libel, the report simply says: “The prisoner read an exceeding long defence; and read the whole of the pamphlet, from which the libellous matter was extracted – declared the whole to be his own sentiments, and attempted to justify every part.”

This kind of official censorship is an important part of the story of political prosecutions. To find the defence text itself, it’s often worth extending your search to other sources. Vamplue and his associates (he worked for the freethinker Richard Carlile) went on to publish their own edition of his trial. 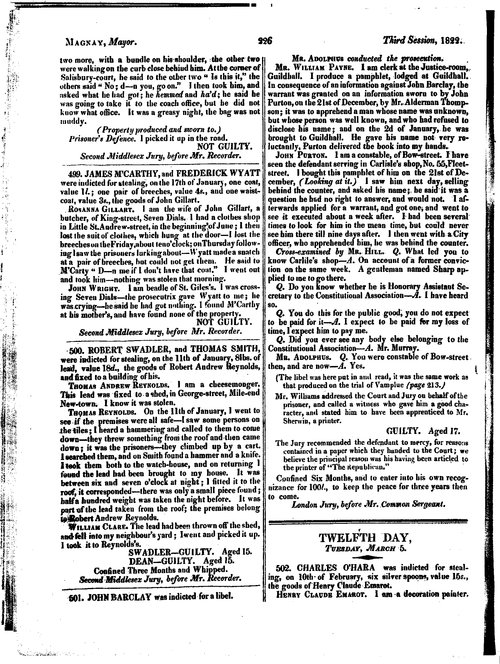 Punishments varied substantially across the period, and we can see this reflected in the records on the website. At moments of greater political pressure, punishments were more likely to be severe. For example Humphrey Crawley, was sentenced to death for attempting to seduce a soldier from allegiance during the Napoleonic wars (although he was eventually pardoned).

Treason remained punishable by death throughout the period, although the last sentence of hanging, drawing and quartering was meted out to the Cato Street conspirators in 1820 (they were hanged and decapitated). During the nineteenth century, prisoners convicted of treason often either had their death sentence commuted to transportation, or were given a lesser sentence in the first place, such as transportation or penal servitude.

Political Crime and the Digital Panopticon

Political offences have always been in the minority compared with crimes such as larceny. However, the ebb and flow of prosecutions is interesting to track, since it often corresponds to the changing socio-political context. "Seducing from allegiance" is a relatively rare crime, but it was revived at key moments of military and political stress (see also Head, pp. 108-118). The Historical Background pages on Digital Panopticon give an overview of this changing context, as well as providing a rich source of information on how prisoners of all kinds experienced the different stages of the justice system, from pre-trial to punishment.

The Digital Panopticon website also allows us to drill down into an individual's involvement in political crime. The trial records in the Old Bailey Proceedings can help us to understand political prisoners’ attitudes to their offences, especially if they treated the courtroom as a platform for communicating their principles. Post-trial records can also provide insight into their experience of the justice system, for example if they petitioned or were pardoned. The Chartist George Shell, for example, wrote a revealing and scathing letter to the Home Secretary protesting his prison conditions: “Several communications have from time to time been addressed to you by the Political Prisoners confined in this Gaol complaining of the Shamefull [sic] and Unjust conduct & treatment to which they are, & have been subject by the Persons in Authority here”.

This page was written by Fiona Milne, a Ph.D. student in the Department of English and Related Literature at the University of York, currently undertaking a thesis on "Censorship, Character, and the Political Courtroom in Radical British Writing, 1792-1825".