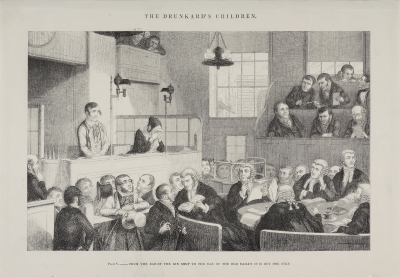 George Cruikshank, The Drunkard's Children (c. 1847) - showing the interior of the Old Bailey with the drunkard's children in the dock for robbery under the influence of alcohol. Collage, record number 26626. © London Metropolitan Archives.

As with all periods in history, there were many illegal acts which could, if detected (and the perpetrator was prosecuted) appear as "crimes". However, the vast majority of crimes were never prosecuted. Modern historians can sometimes study unprosecuted acts of violence or theft, but this is more difficult for historians of the eighteenth and early nineteenth centuries. Many acts we would describe as crimes today - sexual predation or domestic violence, for instance - were largely unprosecuted before the mid-nineteenth century, as were many minor property offences. We cannot, therefore, estimate the number of domestic violence incidents that took place. In fact, we can only determine the number of prosecuted crimes from 1856 onwards, when annual statistics were published.

The vast majority of crimes prosecuted between 1780 and 1925 were property offences, and many of these offences, including larceny, pickpocketing, burglary, and robbery, changed little. But there are some significant differences in the commission of crime and the apprehension of offenders that took place over the period covered by the Digital Panopticon. 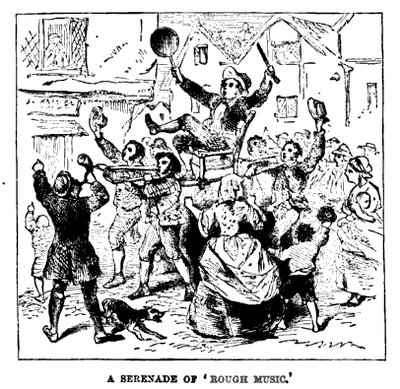 [Anonymous], "A Serenade of 'Rough Music', in Robert Chambers, The Book of Days: A Miscellany of Popular Antiquities in Connection with the Calendar (1832). From Wikimedia Commons.

The first is that this period witnessed the development of the criminal law being used to expand property rights. The customary entitlement to traditional rights (i.e. to corn left after harvesting, to firewood from the forest, bits of waste cloth retained by cottage textile workers) were gradually eroded. The eighteenth-century Black Acts outlawed the taking of game, and eventually restricted access to common lands used by many people for grazing animals. The battle between property rights and traditional entitlements engendered collective responses, including incendiarism and food riots, which provoked a collective response (usually military, using the local yeomanry).

The second is that, over the course of the nineteenth and twentieth centuries, society tended to follow a harm-reduction model, where crime should be prevented by paid police officers; and crimes where there are no identifiable victims are also prosecuted (i.e. many traffic offences, falsely claiming benefits, and so on). In the eighteenth century through to around the start of World War I, the victim was the critical actor in defining crime and taking action against a criminal. In the eighteenth century - as described in more detail in the Policing pages - victims of crime were aided by local parish officers, constables, and private prosecution agencies, or could pay an annual subscription to have a "detective" track down their stolen property, or prosecute them in court. Even after the creation of the Metropolitan and County Police forces victims still played a significant role in the apprehension and prosecution of criminals.

So, the numbers and types of crimes that were prosecuted relied on an active victim who was determined to take the cases to court. We have to remember that victims of crime had many options. They could come to terms with the perpetrator, and accept money in damages or compensation (a process known as compounding). Employers could sack workers who stole their workplace materials. Victims of assault could use physical retribution themselves; violent husbands could be subject to "Rough Music" (community sanctions) in their neighbourhood.

Some crimes were part-and-parcel of the times. The early-nineteenth-century body-snatchers or “Resurrection Men” who stole bodies for medical classes were a product of a shortage of available cadavers for the doctors to practice on. Their trade died out. So too, has child-stripping (the practice of stealing clothes from infants), which has also receded from common parlance. There were few crimes involving vehicles before the First World War, whilst now traffic offences take up a considerable amount of magistrates’ courts time.

The crimes that did not make it into court tell us as much as the crimes that did, but it is the latter which the evidence forces us to focus on. We can see what kinds of crimes people thought were worth prosecution, and who brought those cases to court. Unfortunately, this tends to skew our view of the type and amount of crimes that predominated. It was not until the mid-nineteenth century that the government published annual crime statistics. Although these were deeply flawed, it is possible to see how crime (or prosecution) trends were presented, and determine why the Victorian State and the general public reacted to apparent outbreaks of crime at particular times. 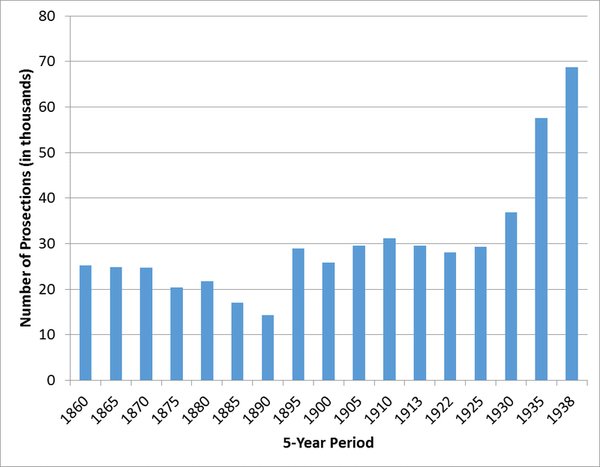 Total number of Prosecutions in England and Wales, 1856-1940. © Digital Panopticon.

The years between the 1880s and 1930 has been characterized as the era of the “Policeman State” by Vic Gatrell (1992). Over this time, the police slowly grew to exert a powerful influence over recorded crime through the centrality of their role in the detection and prosecution process. They effectively replaced the victim in court, taking the main role as both the apprehenders and prosecutors of criminality. This affected prosecutions for violence, especially, and they fell dramatically. For example, in England and Wales, assault prosecutions fell from about 75,000 in 1870 to just over 22,000 by 1930. The much-vaunted English miracle of reducing violent crime was, more likely, a function of the changes in the way offenders were brought to court.

If violent crime did appear to be falling, it did not prevent the public (or the newspapers) reporting on a number of crime-related panics in the mid- to late nineteenth century.

The nineteenth century sporadically experienced periods of heightened anxiety, particularly about violent crime. Following the end of convict transportation in the mid 1850s, Londoners felt their insecurities increase as convicts who would have completed their sentences on Australian soil (and then stay there) were released from British prisons. Concern grew that ex-prisoners would be free to reoffend on the streets of the capital. When some of these "ticket-of-leave" men were suspected of committing violent crimes in the 1860s, the popular press ensured that a relatively small increase in violent crime was widely reported. It grew into a - what we now would commonly term - "moral panic" about violent ex-offenders, epitomised in a high-profile incident of "garrotting" (the strangulation of mugging victims with a knotted rope).

The panic over "garrotting" was initially precipitated by an attack on a Member of Parliament, who was assaulted on his way from the House of Commons to his London club. The newspapers, some of which were becoming ever-more sensationalist in their approach to crime in an attempt to get more readers, gave this story a lot of coverage. The panics over violent crime continued in the 1860s, with the government bringing in legislation which tried to cope with the (really quite small and limited) outbreak of "muggings" in London; and the perceived problem of the criminal classes (which the 1869 and 1871 "Habitual Offender Acts" were meant to deal with). We have the records created by these Acts in the Digital Panopticon, but unfortunately, they could never hope to control what was a largely "imagined community".

The most well-known panic centred around the spate of murders in Whitechapel in 1888. There were many murders, some equally as gruesome as the Jack the Ripper murders, in East London at this time, but because these murders were unsolved they caught the public imagination, and suited contemporary political campaigns to oust an unpopular police commissioner and Home Secretary. As the coverage of garrotting and Jack the Ripper shows, our knowledge of crime in this period is mediated by the sources we have available to examine the subject. 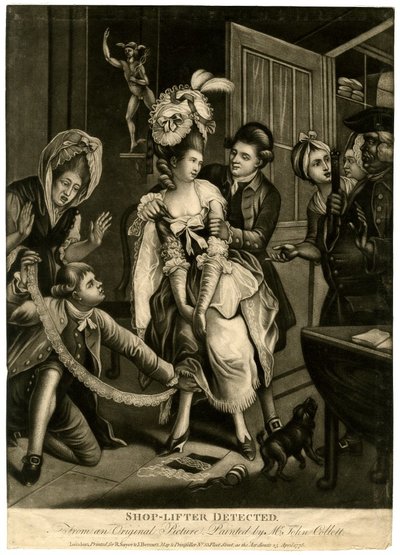 For the eighteenth century, we can learn something about more serious offending through reports of trials in broadsides and published trial reports, notably the Old Bailey Proceedings. Newspaper reports are quite limited until the mid-nineteenth century, at which point they start to report local crimes, and more minor offences. They do tend to be overlaid with more sensational (and political) reportage as the century progressed. This is not necessarily a problem since it tells us much about attitudes to crime, although they are less useful for examining the real incidence of crime.

The annually-published judicial statistics should do that, but they too have their problems. Although they do have a great deal of information, compiled in hundreds of statistical tables, the way the data was collected is not always known, and is often unreliable in any case. They were substantially revised in 1892, but are still problematic. Again they should be treated as a way of examining prosecution trends rather than crime trends.

In addition to the Old Bailey Proceedings this website also has records of minor crimes, in the Bridewell House of Correction Prisoners 1780-1795 and the Middlesex House of Detention Calendars, 1836-1889. Manuscript court records are available in archives, but they are difficult and time-consuming to transcribe and process. Gaining knowledge of crime in this period is therefore quite a tricky task, and we will only ever end up with a partial picture of the real incidence of offending in this period (as with any period).