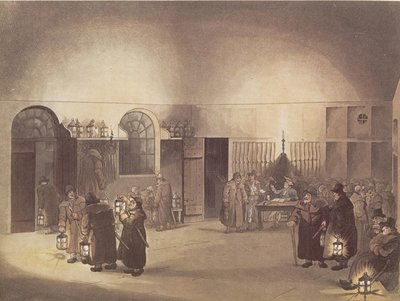 [Anonymous], "The Marylebone Watchhouse", from The Microcosm of London (1808). © London Lives.

The police played an important but evolving role in criminal justice throughout the eighteenth, nineteenth and twentieth centuries. Many trials at the Old Bailey were the result of actions taken by policing agents and involved them giving testimony and sometimes acting as the prosecutor. Systems of policing were under a process of continual reform, particularly in the nineteenth century.

Before the Metropolitan Police

In the eighteenth century, many victims of crime identified and apprehended the culprits before they contacted a formal policing agent to secure the arrest. While victims of crime continued to identify and prosecute offenders late into the nineteenth century, individual responsibility for law enforcement declined in this period. Instead, increasing numbers of men were paid to carry out these tasks. London was policed by a variety of parish constables, watchmen, patrols, and officers attached to magistrates’ courts. These different "policing agents" had separate, but often overlapping, jurisdictions and roles. 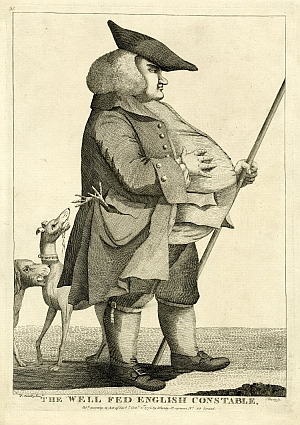 Parish constables were the main law enforcement body before the establishment of the Metropolitan Police in 1829, and many policing agents with different titles derived their powers from the office of constable. Traditionally, constables were chosen from among the householders of the parish, or ward (in the case of the City of London), and served the (unpaid) office for a year, alongside their regular employment. In practice, many of those who were called upon to serve paid substitutes to serve in their place. The majority of constables’ time was taken up with reacting to information given to them in the form of reports of crimes, or warrants issued by justices of the peace. They were obliged to execute all warrants for arrest and orders given through the courts, justices of the peace, sheriffs and coroners for their jurisdiction. In addition, they were expected to respond to allegations and reports of felonies committed, and arrest those who they witnessed committing felonies and misdemeanours. Most of their efforts were reactive.

Policing had long been focussed on the dangers of crime at night. The origins of the night watch lie in the 1285 Statute of Winchester, which stated that the inhabitants were to take turns in watching towns and cities at night. The night watch was an area of reform in the eighteenth century, with the formalisation of devoted watching forces in the metropolis, paid through funds raised from the inhabitants. Watchmen patrolled set beats and apprehended any offenders whom they encountered. Their primary policing role was to apprehend minor offenders, and to act as a deterrent against more serious offences. They also often called the hours, checked that lamps were working and that residents’ doors and gates were locked properly.

The parishes and wards of the metropolis also increasingly employed evening patrols in the late eighteenth and early nineteenth centuries. The watch generally operated from 9pm or 10pm until 5am, 6am or 7am (there was some variation between parishes and wards), and evening patrols were generally employed to patrol from dusk until the setting of the watch in the evening, and also sometimes in the morning, between the end of the night watch and day forces commencing duty. The watchmen and patrols were often monitored by the parish or ward constable and beadle. These ward- and parish-level policing systems displayed some characteristics of a modern police force: these men were paid to regularly patrol the streets according to set beats, and some wore uniforms. However, they were poorly paid and often of low status. They were not necessarily particularly well-respected at the Old Bailey, as there were concerns that these policing agents accepted bribes from those they were supposed to be policing, and were corrupt.

The City of London

The City of London had its own system of central policing, in addition to the constables, watchmen and patrols in the wards. The Upper and Under Marshal and their six marshalmen served warrants and pursued suspected thieves under the orders of the Lord Mayor, and were responsible for maintaining public order during processions, coordinating the ward and special constables. The City also began to employ City-wide patrolling forces from the late eighteenth century. These agents were expected to maintain order on the streets, and also monitor and assist the ward watchmen. 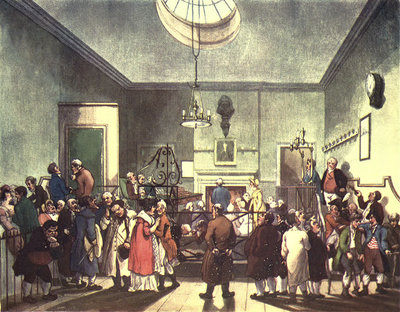 [Anonymous], "Bow-Street Office", from The Microcosm of London (1808). From Wikimedia Commons.

Outside the City of London, the Bow Street Magistrates’ Office in Covent Garden was a hive of policing activity. This was the most prominent magistrates’ office in the metropolis, where victims were encouraged to report crimes to a sitting magistrate. The Bow Street Officers (popularly known as "runners") were detective policing agents, and were employed to investigate crimes within and outside the metropolis. Many of these men acquired good reputations, and were well-respected in court.

Bow Street was also a centre for policing information, as clerks collected and recorded information about crime and suspected criminals. Patrolling forces were also sent out from Bow Street, especially in response to particular crises and fears of crime waves. Under the 1792 Middlesex Justices Act, seven additional offices along the lines of the Bow Street Office were established, and the officers attached to these courts also investigated and pursued criminals in the metropolis. In 1800, the Thames Police Office was established at Wapping, because of concerns about thefts from docks and shipping - the office employed one hundred constables to police the area around the docks and river.

These various different types of policing agents all appeared regularly in trials at the Old Bailey. Their testimony often formed a significant part of the criminal trial. As formal policing agents were increasingly involved in the criminal justice system, so their motivations were challenged. Many were accused in court by lawyers for the defence of being "thief-takers". This term refers to the mid-eighteenth-century figures who used their knowledge of the criminal underworld to profit from rewards for prosecution, and rewards offered by victims for stolen goods; often making false prosecutions for profit. They took advantage of parliamentary rewards awarded to prosecutors and witnesses on the conviction of offenders for certain offences, including burglary and highway robbery. These rewards were abolished in 1818. The motivation of seeking rewards meant that the testimony of policing agents was not necessarily always viewed as valuable and unbiased by judges and juries.

All these policing agents were eventually swept aside by the new Metropolitan (1829) and City (1839) Police forces. Robert Peel’s Metropolitan Police provided for a clear hierarchical structure and chain of command, from the Commissioners to Superintendents, Inspectors, Sergeants and Police Constables. The force consisted of 3,000 men in total, under the central control of the Home Secretary. While the Metropolitan Police constables did have many of the same roles and responsibilities as parish constables (and indeed were often the same men), the Metropolitan Police was established with a clear emphasis upon preventative, surveillance policing. Each new police constable was responsible for patrolling a particular beat, in a similar fashion to the former watchmen, working according to a shift pattern. It was expected that frequent patrolling would significantly reduce the opportunities to commit crimes. Police Constables wore uniforms, were armed only with wooden batons, and were expected to adhere to strict standards of conduct. 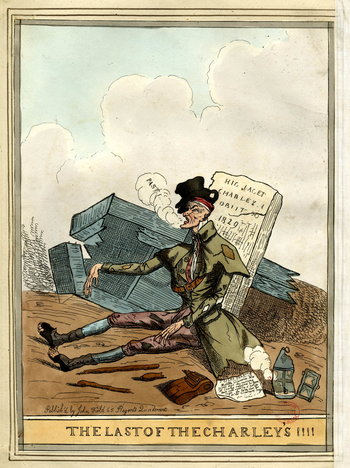 Public Attitudes towards the Metropolitan Police

The Metropolitan Police was initially unpopular among many residents of the metropolis. The new police rate was more costly than local watch rates had been to inhabitants, but the new policemen were still badly paid. It was difficult for the Commissioners to attract respectable men to the role, and there was a very high turnover in the early years of the police force. In some of the richest areas, such as St Marylebone, the establishment of the new police actually led to a decrease in the number of men patrolling the streets. However, gradually the new policemen were more accepted and respected by local residents, and indeed by judges and juries when they appeared at court. Metropolitan Police officers were identified formally in the Old Bailey Proceedings with their division and identification number.

In 1839, a second Metropolitan Police Act extended the jurisdiction and size of the force to 4,300 men, and a separate Act created a similar police organisation for the City of London. A high percentage of crimes brought before the Central Criminal Court continued to depend, however, upon victims reporting crime to the police, and upon victims and witnesses making positive identifications.

Following the establishment of the Metropolitan Police, police forces were established throughout the country along similar lines in the middle of the nineteenth century. The 1835 Municipal Corporations Act required Royal Boroughs to set up paid police forces, and the 1839 Rural Constabulary Act allowed county areas to establish police forces. Police forces became a requirement throughout England and Wales under the County and Borough Police Act in 1856.

The 1871 Prevention of Crimes Act gave the police powers to supervise and apprehend repeat offenders and those designated habitual criminals. Information on individuals who had been convicted of more than two offences was collected by the police to help with both surveillance and future identification of known offenders, and was recorded in the Metropolitan Police Register of Habitual Criminals. This legislation, in combination with the 1869 Habitual Criminals Act, allowed judges to order a set period of police supervision for repeat offenders up to seven years. On release from prison, offenders were required to report to the police every month, and inform them where they were living. If an offender under supervision committed an offence, was seen to associate with thieves or prostitutes, was found behaving suspiciously or could not demonstrate that they were making an honest living, they could be imprisoned for up to a year.

Surveillance of potentially vast numbers of habitual offenders placed a burden on policing provision. It became increasingly apparent that the level of surveillance was determined by the discretion of individual officers, and their personal knowledge of offenders; photography was used to aid the identification of offenders. This kind of police surveillance was not necessarily conducive to reform of the offenders, who often found it difficult to settle in one area or find reliable employment.

Much of the information for this page was taken from Clive Emsley, Tim Hitchcock and Robert Shoemaker, "Crime and Justice - Policing in London." Old Bailey Proceedings Online, version 7.0. https://www.oldbaileyonline.org, accessed 31 May 2017.

This page was written by Eleanor Bland, with additional contributions by other members of the Digital Panopticon project team.