A Guide to Researching Juvenile Offenders 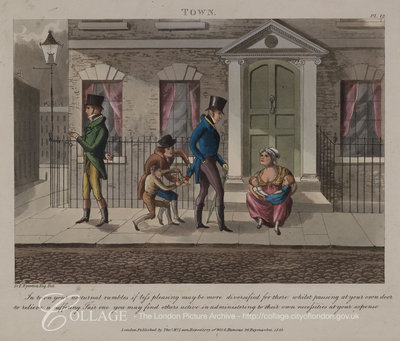 Interest in child criminals peaked in London during the eighteenth and nineteenth centuries; a period that spawned changes in legislative policies and legal approaches, and which altered the fates of young offenders. This page explains the background to a burgeoning preoccupation with juvenile crime in Britain at this time (and since). It outlines how children were punished, and explains how the topic can be researched using the resources provided on the Digital Panopticon website.

Evidence from the press and courts appears to sustain the view that juvenile crime was increasing in the early nineteenth century. Sensationalist reports of child criminals committing crimes of theft and violence in the streets and markets of inner-city London dominated the popular press and provided fodder for the broadsheets, periodicals and notorious "penny dreadfuls". Pocket-picking was a particular concern for the authorities, immortalised as the crime of choice for the Artful Dodger and his associates in Charles Dickens' Oliver Twist (1837). Social observer and journalist, Henry Mayhew described a "pocket-picker" (also known as "dippers" or "buzzers") in London Labour and the London Poor: "He was an orphan and was dismissed from the pottery where he worked ... He also said that 'Picking pockets ... is the daringest thing that a boy can do'". Small items including glasses, purses and handkerchiefs were the most common currency for young thieves, but sentences could be harsh. 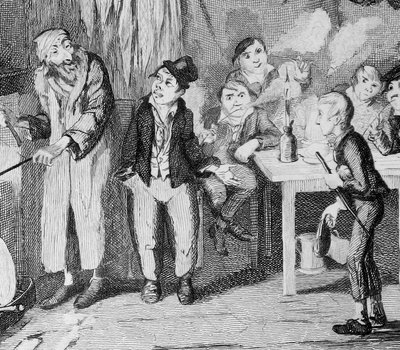 Historians have questioned the extent to which juvenile crime was actually on the increase during the nineteenth century. Crime statistics, available from Hansard, can only ever provide the tip of the iceberg of true crime rates given that most crimes did not reach prosecution. Popular narratives must be read "against the grain" and not taken at face value. Moral entrepreneurs inevitably exaggerated claims about the prevalence of juvenile delinquency and popular narratives were repackaged and sold in sensationalist novels to satisfy readers’ lurid appetites for true crime stories.

At the beginning of the nineteenth century, the predominant principle underpinning the treatment of young offenders essentially did not seek reform, but almost solely aimed for the deterrence of punishment. This included flogging, imprisonment, transportation to Australia, and even execution.

To modern eyes the treatment of juvenile criminals in the nineteenth century appears especially brutal. Children over the age of seven were regarded as criminally responsible, and until the Youthful Offenders Act of 1847, any child between seven and fourteen could face the same punishments as adult offenders including imprisonment, transportation and death.

Examination of the Digital Panopticon Life Archives, however, shows that very few children were executed, and the Old Bailey Proceedings suggests that many youths’ sentences were reduced to transportation on recommendation to mercy on account of their youth.

Juveniles who were executed can be explored by searching the Petitions for Pardon 1797-1858, Judges Reports on Criminals 1784-1827 and Capital Convictions at the Old Bailey 1760-1837 datasets.

Following America’s refusal to accept any more convicts following United States Independence in 1776, Australasia became the main site for transported convicts until its abolishment. Youths could be transported to the Australasian colonies for between seven, fourteen years or life. Many boys in Digital Panopticon records were imprisoned in the juvenile penal colony, Point Puer in Tasmania (then Van Diemen's Land). Upon arrival and throughout the duration of their sentence, boys were trained to be "good colonial citizens" and set to work on a manual trade such as carpentry alongside a rigid schedule of elementary and religious instruction. 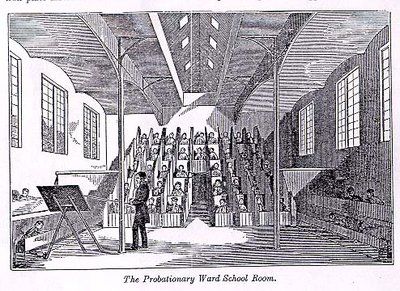 Prison and transportation were increasingly viewed as unsuitable for young offenders across the early part of the nineteenth century. In 1816, when London's total population was 2.5 million, 1,500 youths under the age of 17 were incarcerated in London prisons and some were as young as eight or nine years old. The Inspector of Prisons, Reverend W. Russell, reflected in 1846 that, "In the discharge of his official duties he had seen little children, scarcely the height of the table, who appeared before him as transported felons- who had been sentenced to the most severe punishment short of death, inflicted by our laws; and under such circumstances had had been powerfully impressed with the absurdity of our legislation with respect to juvenile felons" (The Times, 16 February, 1846: 3). Moral reformers had been urging the government to allocate separate penal provisions for young offenders since the early 1800s, however the reorganization of the penal system was considered by the state to be too expensive (Radzinowicz and Hood, 1990: 145-8). It was following the recommendations of the 1835 Select Committee on Gaols and Houses of Correction that the government finally agreed to the establishment of a separate prison for juveniles and Parkhurst, a former military hospital and children’s asylum on the Isle of White, was converted as a prison for male youths in 1838.

The 1840s and 50s marked the most significant shift in the ways that youths were prosecuted and punished (Shore, 2008: 163). Following the close of transportation, debate about how to imprison young offenders re-emerged and reform was seen as preferable to discipline (Shore, 2008: 88). Mary Carpenter was arguably the most influential voice on how to rehabilitate young offenders. From her observations in penal colonies Parkhurst and Mettray in France, Carpenter argued that reformatories were a preferable alternative to prisons and that children should receive shelter, refuge, education, and care. Change finally emerged under the 1854 Reformatory Schools Act which gave courts the power to sentence juvenile offenders under the age of 16 to attend reformatory schools between two and five years following an initial spell of fourteen days imprisonment. This legislation meant that there was little to separate the experiences of juvenile offenders sentenced to reformatories and poor ‘non-criminal’ children who were placed in orphanages and managed to avoid interactions with the criminal justice system. The complex web of reformatory institutions continued to co-exist for the latter part of the nineteenth century until the first borstal was established in Kent in 1902. Borstal regimes invoked a return to early Victorian values and prioritized military training and brutal discipline. Borstals were abolished in 1982, and were replaced by a network of young offenders detention centres that continue to exist today.

The establishments which incarcerated young offenders in the Victorian and Edwardian period formed a complex web of reformatory institutions which included penal colonies like Parkhurst and hulks including the Akbar, borstals, approved schools, and ragged and industrial schools that co-existed alongside each other for the most part of the nineteenth and early twentieth centuries. Records from these institutions are searchable (with some restrictions) in National Archives.

Locating the Lives of Juveniles

The Digital Panopticon website includes a wide range of resources for researching the history of juvenile offenders in eighteenth- and nineteenth-century London.

Many records that document juveniles’ interactions with the justice system are spread across various resources, so it can be a difficult and time-consuming task to trace the histories of young offenders.

The Digital Panopticon project has linked together disparate social and legal records to reconstruct the lives of London’s "real artful dodgers" and follow them from the city to the courtroom and finally to the Australian colonies. The Digital Panopticon traces London’s juvenile delinquents through courts, prisons and hulks, but also goes beyond their interactions with the criminal justice system to reveal their lives, families and neighbourhoods: where they lived, who they married and when they died.

The Digital Panopticon website allows users to search for individuals across multiple datasets and zoom in on particular documents that add detail to their life histories. The Old Bailey Proceedings 1740-1913, for example, acts as a useful lens for exploring the crimes of young offenders and even provide testimony from witnesses and occasionally the offenders themselves. You can see how healthy they were and whether this was affected by imprisonment and transportation, find out how much they weighed and how tall they were by looking at the VDL Founders and Survivors Convicts 1802-1853 dataset. It is also possible to examine their bank accounts and employment contracts through the Convict Savings Bank Books 1824-1868 and VDL Convict Labour Contracts 1848-1857.

How to Research Juvenile Offenders

The Digital Panopticon has traced many of the young offenders subject to imprisonment, transportation and death over the eighteenth and nineteenth centuries. The website can be used to locate London’s "real artful dodgers" or to explore juvenile crime in more detail. Users can look at the fate of child criminals who were sentenced at the Old Bailey like James McAllister (M’Allister), who was transported to Van Diemen's Land aged 14 for stealing 120 halfpence.

These individuals can be found using the Search Homepage, and using the introductory step-by-step guide provided below. By using the Search Builder on the Digital Panopticon it is possible to add more search criteria where life events can be specified. By selecting "Criminal Trial" it is possible to input additional search criteria allowing age to be the focus. It is then up to you if you wish to add any other criteria to narrow down your search, such as the date of the offence or the sentence type.

Once you have your search results it will be possible to explore individual life archives (such as James M’allister below) from their initial criminal trial, to their punishment, and often to their lives upon release including marriages, births, employment and deaths. 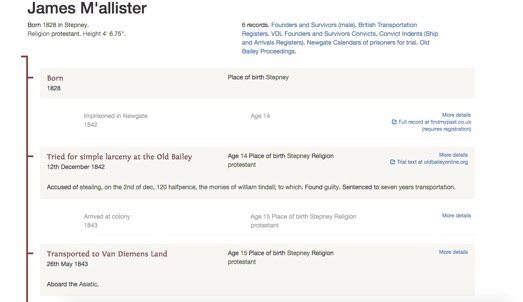 If you are particularly interested in juvenile offenders who were transported to the colonies it is also possible to search the transportation records by using the same method outlined above. This will allow you to research convicts transported as juveniles. Simply select the "+ Transportation" life event instead of "+ Criminal trial" in Step Two.

You can examine details of child convicts who were transported by exploring the Founders and Survivors database which contains information about 73,000 convicts transported to Van Diemen’s Land. This dataset includes information from multiple sources including Conduct Records CON31/1/14; Appropriation Lists CON27/1/4 and CS01/1/444; Description Lists CON18/1/15 and CON23/1/1; and Muster Rolls CS01/1/354 (the latter is often reference only). These records provide information on behaviour, height data, details of punishment, employment details and progress in the penal colony.

Juveniles were incarcerated in Newgate gaol alongside adults and serious offenders in the eighteenth and early nineteeth century. You can search for a particular juvenile offender in the Newgate Prison Calendar by name and age or search for all juvenile imprisoned by limiting the age search criteria.

If the juveniles you wish to study became adult offenders and entered prison in the nineteenth century, they will feature in the Prison Licences databases. There are currently separate datasets for men and women. These documents contain detailed information on offences (including those committed in their youth), punishments, demographic information, family life, occupations, literacy, behaviour in prison, and physical and mental health.

You can use the data "Visualization" tool on the Digital Panopticon to examine youth crime and punishment. You can either examine one dataset or explore multiple resources.

The visualization tool allows you to examine and measure broad factors that shaped youth crime, punishment and desistance. Using the tool, you can generate data visualisations that demonstrate patterns, for example, in age, familial background, occupation, criminal pathways and the impact of punishment outcomes.

Below are some questions that you can ask Digital Panopticon about juveniles sentenced to imprisonment and transportation during the eighteenth and nineteenth centuries by refining set criteria.

This page was written by Zoe Alker and Emma Watkins, with additional contributions by other members of the Digital Panopticon project team.