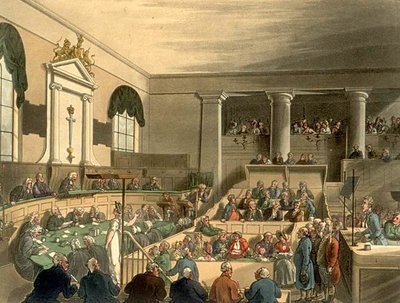 Thomas Rowlandson, "The Old Bailey", from The Microcosm of London (1808). © London Lives.

These pages provide overviews of critical historical developments, with a focus on London, along with more detailed descriptions of several key aspects of the broad history of justice and punishment between the late eighteenth and early twentieth centuries.

Eighteenth- and nineteenth-century London got the crime that it deserved. It was a city of unrivalled wealth, but also one of extreme poverty. The inducements to, and the opportunities for, crime in the metropolis were great. In an attempt to tackle the crime problem, major innovations were introduced in the policing, prosecution and punishment of crime in this period; establishing several cornerstones of the modern criminal justice system.

A general introduction to crime in London, 1780-1925, including General Crime Trends, Moral Panics and Sources of Crime Knowledge.

An overview of the criminal justice system in London, 1780-1925, including Criminal Justice Pathways, The Court System and Themes of Change over Time.

A general introduction to the types of punishments imposed on Old Bailey convicts, including Death, Execution with Additional Cruelty, Transportation, Imprisonment, Corporal Punishments and Other Punishments.

Trials at the Old Bailey, The Charge, The Role of the Grand Jury, The Trial, The Role of Lawyers, The Judges, Verdict and Sentence, Appeal and Review, Records in the Digital Panopticon.

At Summary Level and Petty Sessions, At Sessions of the Peace, At the Old Bailey, Sentencing Patterns, Records in the Digital Panopticon.

The Hulks as a Form of Punishment, The Hulks in the Nineteenth Century, Women and Children, Records in the Digital Panopticon.

Death Sentence Respited, Hanging, Burning at the Stake, Hung, Drawn and Quartered, Dissection and Hanging in Chains, The Rise and Fall of the Bloody Code, Execution Rates, Records in the Digital Panopticon.