A Guide to Researching Biometrics

It is rare for non-elite populations to be described in much detail before the twentieth century. However, when criminals offended, nineteenth-century penal bureaucracy was ahead of its time. Prison authorities swung into action, documenting much more than just crime and punishment. The Digital Panopticon contains records that include the heights, weights and age details of thousands of criminals. Together with health and life histories, these biometric measurements can be analysed to glean insights into past welfare. This is because human growth is very sensitive to its environment – to food, to health and sickness, to work effort – and ‘insults’ slow down child growth. This elongates the growth process, so puberty is delayed, and final adult heights might not be achieved till the mid- or even late-20s for boys (earlier for girls). Persistent disadvantage leaves its mark in shorter adult stature. How anthropometric historians use biometric data is discussed in the associated Biometrics Research Theme.

Individual height measures can be found in the following record series:

Prisoner Photograph Albums from Wandsworth House of Correction in Surrey

Very few records contain both height and weight, together with more detailed information on life course and individual health. The key resource in the Digital Panopticon for such a critical mass of health and biometrics is to found in the UK Licences for the Parole of Convicts

Searching for individuals can be done through the Digital Panopticon search page. The record sets listed above all potentially contain height data, some weight as well. Downloading data for groups of individuals is also done through the search page but fewer datasets will yield good results. The large, thoroughly digitised sources are:

UK Licences for the Parole of Convicts

N.B. The key to downloading a usable dataset is to ‘+ Add more search criteria’. 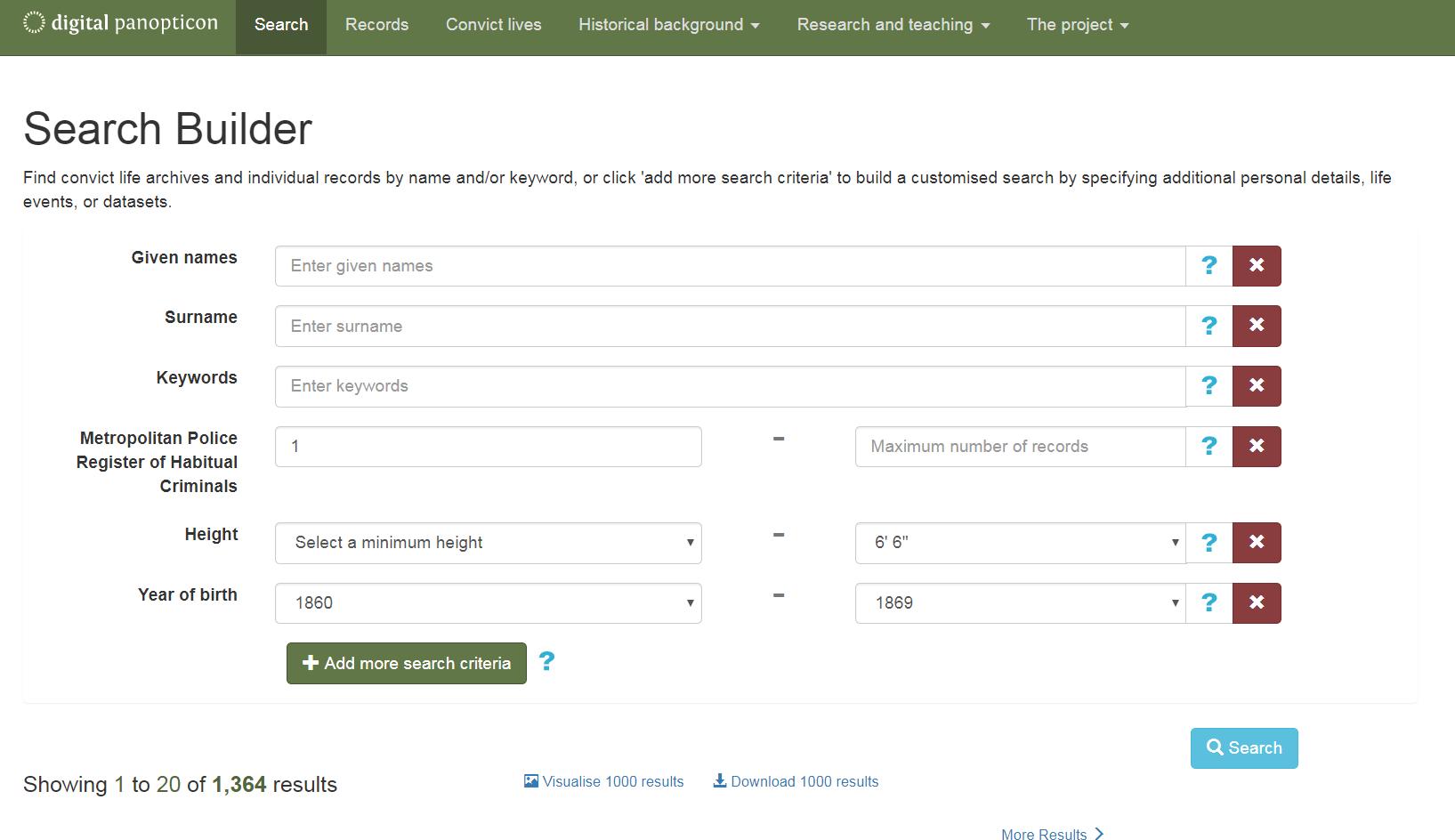 Step 2. Include Height. (You might want to know gender and age as well)

Step 3. Perhaps you are interested in particular years, e.g. those born in the 1860s: select Year of Birth

N.B. If you download these as TSV, you can open your dataset in Excel. Open Excel and navigate to your download folder, click on ‘All Files’ and Open. This will trigger the ‘Text Import Wizard’. Tell it: ‘My data has headers’. Leave it as Tab delimited. Finish at Step 3, as shown in the panels below: 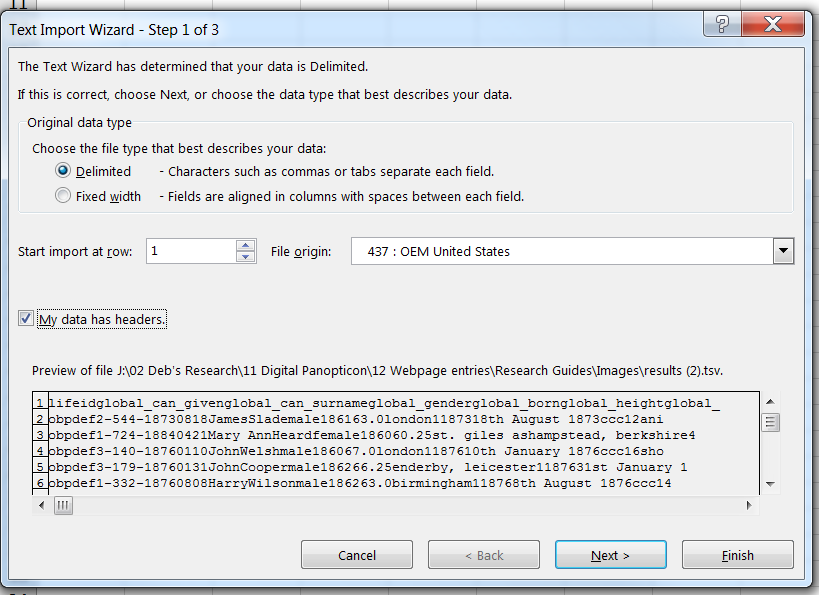 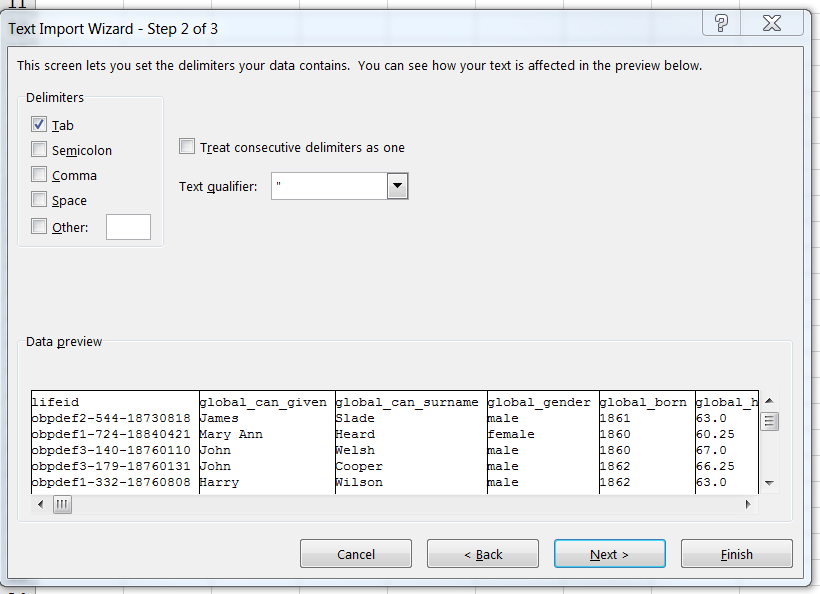 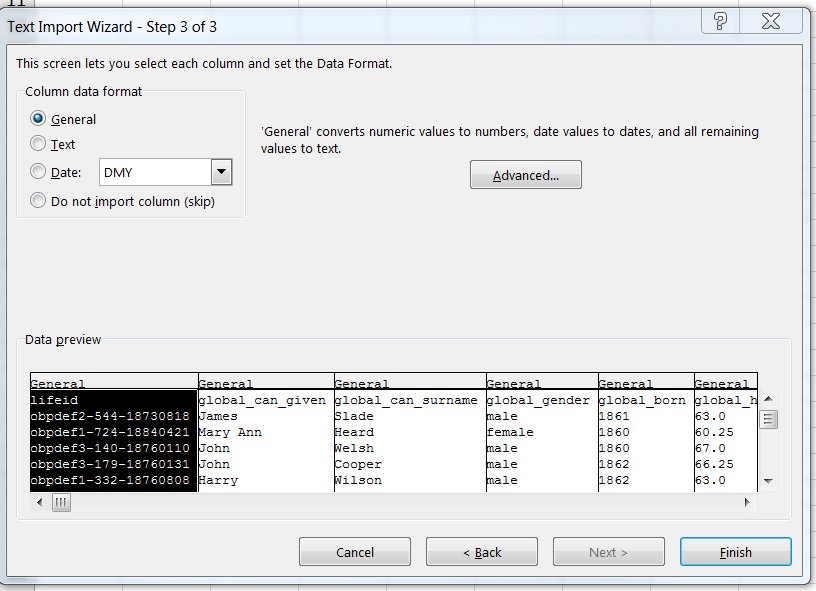 Hey Presto! You have a working dataset including height. 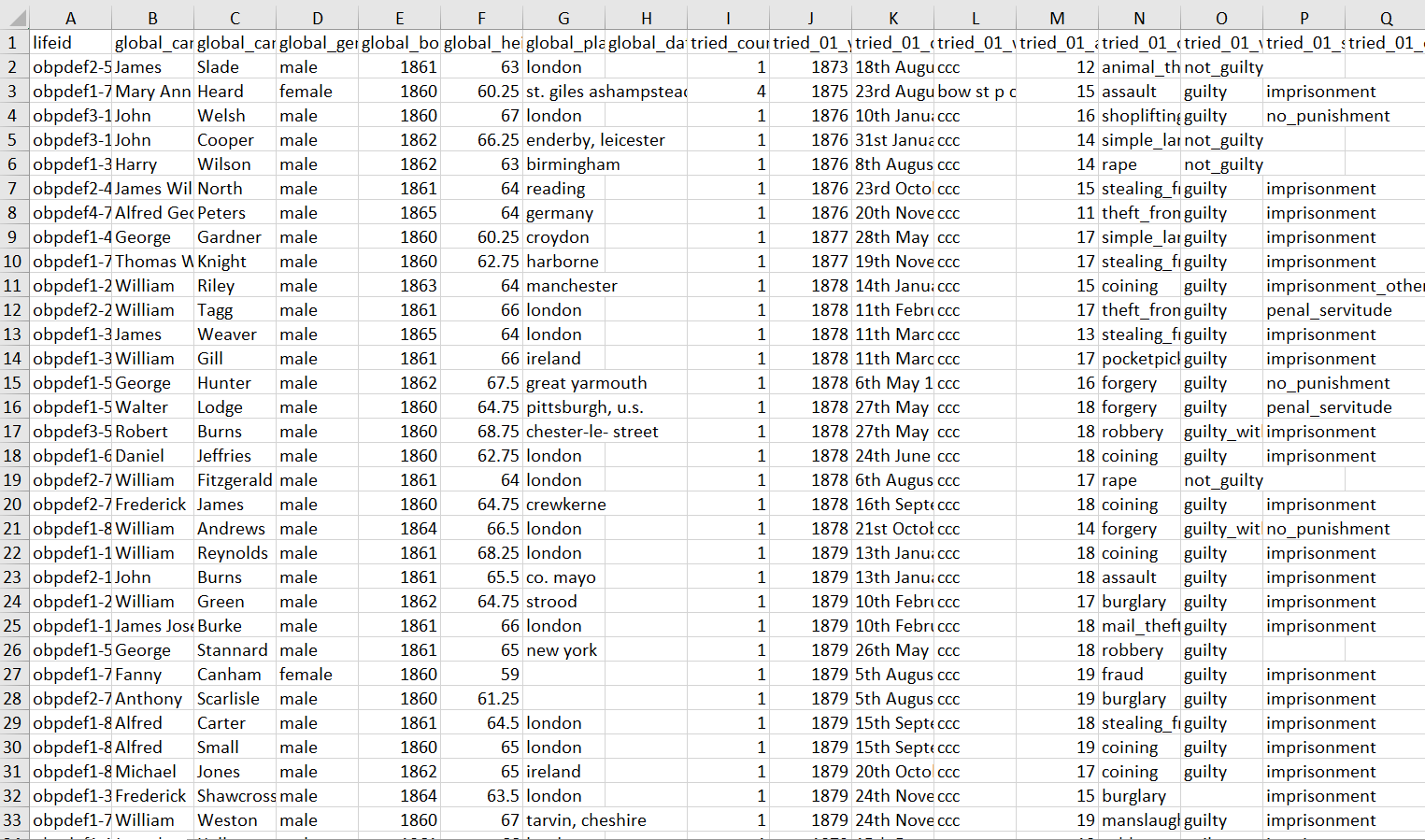 You are now set to explore your data...

What to Do with Data

There are different ways of employing biometric data. Heights are most useful when age is also known.

Individual stature: This implies the specific discovery of the height of an individual. It helps imagine the person. More than this, we can ask whether they were typical of the time, and how that compares with us today. Looking at children is most revealing of all, because growth slows down under more difficult circumstances, making poorer or poorly children shorter for their age. Below is a discussion of how to make these comparisons using (1) the table summarising the heights of male and female convicts and some other 19th century groups, (2) modern growth charts, and (3) Height-for-age z-scores (for the more statistically adventurous).

Group Stature: The same techniques can be employed when working with the average stature of a group. You will see examples below in the table of convict stature. For example, you might want to know the stature of teenagers in the past, estimate when they completed growth, and compare this with today. To do this, you would plot average height-by-age for boys and girls, and contrast this with modern growth patterns.

Trends: Time trends in stature are particularity useful for both population studies and also contextualising a life-course history. If heights go up, that implies better living standards. If they go down, the opposite. Because there is a lot of natural variation in height, more data are required to get reliable figures. A basic rule of thumb is at least 30 cases for each interval (a year, a decade). The bigger the dataset, the more fine grained and reliable the results. 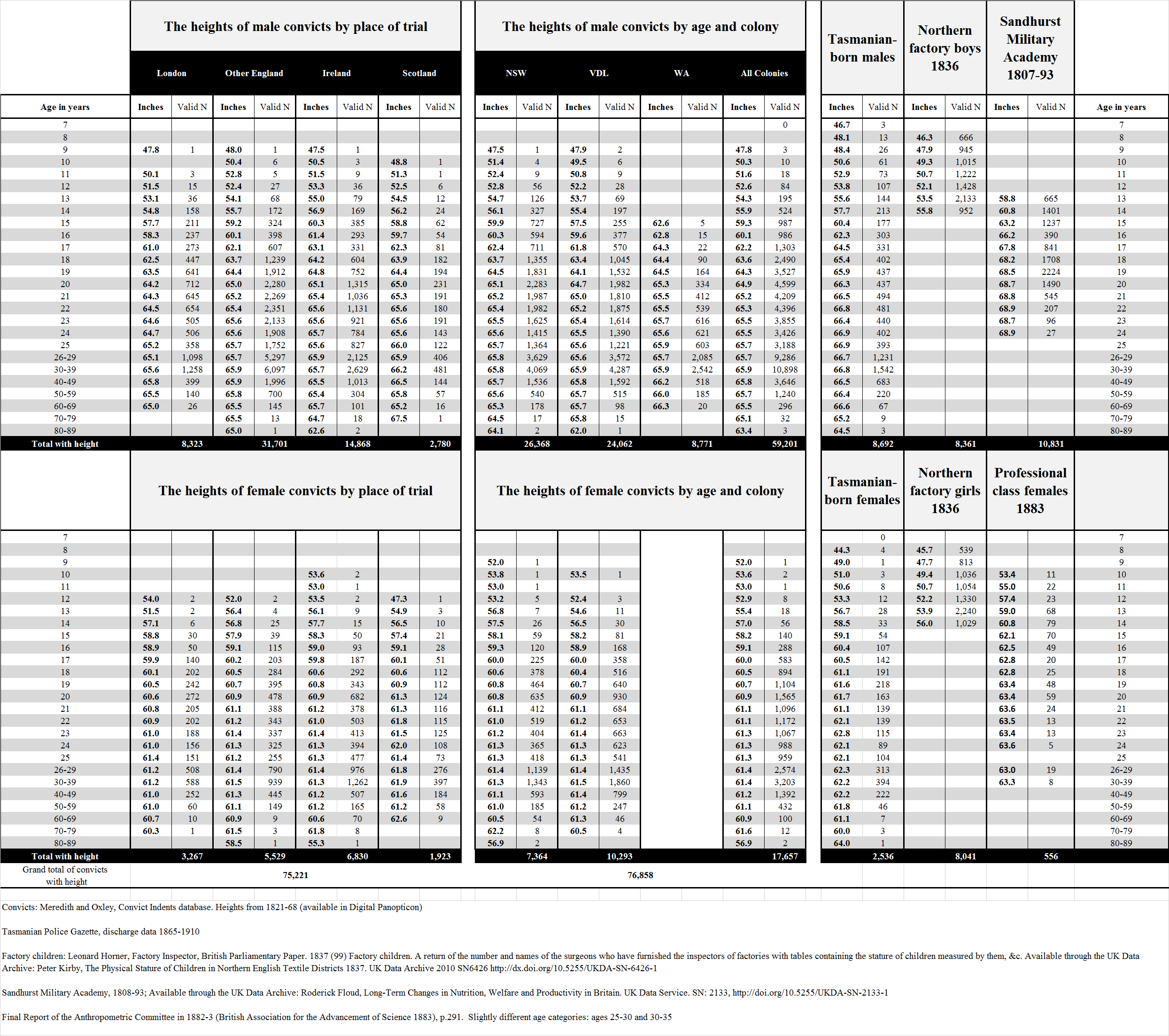 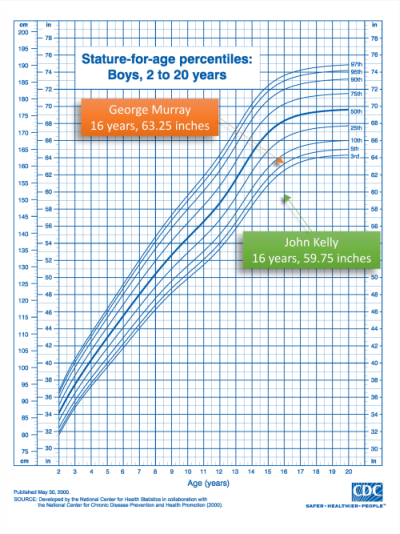 By the end of the 20th century, the average Englishman had gained 9 cm in height, 19 kg in weight, and doubled his life expectancy – a ‘techno-physio evolution’. But why did the riches of industrialisation and Empire not buy better health outcomes a century earlier?

In the 19th century there was great apprehension about ‘physical deterioration’ among the English working class, leading to fears that a weakened nation could no longer defend itself. Some contemporaries sought spurious eugenic explanations for decline, or blamed poor mothering.

Was leaving Britain the best option, either voluntarily or under sentence?

"The class of inhabitants that have been born in the colony affords a remarkable exception to the moral and physical character of their parents: they are generally tall in person, and slender in their limbs; of fair complexion, and small features. They are capable of undergoing more fatigue, and are less exhausted by labour than native Europeans …"

(British Parliamentary Paper [136] Report of the Commissioner of inquiry, on the state of agriculture and trade in the colony of New South Wales, p.81)

In 1914, G.H. Knibbs, Commonwealth Statistician, looked back on European Australia’s recent history and told a visiting Scientific assembly that

The evolution of the Australian people, therefore, may be regarded as that of the British people under changed climatic, social, and economic conditions … the whole evidence shewing that, if we except New Zealand, the position of Australia is unique with respect to its healthiness

(Federal Handbook on Australia, British Association for the Advancement of Science, 1914, p.582-3.)

Convict Indents and Police Gazettes can be used to examine this proposition. The techniques given below can be used for analysing and interpreting information on stature found in the Digital Panopticon record sets. 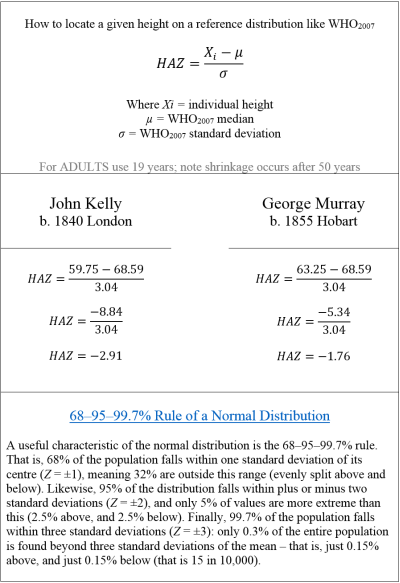 George Murray was born in Hobart Town in 1855. When he was arrested 16 years later for disturbing the peace, he had growth to an impressive 63.25 inches, spot-on-average for other Australian-born lads of this age appearing in the Tasmanian Police Gazettes. This was notably taller than boys of his father’s generation: the average 16-year old boy transported to VDL (Tasmania) was just 59.6 inches tall. John Kelly, for example, was just a little taller than this, at 59.75 inches. John was a labourer, literally transported for stealing a handkerchief, having done so once before, also with a conviction for vagrancy. Born and bred in Clerkenwell, London, it was there he received his sentence of ten years penal transportation. He arrived in Hobart, Tasmania in 1846 on the Lady Palmira.

George stood a good 3½ inches taller than John. As men, we would expect a smaller gap between them because shorter boys may well grow for longer and ‘catch-up’ on lost growth. There is clearly a sense that this is a large height disparity, constituting a rapid change in average stature between generations. But how big was it really?

Apart from mentally standing George and John side by side, another comparison can be made: with boys today. The figure above shows the boys in relation to the modern U.S. height-for-age standard (because the Centre for Disease Control and Prevention produce the most attractive growth charts!). George ranks on the 5th centile meaning that only five percent of today’s 16-year old American boys are this short or shorter. But John is an extreme outlier – somewhere (whereabouts?) below the first centile. In fact, John looks closer to the average U.S. 12¼ year old – his ‘biological age’. In these terms, George looks more than one year older than John, but both are short suggesting they suffered disadvantage.

Just how short does John appear to our modern eyes, and how big is that gap of 3½ inches? Instead of measuring inches, we can think in terms of how many people (what proportion of the distribution) lies between them. A precise way to measure this, for the statistically minded, is to use Height-for-Age Z-scores: HAZ. 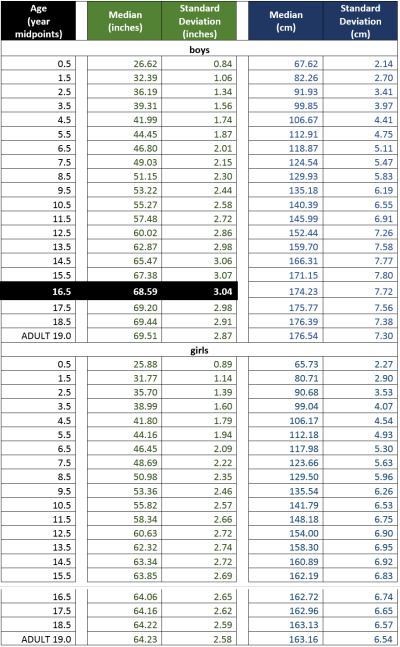 Height has a normal – or bell-shaped – distribution and can be summarised using a simple equation, given in the associated box (above left). From this, we can see just how significant that 3½ inch difference really was. Height-for-Age Z-scores (HAZ) provide a powerful tool for analyses and also illustrate where George and John fit into the bigger picture.

1. First, we take our values for median (µ) and standard deviation (σ) from an established height standard (e.g. https://www.cdc.gov/growthcharts/index.htm US CDC2000 or http://www.rcpch.ac.uk/growthcharts/ UK RCPCH) or ‘ideal’ height reference (e.g. World Health Organization http://www.who.int/growthref/en/ WHO2007). Each distribution needs to be specific to a given age-sex combination (e.g. the distribution for boys aged 16). We are not sure whether George and John had recently turned 16 years or were nearly 17, so we compare them with the midpoint reference from WHO2007, given on the right.

2. Then we apply the formula. This measures how far a value is from the centre in units of standard deviation: HAZ. The computations for George and John are given below, and the results are represented graphically.

Tasmanian George was short, but not stunted. At HAZ = –1.76, he was short-ish by modern standards, but not entirely out of the ordinary: just fewer than 1 in 20 healthy, well-nourished, boys are this size or shorter (which allows for natural variation). But something is definitely "up" when the probability of a figure occurring drops to 1 in 40. "Development" literature defines "stunted" as HAZ ≤ –2, a clear indication of moderate, ongoing malnutrition. Below this and the picture becomes even more severe. HAZ ≤ –3, for example, is indicative of severe chronic malnutrition - and is extremely rare in a normal population (only 1 in 770).

Clerkenwell John was therefore edging in the direction of chronic malnutrition, at HAZ = –2.91. He was very much stunted in today’s terms. He was not only in the bottom percentile of the modern standard, John was very low down within that bottom one percent. Among modern boys, only about 18 in 10,000 would be so diminutive. Remember, he was average among VDL convict boys of his own age (and very similar to those working in northern England’s textile factories). This powerful and persuasive data presents further evidence of the (poor) quality of life for working-class boys in 19th century Britain.

Of course, not all boys were working class. Disparity in height was a function of socio-economic inequality and uneven distribution of wealth and health. While the typical 16-year-old working class boy failed to reach even 60 inches, in the same era boys of the same age at the elite Sandhurst Military Academy grew to an average of 66.2 inches and were close to the modern standard (HAZ = –0.79). So were other children of the professional classes (HAZ = –0.77) recorded by the Anthropometric Committee of the British Association for the Study of Science (Final Report 1883). It was an era when the rich literally looked down upon the poor. 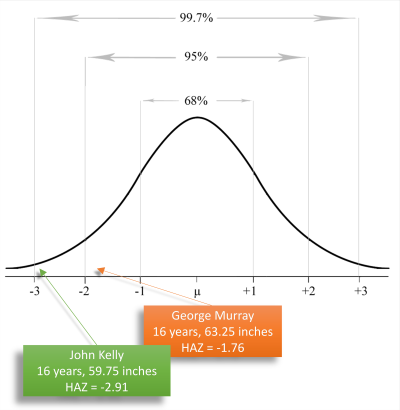 Convicts and prisoners offer a rare resource: body measurements of both males and females, at different ages, from different countries, at different times. With a little effort, their heights, weights and health records can give a very personal account of welfare in key centres of Britain’s empire: industrial England and Scotland, rural Ireland, and colonial Australia. These bodies tell secrets of what life was really like in the past.