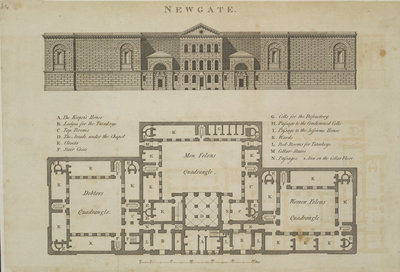 [Anonymous], A plan of Newgate prison (1800). From Wikimedia Commons.

The progression from pre-trial, to trial and then (for those convicted) to sentencing and punishment was all-too frequently interrupted by death until late in the nineteenth century when penal reforms improved conditions. From then, deaths in prison still occurred but it was no longer par for la course in English-styled prisons. Particularly in the early modern period (but also in high numbers at different times and different places throughout the nineteenth century), prisoners often died whilst awaiting trial, others died following their conviction and whilst serving out a period of imprisonment, or whilst being held in prison or on the hulks awaiting some other form of punishment.

The Investigation of Prison Deaths

Deaths among prisoners in jails and on the hulks were both subject to an automatic inquest by the local coroner. Until 1823, juries for prison inquests were made up of half prisoners and half local residents, the latter sometimes including workmen employed in the jail.

For the most part, the inquests into prison deaths were brief and routine, with an apparent lack of official interest in determining why prisoners died. In 1837, Dr William Farr, the statistician responsible for compiling figures on the number of deaths in England’s prisons, even complained that "the inquest in gaols is at present very much a matter of form" (Sim and Ward, p. 247). The frequently-vague conclusions drawn by inquests might even have been an effort to conceal the actual causes of death and thereby protect prison authorities from disrepute. Prison authorities were sometimes criticised in the coroner’s court, but for the most part the inquests failed to hold the prison system to account for the deaths of inmates.

The total number of inmates who died in prison or on the hulks in England between 1780 and 1925 — and how prison death rates changed over that period — isn’t currently known. However, studies of short periods and particular prisons indicate that the numbers could often be very high, with prison death rates much higher than amongst the general population. Outbreaks of typhus — known as "gaol fever" — were especially devastating.

Between 1788 and 1827 the coroner for the City of London and Southwark investigated at least 1,116 prison deaths in the jurisdiction; an average of 28 per year. This included appallingly high levels of deaths in Newgate prison in particular in the later 1780s, following intense overcrowding and an outbreak of gaol fever. A total of 92 inmates died in Newgate in 1789 alone, out of a total prison population of about 600 people. 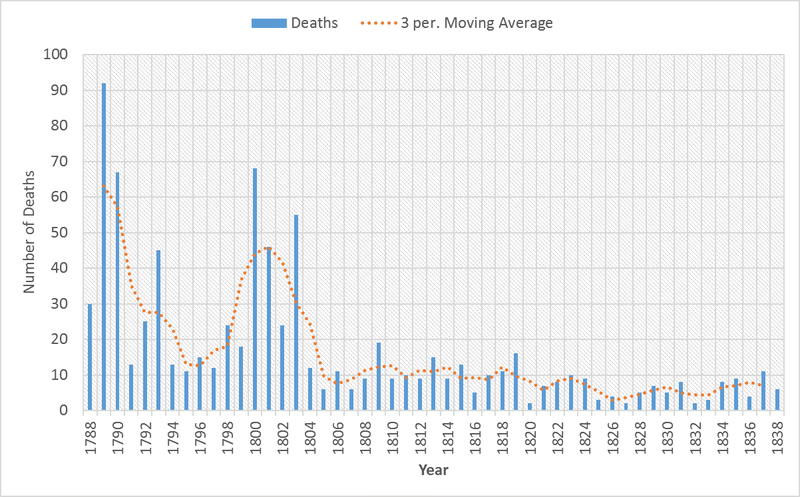 The prison hulks were no better. Of the 632 prisoners who were put on board the Justitia hulk from its introduction in August 1776 until 26 March 1778, 167 died. Conditions improved to some extent thereafter, but mortality rates remained high. On the three hulks moored at Portsmouth, there were 141 deaths in the years 1804-1811, out of an average yearly total of 945 convicts on board. This equated to an average annual death rate of 19.1 per 1,000 convicts, compared to a rate of 10 deaths per 1,000 people amongst the population of England at large (Forbes 1978, p. 366). In short, imprisonment more than doubled an individual’s chance of dying compared to life outside the prison walls. The rate of prison deaths is particularly high when we consider that that the prison population was relatively youthful.

Prison deaths included inmates at various stages of the judicial process and sentenced to a range of punishments, not just imprisonment. Out of 816 deaths in Newgate between the years 1788 and 1837, some 87 inmates (about 10 per cent) were awaiting trial, against 460 who had already been tried and convicted. Of the 428 inmates who died following their trial and conviction at the Old Bailey, 64 (15 per cent) had been sentenced to death, 105 (25 per cent) to imprisonment and the majority, some 252 inmates (59 per cent), to transportation. Death in prison was therefore by no means limited to those sentenced to imprisonment.

The cause of an inmate’s death was often not stated in the coroner’s inquest, or was recorded simply as "natural" or "by the visitation of God": an explanation that could scarcely be questioned and which helped to absolve the prison authorities from any suspicion of neglect or mistreatment (Forbes 1978, p. 364). When causes of death are mentioned, they typically relate to illnesses, old age and (in the case of the hulks, less so prisons) to accidents. Prisoners were often given limited rations and were susceptible to diseases brought into the prison, especially in the unsanitary conditions that were typical of the unreformed prisons of the later eighteenth and early nineteenth centuries. Deaths on the hulks could be caused by accidents when carrying out dangerous work onshore, or by the overcrowding in the confined spaces below decks which convicts were detained in. 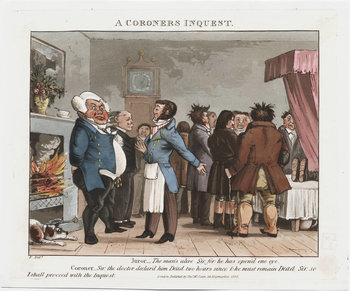 Through the Coroner's Inquests into Dead Prisoners 1760-1799 and Dead Prisoner Index 1800-1869 records included on this website, information can be found on all of the coroners' inquests conducted into prison deaths in the City of London and the borough of Southwark between 1788 and 1869 (with a gap for the years 1838-1860). The Coroner's Inquests into Dead Prisoners 1760-1799 records include links to the London Lives website, which provides access to almost all of the surviving coroners' inquests from eighteenth-century London, including those on deaths in prison.

Deaths in Millbank Penitentiary can be identified using the Millbank Prison Register 1816-1826 records. The England and Wales Criminal Registers 1791-1802 also contain notices of deaths in Newgate prison. And by linking these sources to other Records included on this site, it is possible to discover more about the personal details and circumstances of those who died in custody — including their age, offences, sentences and whether or not this was their first experience of incarceration.