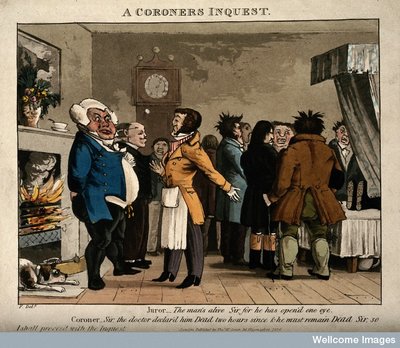 The "Coroner's Inquests into Dead Prisoners 1760-1799" and "Dead Prisoner Index 1800-1869" records included on this site contain information on those individuals who died in London’s prisons and were consequently the subject of a coroner’s inquest in the eighteenth and nineteenth centuries.

Coroners were legally compelled to conduct an investigation into every death in prison or on the hulks in England and Wales in this period. Inquests produced a range of documents, usually bundled together and typically consisting of the formal inquest document itself, the coroner’s warrant, the jury list and (less commonly) depositions.

The parchment inquest document contained a brief statement of the jury’s verdict: in most cases the verdict was “natural” or “by the visitation of God”, but in other instances the jury could return a verdict of "felo de se" (suicide), accidental death, manslaughter or murder. The documents are typically formulaic and rarely contain more than brief details about the death or the personal details of deceased (beyond their name).

Where they have survived, depositions typically include more information, and were seemingly taken down rapidly as the words were spoken by the witnesses. Such depositions can include details of how long the deceased had been in prison and the circumstances of their death.

The records contain only brief details, including the name of the deceased prisoner, the date of the inquest and the London Lives reference number for the document.

The "Dead Prisoner Index 1800-1869" records, meanwhile, provide details of the 556 prison death inquests that are listed in the indexes to the City of London and Southwark Coroners’ Inquests held at the London Metropolitan Archives, covering the years 1800–1869 (with a gap for the years 1838–1860).

These records give the name of the deceased prisoner, the date of the inquest, the name of the prison (where known), and the reference number for the original inquest documents at the London Metropolitan Archives.

Those prisoners who died in Newgate and were the subject of a coroner’s inquest can be found in the England and Wales Criminal Registers 1791-1892 and the Newgate Calendars of Prisoners 1782-1931.

Many of those who died in London’s prisons were in custody following a trial at the Old Bailey. Such individuals will be found in the Old Bailey Proceedings 1740-1913.

Those who died in the City of London house of correction following a summary conviction might be found in the Bridewell House of Correction Prisoners 1740-1795.

A number were in prison under sentence of death, and might be found in the records of Capital Convictions at the Old Bailey 1760-1837.

Others died whilst under imprisonment or awaiting transportation as a condition of their pardon from the death penalty. In these instances, the convicts might appear in the Judges Reports on Criminals 1784-1827, Petitions for Pardon 1797-1858 or Home Office Criminal Entry Books 1782-1876. 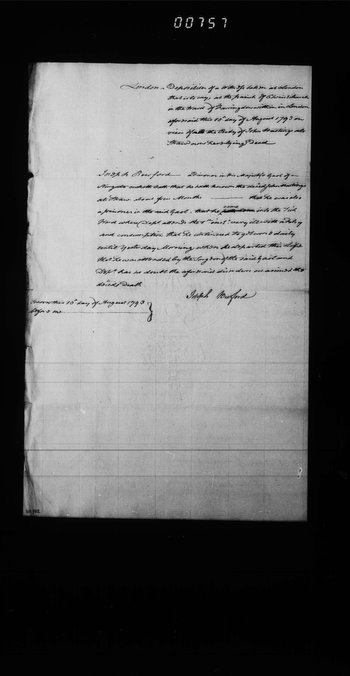 Deposition given at the coroner's inquest on John Hastings, a dead prisoner in Newgate (1793). London Lives, LMCLIC650060627. © London Metropolitan Archives.

The records provided on this site provide an extensive — although not complete — list of the coroners’ inquests into prison deaths in London between 1760 and 1869. Each record gives at least a brief note of the name of the deceased prisoner, the date of the inquest and the name of the prison (where known). In many instances, the records provide no more information than that.

The amount of information provided is therefore limited, and users wanting to know more should follow the links through from the "Coroner's Inquests into Dead Prisoners 1760-1799" records to the London Lives website for images and full transcripts of the original documents up to 1800, and by consulting the originals that are held at the London Metropolitan Archives in later cases.

However, despite the brief details, the records can be extremely useful in identifying why some individuals who were sentenced to death or transportation at the Old Bailey weren’t ultimately executed or sent overseas. In many instances the records are the only source available on this website for identifying whether an offender died after their Old Bailey trial or not.

And by linking the "Coroner's Inquests into Dead Prisoners 1760-1799" and "Dead Prisoner Index 1800-1869" records to the other records included on this site, it is possible to find out more about the social profile of those who died in prison, including their ages, backgrounds, crimes and sentences. In this way, the Digital Panopticon can shed light on aspects of the social history of the prison that would otherwise be missed.

Images and transcripts of the almost all the surviving coroners’ inquests from eighteenth-century London are available from London Lives. Those transcripts have formed the basis of the "Coroner's Inquests into Dead Prisoners 1760-1799" records. The transcripts were manually searched and tagged to identify all of the individuals who were the subject of a prison death inquest.