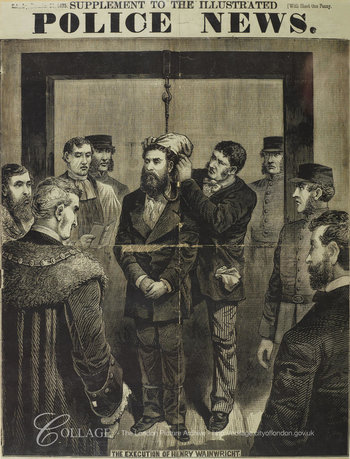 The "Home Office Criminal Entry Books 1782-1876" records contain details relating to the 272,940 accused offenders who were mentioned in the entry books of Home Office out-letters, warrants and pardons that were kept on criminal matters in the years 1782-1876. The entry books can be useful in determining whether an offender had their original sentence changed to some other form of punishment, or were pardoned without condition. These records now form the record series HO 13 held at The National Archives.

Entry books of State Papers relating to domestic affairs had long been kept by the Secretaries of State in England and Wales (and are now held at The National Archives in record series SP 44). These included criminal papers along with those on many other internal matters including education, charities and the Church. However, with the establishment of the Home Office in March 1782, a separate entry book specifically in relation to criminal matters started to be kept.

These newly-established criminal entry books included copies of out-letters from the Home Office to various legal officials on criminal matters; warrants for the transfer of convicts from one prison to another, or to the army or navy; and pardons or reprieves for offenders from their original sentences. It should be noted that warrants for death sentences to be carried out are not included within the entry books, and that the whereabouts of such records is unknown.

Although out-letters continued to be copied into the entry books until 1871, warrants and pardons stopped being entered in 1849. Warrants for the years after 1850 are held at The National Archives in record classes HO 15 and HO 147, but note that those series have not been digitised and are not included on this site.

The correspondence, warrants and pardons that were written by the Home Office and subsequently copied into the criminal entry books were usually compiled following the trial, conviction and sentencing of offenders, often as part of the pardoning process. The records includes details of convicts from across England and Wales, not just the Old Bailey.

Because many of the documents were also compiled as part of the pardoning process, the offenders might also frequently be found in the Judges Reports on Criminals 1784-1827 and the Petitions for Pardon 1797-1858. In this instance, the "Home Office Criminal Entry Books 1782-1876" records can be used to confirm whether the judge’s recommendations in relation to specific offenders were actually put into effect by the Home Office. 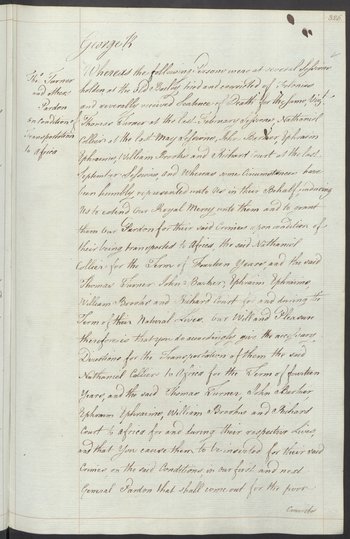 The records of "Home Office Criminal Entry Books 1782-1876" included on this site provide brief details of every accused offender mentioned in the entry books between 1782 and 1871. Each record typically gives the name of the offender, the offence they were charged of, where they were tried, and what punishment they were sentenced to.

The records given here do not provide a full transcript of the (often lengthy) original documents, which give a wealth of additional information such as the Home Office’s judgment and the condition(s) which were attached to pardons. However, through the links provided, users can (via a Find My Past subscription) view images of the original criminal entry books to see the full details of the records.

The records of "Home Office Criminal Entry Books 1782-1876" included on this site therefore offer a potentially useful source of information for finding out details about the penal journeys of convicts (which, as described, could be enhanced by further research in the original document).

Yet it should be noted that the warrants, pardons and reprieves can often be frustratingly brief, with little explanation of why the Home Office had come to such decisions. For instance, the documents often do not state the reason why a particular convict had been granted a pardon. The documents also typically fail to include any detailed information on the offender beyond their name and the date of their trial. It can therefore be difficult to confirm/disprove possible links to these records.

The original Home Office Criminal Entry Books for the years 1782-1871 can be found at The National Archives, Kew (London), under catalogue Reference HO 13.

A database of summaries of the all the accused offenders mentioned in HO 13, along with images of the original documents, is available from Find My Past.