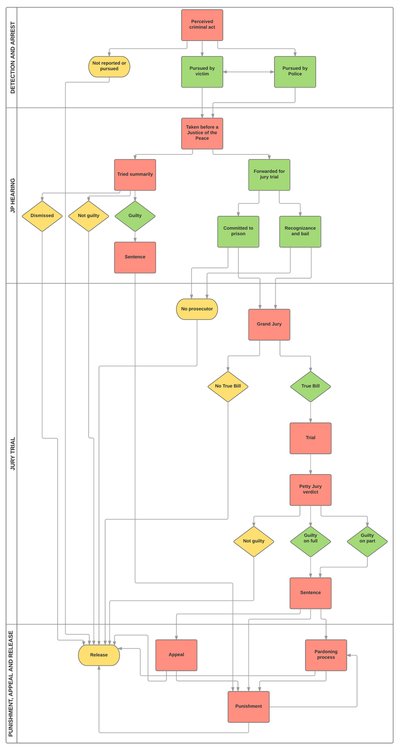 This page provides a short introduction to some of the main aspects of criminal justice in London in the “long” nineteenth century (c.1780-1925). It presents an overview of the changes that took place in this period, more details of which can be found in the other Historical Background pages.

Those accused of a crime in eighteenth- and nineteenth-century London entered into a system that has been likened to a corridor of connected rooms. At each stage, decisions were made that might remove the accused from the system entirely, or propel that person further along the process, in a number of possible directions. The commission of a criminal act and its prosecution could therefore follow a number of different pathways, as sketched out in the diagram (click here for a larger version).

The process began with the perceived commission of a crime. In many cases the accused was caught in the alleged act, either by the victim or by a witness, watchman, or police officer, and in cases of felony it was legally required that such parties try to apprehend the individual — by raising a "hue and cry", if need be. In other instances, the crime might not be noticed until some time after the fact, and in this case victims, judicial officers and a whole host of others can be found carrying out investigations to identify and apprehend the accused.

With a few exceptions — namely, forgery cases pursued by the Bank of England, rare instances of treason prosecuted by the Crown, and a not-insignificant number of police prosecutions at magistrates’ courts — the criminal justice system of the long nineteenth century was fundamentally victim-led, with the responsibility and costs of prosecution resting with the victim. As such, in the event of a perceived crime, victims were the primary actors in determining what came next. They could simply not report the offence at all, or if they did go to the trouble of detecting and apprehending the accused, they could either take the culprit before a justice of the peace (JP), or agree not to prosecute the individual in exchange for some form of recompense.

At this point, depending upon the nature of the offence and the discretion of the parties involved, the accused might be tried "summarily" (i.e. without a jury) before the JP, or forwarded on for indictment and jury trial, either at a sessions of the peace, or at the Old Bailey.

Aside from a small number of cases in which the prosecutor did not appear, it was then for the grand jury to decide whether the prosecutor’s case had sufficient grounds for it to proceed to a full trial before a petty jury, whose verdicts could have a substantial impact not only in determining whether the accused was found guilty, but also in shaping the penal options available to the judges in sentencing the convict.

The criminal courts of eighteenth- and nineteenth-century London consisted of a series of separate courts spread across multiple levels, often with overlapping jurisdictions. As such, criminal accusations could be dealt with in a number of different ways, as shown in the diagram below (click here for a larger version). 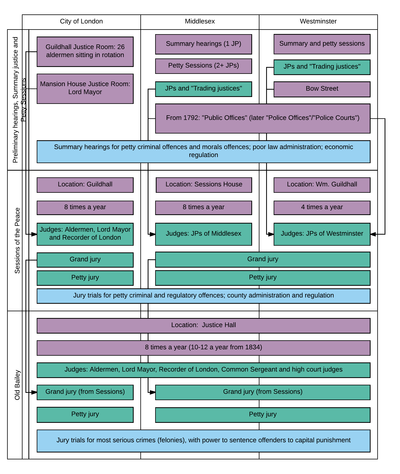 At the most informal end of the spectrum, justices of the peace conducted summary hearings and "petty sessions". Many minor offences could be adjudicated by a single justice, or pair of justices, acting under summary jurisdiction; the scope of which increased substantially in the eighteenth and nineteenth centuries. Those convicted under summary justice might be punished with a fine, whipping or commitment to a house of correction.

Sessions of the Peace

The vast majority of felonies (the most serious offences, those which at least at some point were or had been punishable by death), and some serious misdemeanours, were tried at the higher court of the Old Bailey, under commissions of gaol delivery. The Old Bailey sessions met eight times a year until 1834, when the Central Criminal Court Act of that year changed the name of the court, enlarged its jurisdiction and increased the number of sessions to between ten and twelve each year.

At the highest level - amongst the courts of Westminster - the King’s/Queen's Bench (crown side) heard a relatively small number of “serious misdemeanour” cases that were brought upon criminal information, without an indictment having previously been sought. It also acted as a court of review for summary convictions and cases indicted at the sessions of the peace or the Old Bailey.

The Digital Panopticon website includes many of the records for the most commonly-used courts listed above. Criminal accusations could also, however, be prosecuted in several other courts, and whilst readers may find occasional references to them, no records from such courts have been included in this website. Church Courts dealt with religious and morals offences, but the scope and scale of their business declined in the eighteenth century. Petty property disputes were occasionally adjudicated at the London Mayor’s Court and the Sheriff’s Court. Other courts dealt with particular jurisdictions: the High Court of Admiralty, for example, held sessions at the Old Bailey to try offences committed at sea, and military courts martial dealt with many common law offences committed by servicemen, in addition to acts of insubordination, desertion and the like.

In short, the range of courts which might be involved in criminal accusations in eighteenth- and nineteenth-century London was extremely broad, and the boundaries between them often ill-defined. By bringing together the records of many of these courts, the Digital Panopticon website makes it possible to trace individuals as they moved in and out of this judicial strata.

Themes of Change over Time

The period from the later eighteenth to the early twentieth century witnessed significant changes in the criminal justice system. Whilst the general structure of the courts remained largely the same — as it did until the Courts Act in 1971 — many other aspects of the criminal justice system were transformed. Some of these changes were the result of new legislation, but in many other instances developments had long been in motion before being enshrined in law.

A number of prevalent themes can be identified in the developments to the pre-trial process and the criminal trial that took place in this period, more detail of which can be found in the individual pages on Crime, Justice and Punishment.

In the first instance, the years c.1780–1925 saw the expansion of summary justice in the metropolis. Through new legislation, notably the Criminal Justice Act of 1855 (18 & 19 Vict, c.126), summary jurisdiction was extended to cover what had formerly been indictable criminal offences. As such, by the late nineteenth century, the summary courts were dealing with twenty times as many cases as the jury courts. This included an increasing use of pre-trial hearings - a kind of pseudo-trial in which magistrates evaluated the evidence in cases that strictly speaking should have been forwarded to the jury courts without review.

Removal of the Victim

Secondly, many of the changes to criminal justice in this period effectively removed (or at least reduced the role) of the victim in bringing offenders to justice. Developments to policing in many ways transferred the responsibility for detecting and apprehending offenders from the victim to the police. In the later nineteenth century, the Director for Public Prosecutions began to take a more direct role, thus largely side-lining the victim in the decision to prosecute. And in the trials, and in summary and other courts, lawyers were increasingly employed by victims to take on the work of conducting prosecutions.

Centralisation was likewise a prominent theme of the changes to criminal justice. From the 1750s onwards, the central state started to give victims financial support towards the (often substantial) costs of bringing prosecutions, and with the Poor Prisoner’s Defence Act of 1903 this extended to granting some poor defendants legal aid. At the same time, the Home Office and Parliament undertook increasingly greater control over the police and judicial oversight of the activities of justices acting under summary jurisdiction. It was a period too that witnessed the substantial development of parliamentary investigations into criminal justice and a boom in criminal law-making.

Bureaucratisation too is evident in many of the changes. The growing use of solicitors and barristers fundamentally changed the nature of the criminal trial; encouraging a move towards more precise legal definitions, a standardisation of judicial procedures and more rigorous standards of evidence. The institutional demands of professional policing, transportation to Australia and the rise of mass imprisonment, along with a widely-diffused desire to "know" and "understand" the criminal, also led to a revolution in criminal record-keeping in this period — a development that makes the Digital Panopticon possible. From the later eighteenth century onwards, far more information about the accused and about trials, verdicts and punishments was collected than ever before.

The significance of these changes should not, however, be overestimated. Many aspects of criminal justice remained the same, and in some instances, developments ran in a different (even opposite) direction to the overarching themes identified above. For instance:

Through calendars of prisoners, criminal registers and the Old Bailey Proceedings, - amongst many other sources - the records included in this website allow many of the changes summarised here to be investigated in detail and the evolution of modern criminal justice to be uncovered.