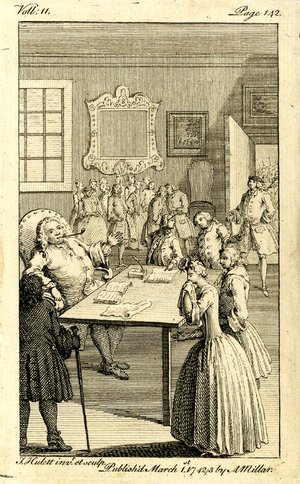 In eighteenth- and nineteenth-century London, the sentencing of convicts could take place in a number of settings: by magistrates and justices of the peace acting alone (at summary level), in pairs (at "petty sessions") or in groups (at sessions of the peace), as well as by judges presiding over trials at the Old Bailey.

Sentencing at the Old Bailey

Although the sentencing options in some instances were dictated by statute or by the verdict passed by the jury, nevertheless magistrates, justices of the peace and judges often had a range of punishments to choose from and could exercise significant discretion. Their choices were often influenced by such factors as the individual circumstances of the criminal, the nature of the crime and the perceived state of criminality at the time. The sentences passed on convicts were not invariably carried out, however, due to the widespread use of the pardoning process and other procedures that determined the penal outcomes that convicts ultimately suffered.

In stark contrast to summary level, petty sessions and the sessions of the peace, sentencing at the higher courts of the Old Bailey and assizes was surrounded with ritual in an attempt to display the majesty of the law. At a "maiden assizes" (a sessions that failed to result in a single death sentence being passed), for instance, the judge was presented with a pair of white gloves. When a death sentence had to be passed, meanwhile, the presiding judge would put on a black cap, acting out an orchestrated piece of theatre that served as the "climactic emotional point of the criminal law", famously described by Martin Madan in a pamphlet of 1785: “The dreadful sentence is now pronounced — every heart shakes with terror — the almost fainting criminals are taken from the bar — the crowd retires — each... carried the mournful story to his friends and neighbours.” 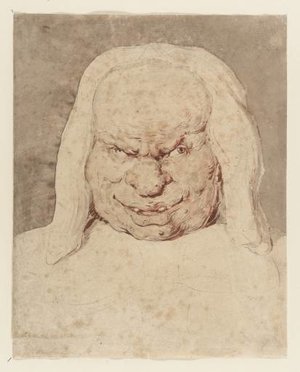 Yet this ideal, as Madan went on to explain, was often far from the reality. It had traditionally been the practice that when the last trial had been completed and the jury had given its final verdict, those who had been convicted were again brought back up to the court as a group to be sentenced by the Recorder of London, the chief sentencing officer of the Old Bailey (with the exception, from 1752, of convicted murderers, who instead had sentence passed upon them immediately after conviction). By the later eighteenth century, Madan however claimed, “it is now too often the fashion to pass sentence on every criminal as he is convicted, and this with very little preface: So that by the desultory manner in which it is done, and the frequent repetition of it, it becomes so familiar to the hearers, as to lose almost all its effect, and one grand end of the judge’s office is sadly defeated.”

The emotional impact of the death sentence and the authority of the law was moreover undermined in the early nineteenth century by the fact that the overwhelming majority of capital convicts were being pardoned, and the death sentence thus turned into a mere formality. In recognition of this problem, in 1823 a new practice of “death recorded” was introduced, whereby judges could abstain from pronouncing a sentence of death on any capital convict whom they considered to be a fit subject for a pardon.

The carefully-choreographed theatre of sentencing and its emotional impact might also be undermined by open acts of defiance by the convict or the attending crowd. It was complained in the eighteenth century that some capital convicts made light of their sentence by comments and gestures.

The court sometimes decided to postpone or respite a sentence until a later sessions, such as in the case of pregnant female convicts, or for reasons that were unrecorded. In 1848, judges were empowered to invite the jury to respite sentences in cases where the law was doubtful. In these instances, the case was passed on to the twelve judges at the newly established Court for Crown Cases Reserved (superceded in 1907 by the Court of Criminal Appeal).

There are a number of other reasons why a formal sentence might not have been recorded: the convict died, fell ill or was rescued from the court or prison by his friends before s/he could be sentenced. The court might also agree that, in lieu of a formal punishment, the convict would perform some act, such as serving as a soldier for the East India Company, or agreeing to work for an employer. Young convicts were sometimes sent to the Marine Society (established in 1756) for training at sea. Those recommended by the jury for mercy were sometimes simply discharged without punishment, or sent to the care of their master, relatives or other figure of authority.

Detail, William Hogarth, "The Industrious 'Prentice, Alderman of London, the Idle one brought before him & Impeached by his Accomplice", from Industry and Idleness. Plate X. (1747). © London Lives.

Sentencing at Summary Level and at Petty Sessions

At summary level and at petty sessions it was magistrates and justices of the peace (JPs) who passed sentence against convicts. They made their decisions in negotiation with the victim and even the offender themselves. Legal technicalities did not take pride of place in these courts (although the proliferation of summary statutes and greater judicial review in the nineteenth century may have encouraged magistrates and JPs to be more precise), and thus with room for discretion, justices tended to adopt the role of arbitrators and mediators in trying to reconcile and heal disputes. In the later eighteenth century, a quarter of all the complaints brought before the City of London’s summary courts resulted in a formal sentence of punishment, compared to 60 per cent informally settled or discharged, and 16 per cent sent on for jury trial.

Magistrates and JPs at summary level and petty sessions could often choose from a range of possible sentences, including: imprisonment in the house of correction (often at hard labour and/or with a whipping); a fine; whipping; enlistment in the armed forces; or expulsion from the local area under the settlement laws. In the case of property offences, the normal period of confinement in the later eighteenth century was between seven days and one month, and usually involved a whipping.

Sentencing at Sessions of the Peace

It was these same magistrates and justices of the peace, now acting in groups, who passed sentence at sessions of the peace. In this jurisdiction, however, the available sentencing options were much wider, and particularly in one crucial respect: justices at sessions of the peace were able — unlike at summary level and petty sessions — to sentence convicts to transportation and, later, to penal servitude. Such sentences were regularly passed, and reflected the generally more-serious nature of the crimes dealt with there compared to at summary level and at petty sessions. But far more common at sessions were sentences of imprisonment, usually for relatively short periods, in the house of correction.

Magistrates, justices of the peace and judges rarely recorded their reasons for choosing a specific sentence, but influential factors likely included the nature of the offence, statutory rules, the wishes of the involved parties, the character and social/economic status of the accused and the particular outlook and interests of the officials themselves. Indeed, sentencing patterns often varied according to these variables.

In many instances, sentencing options were constrained by statute law. In capital cases, judges were automatically bound to sentence the convict to death. To avoid this situation in cases where they did not believe the offender merited execution, juries frequently found the defendant guilty of a reduced offence (a "partial verdict"), thereby allowing the judge to sentence the offender to a punishment other than death.

If statute law allowed some leeway in the sentencing options open to the judges (for instance, in the choosing between imprisonment, transportation, a fine or whipping etc.), then the severity of the crime appears to have been of some importance. Those convicted of higher-value thefts tended to receive more stringent sentences, whilst those with mitigating circumstances often got off relatively lightly.

The gender and age of the offender also played a major role.

In overall terms, the pattern of sentences passed against female offenders was very different to that passed against men, often due to legal reasons. The public whipping of women was abolished in 1817, for instance, whereas the public whipping of men continued into the 1830s and was not abolished until 1862. Moreover, only men could be sentenced to military or naval duty. In cases where men and women were convicted of the same offence, however, the sentencing patterns did not vary to any significant extent between men and women. For instance, in cases of pocketpicking at the Old Bailey between 1780 and 1909, 49% of men were sentenced to imprisonment and 43% to transportation: similarly, 45% of women convicted of this offence were sentenced to imprisonment, and 48% to transportation.

Unlike gender, there were no legal rules dictating that offenders of different ages should be sentenced in particular ways. That did not mean, however, that sentences did not vary according to age in practice. Far from it, in fact. Judges utilised the discretion available to them in many categories of non-capital offences to tailor sentences with the age of the offender in mind. In cases where offenders were convicted of the same type of crime, teenage offenders were more likely to be sentenced to a whipping or branding, followed by release, whereas those in their 20s and 30s were more likely to receive the harsher sentences of imprisonment or transportation. Middle-aged and eldery offenders (particularly those over the age of 55) convicted of the same offence meanwhile were much less likely to be sentenced to transportation, as this age group were deemed unsuitable for being sent overseas to build a new colony. 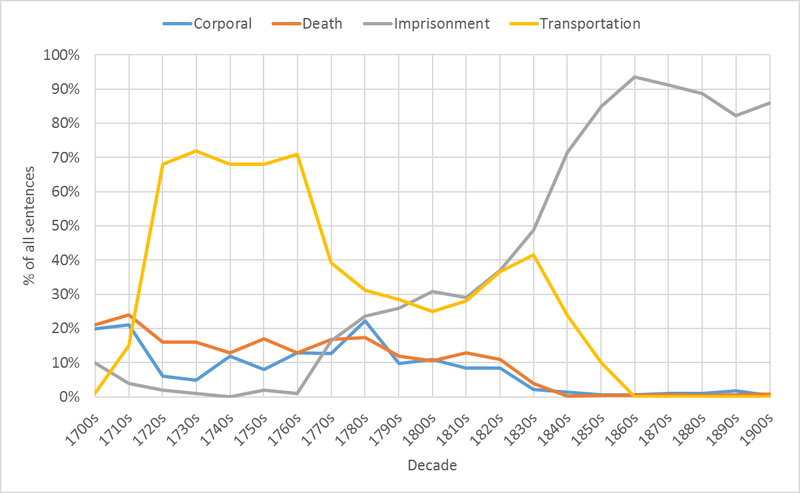 Anecdotal offence suggests that other factors also played a role in sentencing decisions. Evidence of previous offending, the perceived "character" of the offender and their general behaviour (including their sobriety, honesty and standing within their community) were likely all considered by the judge when making sentencing decisions. Indeed, a key element of the trial was establishing the character of the offender, as much as the apparent guilt or innocence of the accused.

Sentencing patterns at the Old Bailey changed dramatically between the eighteenth and early twentieth centuries. The period saw the establishment of transportation as a systematic sentencing option in cases that did not merit death, first to America and subsequently to Australia. It saw the rise, too, of mass imprisonment in a range of formats. In the 1780s, sentences of death reached levels not witnessed since the early seventeenth century, before a mass repeal of the death penalty in the 1830s and 1840s restricted its use to a handful of offences. Other sentences such as whipping, branding and the pillory were likewise increasingly restricted or even abolished. In sum, over the years 1780–1925 the sentencing options open to judges at the Old Bailey were fundamentally restricted. From the "penal plurality" of the eighteenth century, by the later nineteenth century imprisonment accounted for over 90 per cent of all the sentences passed at the Old Bailey.