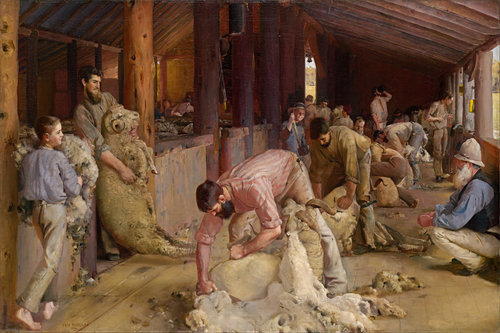 When the British government established a penal colony in New South Wales in 1787, they possibly envisaged that convict transportation to the Australian colonies would last for a number of years, decades or over a century maybe, but they would probably have gasped at the reasons why some colonies campaigned to end the trade in "unwilling emigrants". This page discusses the background to free settlers and migrants to Australia, while the intertwined history of transported convicts is the focus of Transportation and Convicts and Colonisation. By the 1850s, New South Wales had become a desirable place for new settlers. The rich farmland and burgeoning agricultural economy attracted many who were dissatisfied with life in the British Isles.

"Boosters" talked up the benefits of taking the long voyage down south. So too did former convicts. The British were unsettled by stories of "n’er-do-wells" they were punishing by exile making their fortunes and encouraging friends and relatives to join them. The authorities in New South Wales, on the other hand, wanted their colony to be seen as a land of opportunity for entrepreneurs, not as a magnet for the poor and (potentially or definitely) criminal.

The anti-transportation forces combined to turn ships away from New South Wales, and towards Tasmania. Van Diemen’s Land was, as is well known, dependent on convict labour to establish itself. By 1855, however, that colony too refused to take more convicts. The Swan Colony in Western Australia still required convict labour, and so another (nearly) ten-thousand convicts were sent to Fremantle. Even there though, they requested those who were sentenced to more minor crimes, and they ended the convict trade in 1868. Gibraltar took in those serving penal servitude until 1875, but essentially the British were done with convict transportation by 1868.

How did the main sites of transportation - New South Wales, Van Diemen’s Land and Western Australia - all fare when they transformed themselves from penal colonies into civil colonies? 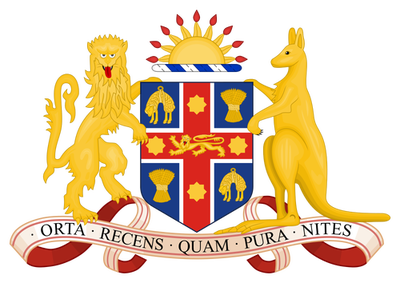 The New South Wales coat of arms. From Wikimedia Commons.

The history of NSW in the mid-nineteenth century is substantially about gold and succession. The first Australian goldrush took place in NSW in 1850, but the discovery of substantial gold deposits in the new colony of Victoria in 1851 caused a migration from one neighbouring state to the other. Further migration took place in 1858, when a new gold rush began in northern NSW. By 1859, northern NSW had seceded into a new colony, Queensland. In the 1850s, Melbourne had a larger urban population than Sydney, although NSW (mainly due to continuing gold discoveries in inland towns) maintained a healthy population of 300,000.

Economically, the colony was on a sound footing from the 1850s. Responsible government was granted to NSW in 1855, and all males over the age of twenty-one were enfranchised in 1858 (in 1896, Tasmania became the last colony to grant universal male suffrage). As the economy strengthened further in the 1860s, ethnic and class tensions subsided. British troops were no longer needed and they were withdrawn in 1870.

NSW and Victoria competed with each other economically, in sports events and culturally. Both Sydney and Melbourne vied to be the capital of the emerging country of Australia. Both would lose out. Nevertheless, the development of NSW continued, and its residents and politicians played important roles in moving the colonies towards Federation in 1901. 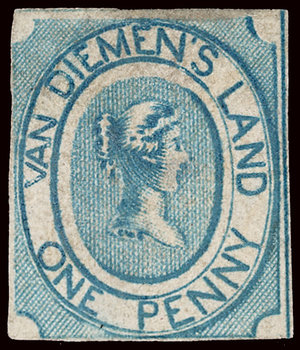 Van Diemen’s Land (or VDL) was established almost solely as a convict penal colony and place of secondary punishment. When transportation to VDL ceased in 1853, the colony was still dominated by infrastructure created by, and for, convicts. The majority of the population were ex-convicts for decades after the last convict ship had landed, and the population had a gender imbalance until the 1970s because of the male footprint of convictism.

VDL became Tasmania in 1856, in an attempt to try and distance the colony from its former function. In the same year, the newly elected Tasmanian parliament sat for the first time. By 1858, Hobart Town had grown to occupy approximately a square mile, the population was nearing 60,000, and economically, visually and socially, the town was very different to the place that the convicts had first landed. Hobart now had a Supreme Court (1824), Botanical Gardens (1828), a new Government House (1829) to replace its dilapidated predecessor and the Theatre Royal (1834) for entertainment.

The economic downturn of the 1840s was followed by labour shortages in the 1850s, as men left to find gold in Victoria, and public buildings were not erected as quickly as they had been (although many had already been built and Hobart was clearly a place of importance). St David's Anglican Cathedral was built in 1868, followed two years later by a new Public Library (1870). In 1876, Truganini, described as the last full-blooded Tasmanian Aborigine, died in Hobart. The penal settlement at Port Arthur was closed in 1877, but the last of the convicts, aged and some in ill-health after so many years of captivity, were still living there as the complex became an infirmary. Up north, the town of Launceston was redesignated as a city in 1888, and the University of Tasmania opened its doors in Hobart in 1890.

The boom years of the 1880s were then followed by the bust of the 1890s, when recession and economic downturn returned to Hobart. However, even then the town was still visually attractive enough to catch the eye of Mark Twain, the American author, who was visiting Hobart in 1895:

"How beautiful is the whole region, for form, and grouping, and opulence, and freshness of foliage, and variety of colour, and grace and shapeliness of the hills, the capes, the promontories; and then, the splendour of the sunlight, the dim, rich distances, the charm of the water-glimpses! And it was in this paradise that the yellow-liveried convicts were landed, and the Corps-bandits quartered, and the wanton slaughter of the kangaroo-chasing black innocents consummated on that autumn day in May, in the brutish old time. It was all out of keeping with the place, a sort of bringing of heaven and hell together" (Mark Twain, Following the Equator, 1897: 127).

When the last convict ship docked in Fremantle harbour on 9th January 1868, the convicts disembarked into a colony which had developed considerably from its origins in 1829. The colony started with low numbers of free settlers and a low level of infrastructure. However, the colonists worked hard to establish a working community until the 1850s when labour shortages threatened the continued progression of the colony.

The sometimes free or cheap convict labour then reinvigorated the colony. Public buildings sprang up, leisure and community facilities were developed, and Perth became a viable city which acted as a social net that dragged in more and more settlers.

As with VDL, the Fremantle/Perth area had a significant population of ex-convicts, and many of those people were incapable of staying completely out of trouble. The level of petty theft and alcohol-related offending by ex-convicts, and also by new settlers, meant that the prison (built in 1851) became a significant place in the centre of Fremantle.

By 1871, there were just under 6,000 people in Perth. The Fremantle/Perth conurbation then boasted a Town Hall, a boys’ school, a cathedral and a large Government building. After the gold rushes of the 1890s, the population of Perth grew to 36,824 people, by which time it had another cathedral, a new courthouse, a large hotel and many retail establishments. By 1901, the population had reached over 100,000.

The 1901 Federation and the "Birth of Australia"

In 1901, the Australian colonies of New South Wales, Victoria, Tasmania, South Australia and Western Australia, together with the Northern Territory, federated into one country. A new parliament was established in Canberra (in what is now Australian Capital Territory), and delegates from each State directed the fortunes of a country which still cleaved culturally and economically to Britain, but which would rapidly become much more than Britain’s "Southern Farm".

The nation is said to have been forged not in Canberra but on the beaches of Gallipoli (where Australian soldiers perished in a forlorn assault on Turkish fortifications in the First World War). The country experienced the same kind of economic turmoil as the UK in the 1920s and 1930s (with Western Australia nearly leaving the Federation in 1922), but the country enjoyed growth thereafter, stimulated and enriched by migration from Europe and the Far East. 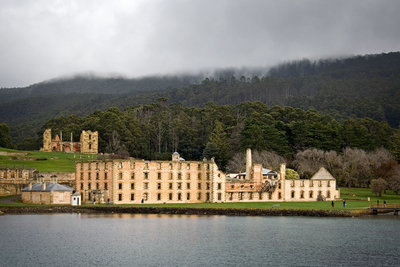 Migration has long been part of the Australian story. The indigenous people were initially confronted (disastrously) by British colonial settlement, then approximately 168,000 convicts provided an Anglo-Irish base for Australian society. The rush for gold after 1851 brought in new European, American and Chinese settlers in their thousands, and thereafter a torrent of new settlers came from around the globe to join Australian society.

The dominant culture remained stubbornly British for a long time, however, and the "convict stain" weighed heavily. Australian culture was positioned as backward, rude and uncouth. The myth that most Australians were descended from convicts, and were therefore uncivilised, flourished.

Convict history is still a major prop for the Australian heritage industry, but the story has changed. Australian convicts are now seen by many as the founders of the State, a triumph of rebellious spirit emerging from a flawed criminal justice system. The opening ceremony of the Sydney Olympics revelled in a playful portrayal of Australia’s convict past.

The proportion of the Australian population that actually has convict lineage is unknown, is probably much lower than the proportion of people descended from free settlers and, in any case, we know that criminality is not genetically inherited. However, the convict stain has been a cultural trope for a long time, and possibly still fuels researchers to investigate sources of convict history.

There are many contemporary sources which survive. Most states have holdings of annual statistics. These contain (from 1824 in Tasmania’s case): statistical registers and commentaries on the economy and trade, imports and exports, employment and wages; the number and annual costs of schools, asylums, hospitals, prisons, police and other colonial institutions; the number of marriages, births, deaths; the number of people who died in hospital and from which disease; and they also contain detailed breakdowns of population and demographics (usually by gender, age, place of origin and other features).

These statistical registers change format over the years, but remain a valuable source of data for the colonial and the Federation period. There are also a number of published national histories, some of which are detailed below, together with some further reading on crime and policing in mid-nineteenth-century and twentieth-century Australia.