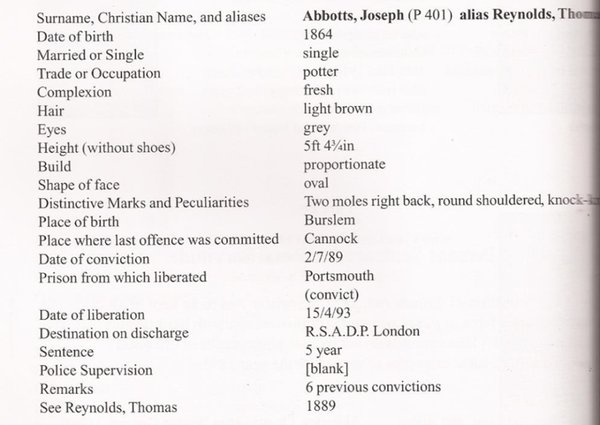 Using biographical and life-course research methods to study convict lives, historians and criminologists have been able to identify the circumstances which lead convicts to desist from crime. A number of key factors have been identified, including the impact of the punishments received, ability to find secure employment, and the nature of family life, including marriage, having children, and the death of spouses. The wealth of inter-linked records in the Digital Panopticon allows this research to be carried out on much larger cohorts of convicts than ever before. Most notably, it allows a systematic comparison of the impact of transportation to Australia and imprisonment in Britain to be undertaken .

This type of research has been labelled biographical or whole-life research (Godfrey 2010). Most studies by crime historians and criminologists attempt to answer how and why onset into criminality takes place; and also what makes some children persist in criminal careers whilst others desist from crime. This kind of research is not new. Sheldon and Eleanor Glueck documented the ‘criminal careers’ of 500 young male offenders, who had been committed to Massachusetts reform schools, and compared their outcomes to 500 non-offending children (Glueck and Glueck, 1930, 1934, 1950, 1968).

Sampson and Laub followed-up the Gluecks’ original 500 young male offenders, and explored their lives until they hit seventy years old (1993, 2003, 2006). They found that boys who were at ‘high risk’ of having a criminal career did not always go on to have one, indeed many either never committed an offence, or had very short criminal careers. They argued that desistance is most likely to happen where individuals are supported by strong informal social controls to make situated choices (2006).

In Chain Letters: Narrating Convict Lives (1997) Lucy Frost and Hamish Maxwell-Stewart applied new academic understandings of the convict transportation system to explore the lives of individual convicts. They pieced together convict lives from scattered documentary fragments in order to explore what happened to those men and women transported beyond the seas to the Australian penal colony in Tasmania (Van Dieman’s Land).

About ten years later, Godfrey, Cox and Farrall used digitised archives to reconstruct the lives of persistent offenders who passed through the courts in the northwest of England between 1880 and 1940. The first major finding was that many (40 per cent) of even the most persistent offenders desisted before they died; and three-quarters of those well before they died. They also assessed the correlations between relationship formation, employment, residential stability, and desistence from crime, finding a complex and sometimes counter-intuitive set of processes at work. Marriage and having children, as modern commentators have found, appear to act as mechanisms for reforming men who wish to please or win approval from their spouses or who generally accept the responsibility that parenthood brings. However, in the nineteenth century, when women generally had less power in society, and less power within spousal relationships, the impact marriage had on male offending was not as strong. When it came to finding a job, it was clear that employment was effective at slowing persistent offending, and even more effective when the job was a career with prospects, and regular chances for advancement. In their study of serious offenders published in 2010, Godfrey, Farrall and Cox found that lack of stable employment, the absence of strong bonds in the community, and the lack of a good relationship, all tended to encourage further offending and a peripatetic lifestyle. 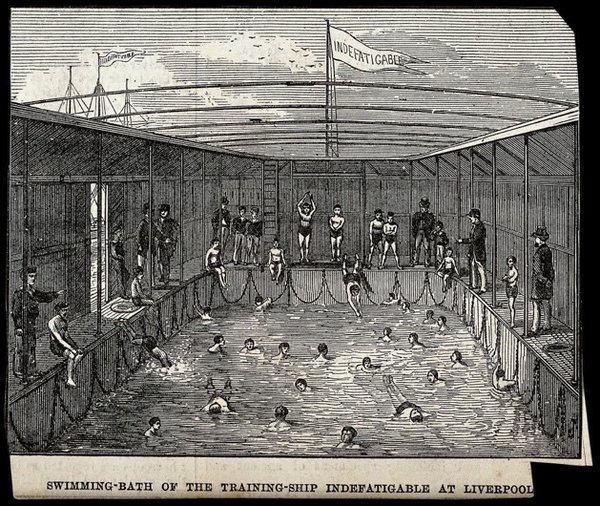 Swimming Bath of the Training-Ship "Indefatigable" at Liverpool. From Wikimedia Commons.

Recent research has focused on children who had difficult starts in life. The 'TransFive' investigation followed the lives and descendants of nearly two-hundred boys sent to a Dutch reform school in the 1910s (Bijleveld and Wijkman, 2009; van de Weijer, Bijleveld, Blokland, 2014); and in Young Criminal Lives, Godfrey, Cox, Shore and Alker investigated the different life-outcomes of five hundred children sent to various reformatories, industrial schools, and training ships in north-west England between 1850 and 1920. They found that, contrary to the adult offenders studied by Godfrey et al. (2007, 2010), children who had been in institutional care tended to marry earlier, and for that relationship to have a strong inhibitive effect on offending behaviour. This is less likely to be because their wives had more influential power, but because boys who had grown up lacking parental care were more likely to want to keep hold of a good relationship in their adult life – and that meant keeping out of trouble and keeping out of prison. This study also found that the quality of care, which was variable across the juvenile care system, was also key. Good experiences inside the reformatory led to constructive long-term relationships between staff and former inmates, which helped to support children as they grew into adults. The most influential factor, however, was the training (job-specific employment skills) provided by the institutions, and the feeding of the children directly into a job after leaving the institution. The tragedy for those on the military training ships, was that this meant the armed forces, and many were killed in World War I.

Online digital data is now being used more and more to piece together information from different sources to "reconstruct" people’s lives. The Old Bailey Online (2003-3008) contains details of all trials carried out at London’s Central Criminal Court between 1674 and 1913, comprising nearly two hundred thousand criminal trials. In turn, providing information for approximately one million defendants, victims and witnesses. A successor project, London Lives 1690-1800, digitised a much wider range of records, primarily related to poor relief and criminal justice, and includes access to 3.35 million name instances.

The assembly of collections of records relating to single individuals requires record linkage. While London Lives relied on manual linkage, but struggled with the limited evidence available in eighteenth-century records to ensure links are accurate, the emergence of more detailed record keeping about convicts in the nineteenth century means that record linkage can be automated, using sophisticated algorithms. The Digital Panopticon combines automated record linkage with some manual checking and additional links to construct Life Archives for hundreds of thousands of individual convicts.

A wide range of criminal and civil datasets have been interlinked. While our focus has been on the 90,000 men and women convicted at the Old Bailey between 1780 and 1868, the Digital Panopticon includes records pertaining to millions more convicts documented in the archives of criminal justice, transportation, and imprisonment from the late eighteenth to the early twentieth centuries. Datasets which provide particularly rich data on recidivism include:

When these datasets are interlinked with the other records in the Digital Panopticon, researchers can identify the chronology of people’s lives, viewing known offending and civil events sequentially as Life Archives and in visualisations. The Digital Panopticon thus reveals the lives of thousands of people, including their crimes, the punishments they received, and their family events. 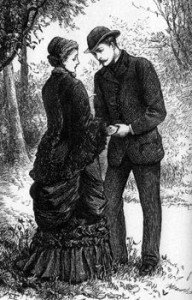 Biographical Research and the Digital Panopticon

The ability to survey the whole life-course allows historians to explain why the lives of individuals may have taken particular directions. Whilst the biographical research that has been carried outi n previous studies has only been able to collect relevant details of a few hundred people’s lives at a time, the Digital Panopticon allows us to collect hundreds of thousands of life-archives. It can therefore transform biographical research. It will allow us to correlate marriage and offending, having children and desistence, and examine whether particular kinds of punishment increase of decrease the chance of future offending. Indeed, the huge amount of biographical data and detail about prisoners and ex-convicts now available means that we will now know more about eighteenth and nineteenth-century prisoners than we do about prisoners serving time today. Most importantly of all, it will allow us to finally answer the question – which was more effective, transportation or imprisonment?