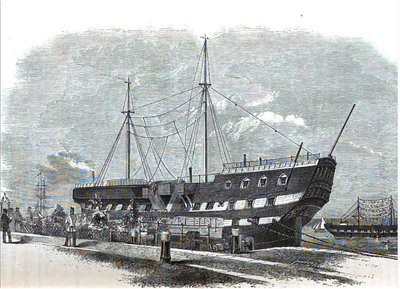 [Anonymous], "The 'Warrior' hulk with the 'Sulphur' washing-ship in the distance", from Henry Mayhew and John Binny. The Criminal Prisons of London, and Scenes of Prison Life, Volume 3 of The Great Metropolis (1862), p. 256. From Wikimedia Commons.

Originating with the penal crisis caused by the outbreak of war with America in 1775, the hulks were intended as a temporary expedient for housing convict prisoners, but they remained in use for over eighty years. Despite the fact they were intended as places to hold prisoners before they were punished in other ways (primarily by transportation), they constituted a form of punishment in themselves, and for some convicts they were the only form of punishment they experienced before their release. The majority of the convicts whose lives are documented in the Digital Panopticon spent some time on the hulks.

Hulks were decommissioned (and often unseaworthy) ships that were moored in rivers and estuaries and refitted to become floating prisons. The outbreak of war in America in 1775 meant that it was no longer possible to transport British convicts there. Transportation as a form of punishment had started in the late seventeenth century, and following the Transportation Act of 1718, some 44,000 British convicts were sent to the American colonies. The end of this punishment presented a major problem for the authorities in London, since in the decade before 1775, two-thirds of convicts at the Old Bailey received a sentence of transportation – on average 283 convicts a year. As a result, London's prisons quickly filled to overflowing with convicted prisoners who were sentenced to transportation but had no place to go.

To increase London’s prison capacity, in 1776 Parliament passed the "Hulks Act" (16 Geo III, c.43). Although overseen by local justices of the peace, the hulks were to be directly managed and maintained by private contractors. The first contract to run a hulk was awarded to Duncan Campbell, a former transportation contractor. In August 1776, the Justicia, a former transportation ship moored in the River Thames, became the first prison hulk. This ship soon became full and Campbell quickly introduced a number of other hulks in London; by 1778 the fleet of hulks on the Thames held 510 prisoners.

Demand was so great that new hulks were introduced across the country. There were hulks located at Deptford, Chatham, Woolwich, Gosport, Plymouth, Portsmouth, Sheerness and Cork. The hulks themselves varied greatly in shape and size. Many were decommissioned former naval vessels, but civilian ships were also used. For example, the Warrior at Woolwich could hold up to 400 inmates, whereas the Discovery, moored at Deptford, only held half that number. 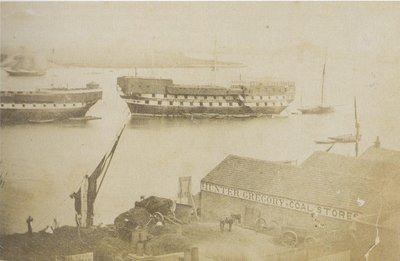 The Hulks as a Form of Punishment

Prisoners kept in the hulks were set to hard labour in dockyards or on the banks of rivers. Those on the Thames were put to work improving the navigability of the river by removing gravel and soil from its shores. This work was backbreaking, exhausting and very public; convict chain gangs provided a moral spectacle and example for all who saw them. The rations provided by the contractors were inadequate, in that they did not provide the convicts with the energy or nutrition required to perform such arduous work. This was done on purpose – the parliamentary act authorising the use of hulks stipulated that convicts were to be fed little other than bread, "any coarse or inferior food", water and small beer. Convicts frequently went hungry and often became malnourished. This was exacerbated by the fact that there were no charitable food handouts available to convicts on the hulks, as there were in conventional gaols. In fact, visiting was extremely limited for fear that tools used to escape could be smuggled aboard.

This regime was so punishing that, after a short time, men became demoralized, weak and susceptible to disease. The poor sanitation and cramped conditions meant that infection could spread particularly quickly. From the first introduction of the hulks, diseases such as Cholera, Dysentery and Typhus were rife. The convict mortality rate was exceptionally high – about a third perished in the first few years. In response, the diet was improved and better medical care was provided.

Prisoners' mental health was also compromised. Among other observers, the reformer John Howard noted, following a visit to the Justicia in October 1776, that the prisoners suffered from a "depression of the spirits" (Hitchcock and Shoemaker, pp. 334-336).

Discipline was severe. Convicts were frequently locked in irons, in part to prevent the possibility of swimming for their freedom. At night, they were locked in below the deck and the prisoners were simply left to their own devices among the rows of hammocks. Infractions were punished with flogging, extra irons and, for the worst offenders, confinement in the "black hole".

The bad atmosphere on board encouraged the development of a culture of resistance among the prisoners. Convicts could articulate their grievances to visiting prison reformers and physicians, but it took time for conditions to improve. Prisoners also took direct action and mutinied and committed mass escapes. These were not difficult to organise; confined in large open spaces below deck there was plenty of opportunity for them to work together and formulate plans of action. There were four mass escapes in the first months after the establishment of the hulks and they continued to happen at regular intervals. The strong bonds of friendship based upon their shared suffering meant that they might rebel again again after they left the hulks, including when on board transport ships (Hitchcock and Shoemaker, pp. 335-338, 371-372). 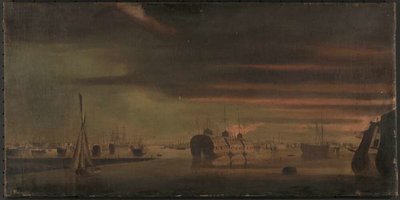 The Hulks in the Nineteenth Century

Following a difficult search for a new place to send convicts, transportation was reestablished in 1787 with the new destination of Australia. The hulks continued to be used, however, as a place to keep convicts until they could depart on a transportation ship. Some convicts, who for whatever reason (often because they were unwell) were not taken up by a transport ship, remained on the hulks for long periods.

Inevitably, some convicts were discharged back into society without being transported, and their period in the hulks was their only punishment. Even in the early 1840s, the hulks held over 70 per cent of convicts incarcerated in England (McConville, p. 198). Most of the convicts whose lives are documented in the Digital Panopticon spent some time in the hulks, though it was not normally their only punishment.

The Hulks Act was periodically renewed, and in 1823 parliament authorised their use in any British colony. Hulks were established in Bermuda in 1824 and Gilbraltar in 1842; in both colonies the convicts levelled land, constructed roads and worked on dockyards. Bermuda received some 9,000 convicts up to 1863.

Criticisms of conditions in the hulks, in terms of diet, medical care and mistreatment by officials, continued throughout their existence. Moreover, with growing use of reformatory regimes in land-based prisons, the hulks were increasingly seen as anomalous: in contrast to the "silent" or "separate" systems adopted in prisons, prisoners were able to freely associate among themselves, visitors became frequent and there was no religious and moral instruction.

With the opening of Pentonville Prison and increased use of Millbank Prison from 1843, fewer convicts were sentenced to the hulks, which were increasingly only used for old and infirm prisoners and those in poor health. After 1852, only two hulks survived, and the Hulks Act was finally allowed to expire in 1857. But many prisoners were held in hulks in Bermuda until 1863 and in Gilbraltar until 1875 (McConville, p. 203).

The image of the hulks as a nightmarish place of confinement continued in public culture. Henry Mayhew reported on a visit he had made to the Defence hulk in the 1850s in his book The Criminal Prisons of London (1862). Describing the layout of the ship, he makes a stark comparison between the spacious quarters of the governor and his men and the convicts, who were kept behind bars "very like those found in the zoological gardens". Visiting early in the morning when many of the convicts were still asleep, Mayhew went on to consider what they may be dreaming about. Many, he concluded, would not be able to escape the horrors of their situation, even in their sleep. These horrors were famously evoked in Charles Dickens' Great Expectations (1861).

Each hulk only held one sex, and for the most part that was men. There was only ever one hulk for female prisoners – the Dunkirk, which was moored at Portsmouth and was in operation from 1784-1791. Women sentenced to transportation were deemed unfit to carry out such heavy manual labour, so the Hulks Act stipulated that they were to be confined instead in houses of correction, also at hard labour (but with less demanding tasks, such as beating hemp). Men thought incapable of physical labour were also sent there instead of the hulks.

For a considerable period, youths as young as eight who were sentenced to transportation were kept in hulks alongside adult prisoners. Boys between 11 and 19 accounted for up to 10% of the prisoners (Johnston, p. 75). They lived in the same atrocious conditions as the men, although, inevitably, they faced additional dangers because of their youth. Around 1825, the Euryalus at Chatham became a hulk solely for young boys. Here the regime was especially severe. Boys (aged no more than 14) were kept below deck for 23 hours a day and forced to do manual labour. They lived in constant fear of physical abuse from the guards and a culture of gang violence was embedded. From 1838, juvenile offenders were increasingly committed instead to the specially constructed juvenile prison, Parkhurst, and in 1843 the Euryalus ceased to be used for young offenders. 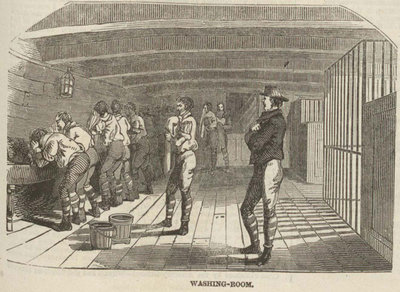 The Digital Panopticon holds several sets of records which document information about prisoners on the hulks. See Hulks Registers.

Much of the research conducted for this page, and a first draft, were the work of Samuel Hadfield, MA student in History at the University of Sheffield, 2015-2016. Robert Shoemaker subsequently developed the page, with additional contributions by other members of the Digital Panopticon project team.