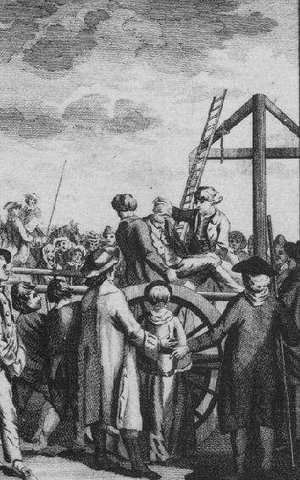 [Anonymous], Half-hanged Smith. - John Smith was convicted of robbery in 1705 but reprieved while actually on the scaffold. Reproduced courtesy of and with thanks to Mark Herber from Criminal London: a Pictorial History from Medieval Times to 1939 (Chichester, 2002).

It was by no means inevitable that convicts would suffer the specific punishment(s) that they had been sentenced to by the courts. Through the pardoning process, many convicts had their initial sentence commuted to a lesser punishment (a conditional pardon), or were even granted absolution from the crime without any further sanction (a free pardon), as an exercise of the royal prerogative of mercy.

The pardoning system in London was, in several important respects, very different to that in the rest of England and Wales. In the provinces, judges submitted a "circuit letter" at the conclusion of their respective assizes, listing those condemned to death whom they recommended for royal mercy, and suggesting what conditions (if any) such pardons should be granted. Judges were not required to justify these decisions, and from 1728 their recommendations were virtually always put into practice by the central government.

Such recommendations account for most capital pardons in provincial cases, but there was also another possibility. Those convicts not included in the judge’s circuit letter could submit a petition to the crown asking for the king’s mercy, as likewise could the friends, family, neighbours and other supporters of the offender. In this instance, reasons would be put forward in support of the convict’s worthiness for pardon. The petition(s) might then be passed up through a chain of interested parties of increasingly high social status before being sent on to the Home Office.

Upon receiving the petition(s), the Secretary of State usually (although not in every instance) passed the materials on to the judge who had presided over the trial, and requested that they provide a written report of the case, including their recommendation as to whether clemency should be granted or not, and upon what basis. In their reports, judges typically cited the reasons why the offender had been left to hang in the first place, along with any reasons for or against mitigation of the sentence. With the judge’s report in hand, the final decision over life or death rested with the Home Secretary, occasionally with input from the monarch (their decisions being recorded in the Home Office Criminal Entry Books 1782-1876).

In London, by contrast, the pardoning system rested in the hands of what came to be known as the "hanging cabinet", whereby the Recorder of London, the chief sentencing officer of the Old Bailey, was charged with reporting to a meeting of the King in Council all those who had been sentenced to death at one or more previous sessions of the court. As with provincial assize cases, petitions could also be separately sent to the King or the Home Secretary, and these would be passed on to the Recorder for a written report and recommendation, just as the assize judges were required to do. But in London there was no equivalent of the circuit letter, since no reprieves were awarded at the conclusion of the sessions of the Old Bailey. Whereas decision making for assize cases largely rested with the judges, in the metropolis the key decisions were instead made by the hanging cabinet in response to the "Recorder’s Report". As such, pardoning in London cases may have been more reflective of governmental concerns than that of individual counties outside the metropolis. 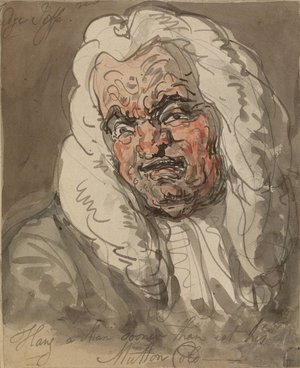 The leading figures within the hanging cabinet appear to have been the Recorder, the Home Secretary and the Lord Chancellor, and whilst discussion is evident in at least some instances, pardoning decisions were likely made in reference to the Recorder’s recommendations, with support from those other two individuals. There was a considerable amount of work for the Recorder in writing what was a lengthy report of all those sentenced to death at each sessions of the Old Bailey.

In preparing these reports, the Recorder could refer to a number of sources of information. For reports of the trials, recorders drew first and foremost on the accounts printed as the Old Bailey Proceedings, copies of which were also made available to the Lord Chancellor and the Home Secretary in advance of meetings of the hanging cabinet. Indeed, such was their reliance on this source that in the mid-eighteenth century, the Recorder’s Reports were largely duplicates of the Proceedings. Any petitions sent to the Home Office in support of those condemned to death might also provide the Recorder with further details. Recorders evidently also requested information about the character and behaviour of convicts after sentence from the keeper and chaplain of Newgate.

Despite the wealth of information available, however, the haste with which meetings of the hanging cabinet were conducted in the later eighteenth century should not be underestimated, particularly in contrast to the relatively substantial amounts of time that were devoted to it from the 1820s. In the 1770s and 1780s, it regularly took little more than an hour for the cabinet to review upwards of ten or fifteen cases. Whereas overarching decisions about whether to leave an offender for execution appear to have been reached with some haste by the hanging cabinet, the finer details of what condition(s) the reprieved were required to serve — decided separately by the Recorder and the Home Secretary — often took weeks or months to finalize, and it was not unusual in for such conditions to be altered two or three times for individual convicts.

It had traditionally been seen as necessary for convicts to accept a pardon in order for it to take effect. However, a crisis prompted by the refusal of seven women and twelve men in 1789 to accept a royal pardon from execution upon the condition of transportation to the new penal colony of Australia forced the authorities to revise the policy, thus reducing the discretion open to convicts and the courts. From 1797, conditional pardons were tantamount to orders which did not require the formal acceptance of the convicts themselves.

Following the removal of capital punishment from all but a small number of offences in the 1830s, this process changed. In 1837, the Recorder’s Report was abolished and instead the Secretary of State oversaw reviews of capital cases, with his recommendations subject to royal approval. While the number of cases considered was much reduced, a significant proportion of death sentences continued to be reprieved. Following the creation of the Court of Criminal Appeals in 1907, cases of doubtful convictions were no longer heard by the Home Secretary, but other capital cases continued to be reviewed in this way until 1958.

Much less is known about the pardoning process in relation to convicts who were sentenced by the courts to other forms of punishment than death (such as transportation or imprisonment). It seems however that pardons could also be granted to such convicts following a review conducted by the Recorder of London and the Home Secretary, without any input from the cabinet or the king. 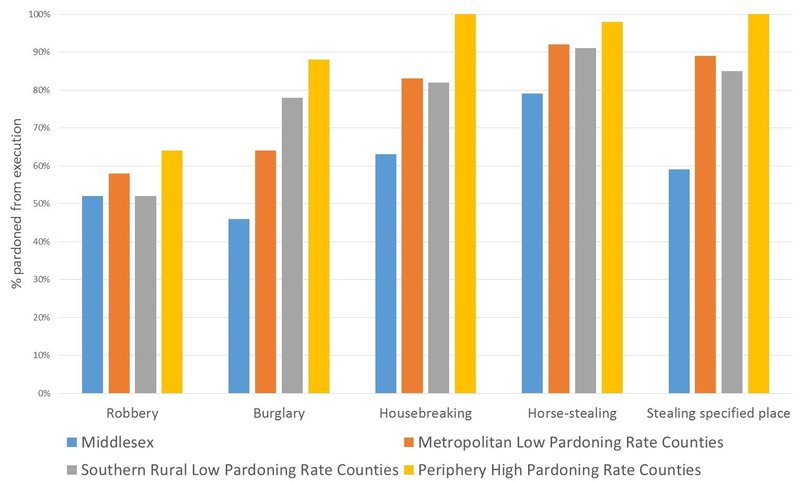 The proportion of capital convicts who were pardoned from execution in London increased steadily over time, from 30-50 per cent pardoned in the 1760s, to 80-90 per cent in the 1820s, and as much as 97 per cent in the 1820s. This did not necessarily mean, however, that fewer offenders were being hanged as a result: in fact, the absolute number of convicts executed in the later eighteenth and early nineteenth centuries was extremely high, particularly in the 1780s, 1810s and 1820s. It was this absurd situation — of 9 out of every 10 capital convicts being pardoned, yet nonetheless still frighteningly large numbers of executions — that stimulated the repeal of the death penalty in the 1830s. 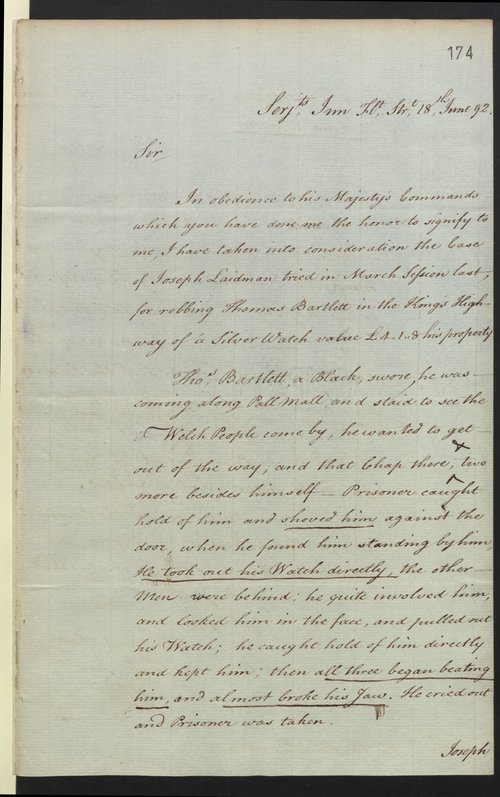 Pardoning rates not only varied over time, but also according to a number of other variables, including the gender and age of the offender, and the nature of the offence. Such factors have therefore been seen as influential criteria in pardoning decisions, along with other factors that are less easily quantifiable but evidently still important.

There is some controversy among historians over how the pardoning system worked, and particularly over the extent of elite influence over the system. Although elite support and claims to respectability could in many instances be crucial, several historians have instead suggested that in the majority of cases, the issues of greatest importance to the king’s ministers who controlled the pardoning system were, as John Beattie concludes,

“the nature of the offence — particularly the level of violence that had been involved — the age, gender, and criminal record of the defendant, and the evidence given at the trial by the witnesses, both for the prosecution and defence.”

Ultimately, it was the most threatening criminals who tended to receive their full punishments.

The severity of the crime appears to have been of upmost importance in pardoning decisions. Those convicted of violent and other threatening offences were likely to be hanged, while those guilty of simple thefts were normally pardoned. Murderers were almost always executed. From the second half of the eighteenth century some capital offences — including pickpocketing and shoplifting — ceased to lead to any executions of Old Bailey convicts.

The gender and age of the offender also played a major role. When compared with men convicted of the same offence, women were far less likely to be hanged. In terms of age, it was those in their late teens and early to mid-20s were most likely to be hanged, with both younger offenders and those older than 26 (and particularly those over 36) more likely to be spared the noose.

At times of sudden increases in the number of prosecutions brought before the courts, and consequent anxieties about the state of crime, capital convicts were less likely to be granted mercy. However, there were limits: it was also possible to hang too many offenders, which would risk a backlash from contemporaries who did not wish to see a bloodbath, as happened during the penal crisis of the 1780s.

In many cases, elite support was crucial in helping to secure a pardon, through lobbying the judges, ministers and the king. And by using their connections to save offenders from the noose, England’s ruling elite were able to demonstrate their power and authority, in addition to inducing deference and obedience form their social inferiors, thus upholding the hierarchies at the heart of English society.

Capital convicts’ fates were also, finally, shaped by a number of considerations external to their specific cases. Some judges appear to have been consistently more lenient than others in recommending condemned convicts for mercy, based upon their attitude to capital punishment, and their sense of how often it needed to be used. While this doesn’t apply to London, where decisions were made by the hanging cabinet, the possibility remains that the personal dispositions of key players in these discussions shaped decision making, particularly in a period when the continuation of capital punishment was under debate.

In short, a whole range of criteria might have come into play when pardoning decisions were being made. Through the Petitions for Pardon 1797-1858, Judges Reports on Criminals 1784-1827, Home Office Criminal Entry Books 1782-1876 and the early England and Wales Criminal Registers 1791-1892 included in this website, those pardoning decisions — and the impact they had on the punishments suffered by Old Bailey convicts as a result — can be studied in detail.