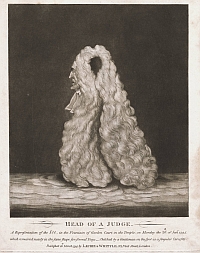 [Anonymous], Head of a Judge. A Representation of the Ice, in the Fountain of Garden Court in the Temple (1795). © Courtesy of The Lewis Walpole Library, Yale University.

The "Judges Reports on Criminals 1784-1827" records contain details of some 1,127 pardoning reports and letters written by the Recorder of London and other trial judges on individuals convicted at the Old Bailey between 1784 and 1827. These abstracts of the original reports typically give the name of the convict, the date of the trial and the sentence passed, a short summary of the documents bundled with the reports and the grounds cited in favour of clemency, the recommendation (if any) made by the judge and other additional information.

Offenders who had been convicted and sentenced by the courts were permitted (along with their families and friends) to petition the crown for the reduction or revocation of their sentence. After receiving such petitions, the Home Office usually, although not always, forwarded the petition and any supporting documents to the trial judge (or the Recorder of London, if it was a case from the capital), asking for a report and recommendation on the case. In most instances the Home Office followed the recommendation made by the judge.

The judges’ reports that were returned to the Home Office vary a great deal in length and content. Some provide only brief accounts, whereas others are detailed reports on the offender, the crime and the trial (noting the reasons for the original conviction and sentence). Most contain a thorough report of the evidence given at the trial, along with a brief final summary, indicating why the judge favoured the appeal for clemency, opposed it, or took a neutral attitude. As Peter King explains, "these often cryptic conclusions, on which the prisoner’s life so frequently depended, were sometimes defensive in tone. More often they simply responded curtly to the main points in the petition or reiterated the reasons for the judge’s original sentence and for his consequent decision not to place the prisoner’s name among those selected for immediate reprieve."

Unlike the rather closed practices of the judges’ circuit letters and the Recorder’s Report, which have left little historical record, the Home Office judges’ reports provide a wealth of information on offenders and pardoning decision-making in later eighteenth- and nineteenth-century London. The judges’ reports were nonetheless still “hidden” transcripts, written in private between powerful people who did not expect the convict to ever see the documents. In this way, the judges’ reports differ from the petitions made by, or on behalf of, the offender (which were public transcripts, written by the powerless to the powerful and seeking to shine the light of public scrutiny on the authorities’ decision-making). 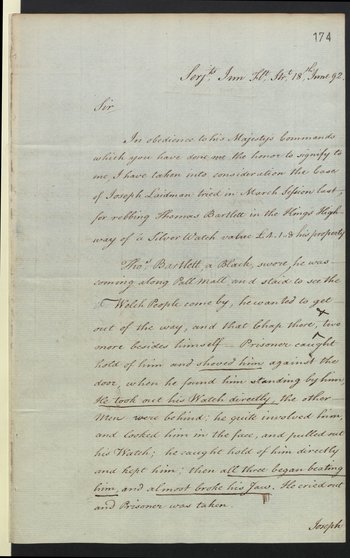 The Home Office judges’ reports on criminals were compiled following the trial, conviction and sentencing of offenders, as part of the pardoning process. They are here limited to cases tried at the Old Bailey, and should therefore link to several other sets of records included in this website that detail such trials and other aspects of the pardoning system.

Many of the reports were produced following a petition from the offender or their friends and family. Such documents might be found in the records of Petitions for Pardon 1797-1858. Correspondence relating to the pardoning process in such cases moreover might be found in the Home Office Criminal Entry Books 1782-1876.

The records of "Judges Reports on Criminals 1784-1827" included on this site provides a summary of every report arising from an Old Bailey case contained within the HO 47 files held at The National Archives.

Each record at the very least gives the name of the convict and a short description of the documents relating to the case. Most include a wealth of other information including the date of the trial, the offence, the sentence, a short summary of the grounds stated by the judge in favour or against clemency and the judge’s recommendation as to whether mercy should be granted, and if so then on what grounds. As such, the records often provide a great deal of information about Old Bailey convicts and their treatment by the courts that cannot be found elsewhere.

The records as reproduced here do not provide a full transcript of the (often lengthy) original judges’ reports held at The National Archives. However, through the links provided from the records, users can (via a Find My Past subscription) view images of these original reports to see the full details of the records.

The records of "Judges Reports on Criminals 1784-1827" included on this site (and even more so the fuller original records themselves) therefore present a wealth of information on Old Bailey convicts and pardoning decision-making. Yet they are also complex records. In particular, historians disagree about the extent to which the factors cited in the reports for or against mercy actually influenced pardoning decisions. Some are confident about this, and have counted the factors mentioned in the reports to assess which were seemingly the most influential.

Other historians, meanwhile, are less willing to take the grounds for clemency at face value. In being asked to write a report, the Recorder of London (or the trial judge, as the case may be), was by definition having their original sentencing decision questioned. Having decided, for example, to leave an offender to hang, the Recorder or judge was now being asked to justify and even reconsider that decision. And having been put in that position, judges were perhaps reluctant to put the Secretary of State or the king in a similarly difficult position by forcing a particular recommendation upon them. As such, judges perhaps took a diplomatic approach by citing a range of criteria both for and against mercy, thereby leaving the options open. This explains the often “cryptic” nature of the reports and suggests the problem of taking the criteria cited at face value.

In either case, the judges’ reports are complex documents that need to be treated with caution.

The original Home Office judges’ reports on criminals 1784–1830 can be found at The National Archives, Kew (London), under catalogue Reference HO 47.

A database of summaries of the all the records contained within HO 47 has recently been compiled by The National Archives Local History Research Group. That database, along with images of the original records, is available from Find My Past.

With the kind permission of The National Archives, the dataset used in this website is based on substantially restructured and reworked data from TNA's Discovery catalogue, pertaining to London convicts only. This dataset is available for download through the University of Sheffield Data Repository, figshare.