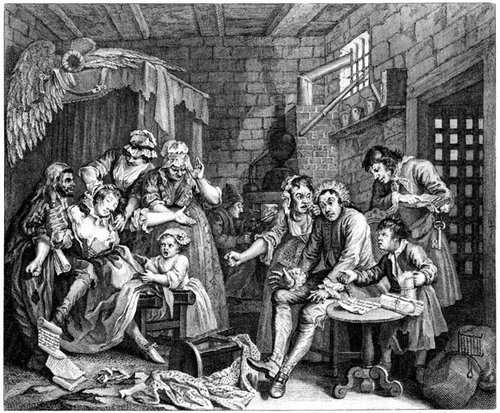 William Hogarth, "The Prison Scene", plate 7 from A Rake's Progress (1734). From Wikimedia Commons.

Imprisonment was rarely used as a punishment for serious crimes in early modern England. Over the course of the late eighteenth and early nineteenth century, however, the criminal justice system underwent a series of reforms that saw imprisonment become the chief form of punishment, establishing the penal system we recognise today.

Prior to the eighteenth century, gaols were commonly places where the accused awaited trial or punishment, following their sentencing to flogging, transportation or death, and were rarely seen as places of punishment or reform. Prisons including Newgate were notorious for their poor conditions and chaotic environment. Captain Alexander Smith wrote of the notorious gaol, "Newgate is a dismal prison. . . a place of calamity. . . habitation of misery, a confused chaos. . . a bottomless pit of violence, a Tower of Babel where all are speakers and none hearers" (Captain Alexander Smith, 1717).

There was no classification of inmates and hardened offenders would share their cells with first-time offenders, and the young and old, men and women, would share cells. The lack of supervision and regulation within prisons such as Newgate led to a chaotic environment. With no system of inspection, prisoners could intermingle, and they were subject to abuse by gaolers who would often make money from selling prisoners privileges, such as alcohol, and would take money from visitors who would pay to view inmates.

The dismal conditions of London’s gaols sparked renewed interest in imprisonment in the late eighteenth century. Transportation to America came to a close following the American Revolution in 1776, and the overcrowded population languishing in London’s gaols, together with disenchantment with corporal punishment, led to new ideas about the use of prisons to reform offenders from recidivist criminals to hard-working, respectable citizens. Jonas Hanway was one of the earliest prison reformers. In Solitude of Prison (1776), Hanway argued that solitude was the most effective model of imprisonment: "Everyone has a plan and a favourite system. Mine is solitude in imprisonment, with proper profitable labour, and a spare diet, as the most humane and effectual means of bringing malefactors who have forfeited their lives or are subject to transportation, to a right sense of their condition." (Hanway, 1776: 4).

The 1779 Penitentiary Act authorised the building of prisons with a regime of strict discipline and hard labour. No prisons were built immediately but the Act led to the opening of Millbank prison in 1816 which contained separate cells for 860 offenders and Pentonville in 1842, which housed had capacity to hold 520 offenders. 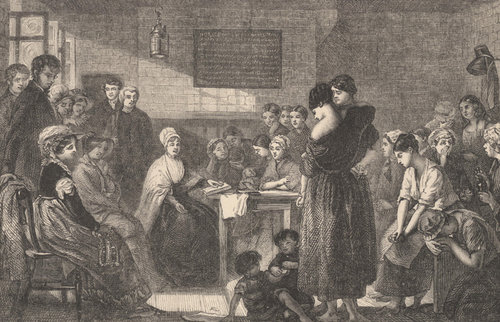 Thomas Oldham Barlow, after Jerry Barrett, Mrs. Fry reading to the Prisoners in Newgate, in the year 1816 (1816). From Wikimedia Commons.

Howard was one of a series of influential Christian prison reformers. Elizabeth Fry, who was commemorated on a £5 note, formed the Association for the Improvement of Women Prisoners in Newgate following her visit to the gaol in 1813. This led to the formation of a national network of female prison visiting societies where women prisoners attended classes on Christian instruction and "useful" labour including making clothes in order to prepare them for life outside the prison walls.

For reformers including Elizabeth Fry and John Howard, the rising crime rates proved that capital and corporal punishment had proved ineffective, and punishment should be directed at the mind and not the body. Humanitarian reform emphasised the role of discipline and order in the new prison regime. A daily schedule of hard bed, hard fare and hard work would "grind rogues honest" and encourage inmates to reflect on their wrongdoings. Historian Michael Ignatieff argued that the new penitentiary "was conceived as a machine for the social production of guilt", and that "one encounters the language of 'police', not 'humanity'" in the works of reformers such as Howard and Fry (Ignatieff, 1978: 213; 211). Michel Foucault, a critic of early religious penal reform, argued that the humanitarian reform movement was indicative of a new era in criminal justice as the penal state moved away from capital and corporal punishment - the spectacle of terror - to the age of confinement and discipline.

Utilitarian Reform and the Panopticon Prison

The new era of disciplinary power was typified by Jeremy Bentham’s designs for the Panopticon Prison (1787-1791). Bentham’s Panopticon was imagined as the "ideal" prison that would invoke self-regulation amongst the prisoners. The Panopticon was designed as a circular building with prisoners’ cells arranged around the outer wall and dominated by a central inspection tower. From the tower the prison inspector would be able to gaze upon the prisoners and monitor their behavior at all times. 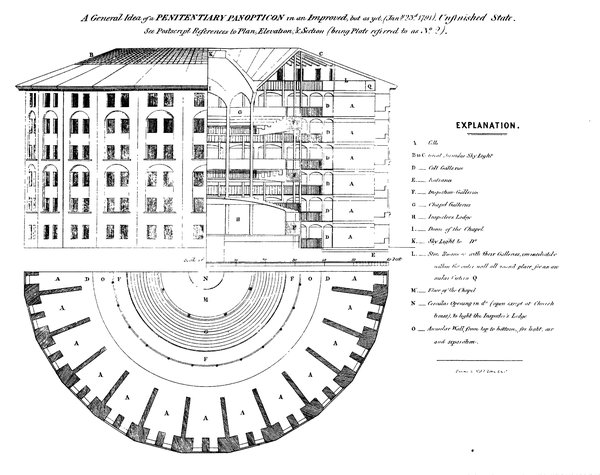 The central inspection principle, Bentham argued, would result in "morals reformed, health preserved, industry invigorated, instruction diffused, public burdens lightened...all by a simple idea in architecture" (Bentham, 1787). Under Bentham’s designs, the prisoners would not know when they were being watched by the gaoler so would internalize the system of discipline and regulate their behaviour. The Panopticon has become a metaphor for surveillance in modern societies and emphasizes power as manifested through the ubiquitous disciplinary gaze. "He is seen, but he does not see; he is the object of information, never a subject in communication" (Foucault, 1977: 201). This model of discipline continues to define contemporary society: "Our society is one not of spectacle, but of surveillance" (Foucault, 1977: 250). However, due to its escalating cost the Panopticon was never built, but researchers from the Digital Panopticon project have developed a three-dimensional model of the prison. 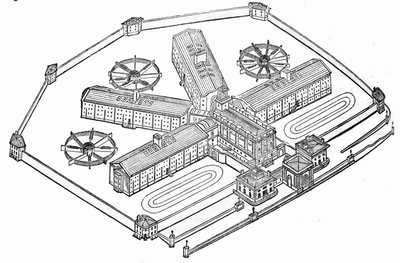 Many different places of incarceration for accused and/or convicted law-breakers were used between the eighteenth and twentieth centuries which are now included within the general, modern term "prison". This ranged from single-cell lock-ups or small gatehouses, to houses of correction (also known as bridewells), varying sizes of local "gaols"/"prisons" and the (usually large) "convict prisons".

Local prisons and houses of correction served the local courts, generally holding those sentenced to periods of imprisonment of up to two or three years, as well as those imprisoned for debt (until 1869). Such prisons were administered by the local authorities, but from the 1820s onwards the central government increasingly attempted to oversee the running of the prisons, eventually taking control over the local prison system with the Prisons Act 1877. Over the course of the late eighteenth and nineteenth centuries, many local prisons were closed down or amalgamated, and were steadily brought into uniformity.

Central government run "convict" prisons meanwhile were used for the long-term imprisonment of offenders, including penal servitude from the 1850s.

Local and central government authorities experimented with several different types of prison regime in this period.

In the early nineteenth century, many people called for (and some prisons implemented) the "silent" system of imprisonment. This involved maintaining the long-held practice of keeping prisoners together (increasingly grouped by the nature of the offender, the seriousness of their crime or whether they were a convict or being held awaiting trial), but enforcing strict silence at all times.

In the 1830s and 1840s, the silent system increasingly lost favour and was replaced instead with the "separate" system of imprisonment. In this instance, offenders were strictly separated from one another at all times, even to the extent of constructing chapels with partitions between each prisoner, and the use of masks to hide the convicts' faces from one another during exercise time in the yards. The separate system was based upon a strong belief at the time that prisoners could be reformed from their criminal ways by isolating the individuals from all corrupting influences.

In the 1850s and 1860s there was growing opposition to the separate system and to the policy of "reformatory" imprisonment in general. Prisons should instead, it was often declared, be places of severe labour and exercise a deterrent influence on would-be or current offenders. In an attempt to make the prison experience more uniform and severe, in the mid-1860s the "progressive stage" system of imprisonment was introduced. The first three months were served in conditions of hard labour, and progress to the higher classes (with easier labour and more privileges) would take place by earning marks for good conduct. In this way, it was hoped that obedience would be instilled and bad conduct severely punished.

Prison reform continued throughout the latter half of the nineteenth century, and into the twentieth, and steadily grew to concern not just about penal theory but also concern for the well-being of inmates too. Up until the end of our period (and long after) the English prison system incorporated many of the ideas that had typified earlier regimes. For example, convict prisoners from 1870-1900 (both male and female) would spend the first nine months of their penal servitude in the "separate" and "silent" systems, kept apart from the main prison population, expected to move around the prison in silence, and forced to spend long periods of isolation in their cells. After this period they would join the main prison population, and be assigned prison labour. For male prisoners, this often remained the hard physical labour pioneered in the 1850s and 1860s such as stone breaking, quarrying or building on public works. Punitive tasks to punish the body and occupy the mind continued to be a prominent feature of local imprisonment also. Although the separate system was abolished in 1922, it was not until the 1948 Criminal Justice Act that further significant reform was made to the prison system. 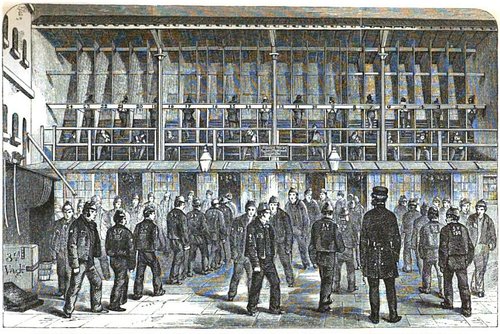 "Prisoners Working at the Tread-wheel, and Others Exercising, in the 3rd Yard Of The Vagrants' Prison, Coldbath Fields", in Henry Mayhew, The Criminal Prisons of London (1862). From Wikimedia Commons.

The history of imprisonment and reform has not followed a clear, progressive trajectory, but has been subject to lurches in criminal justice policy that continue today. Historians of nineteenth-century offenders continue to point to the inefficacy of prison as a way of reducing recidivism. Prisons are often seen as houses of incarceration rather than rehabilitation, and you can examine the effects of imprisonment on the lives of offenders by interrogating the Digital Panopticon’s Records.

For detailed sources on imprisonment included on this website, see

This page was written by Zoe Alker, with additional contributions by other members of the Digital Panopticon project team.