The Digital Panopticon and AS-Level and A-Level History 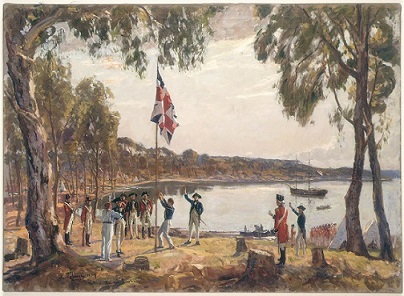 At AS/A-Level, the historical themes explored by the Digital Panopticon website are probably at their most compatible with syllabuses which explore British imperial history, such as the EdExcel A-Level paper, ‘Britain: Losing and Gaining an Empire, 1763-1914’ - specifically in relation to the section, ‘The Birth of British Australia, 1788-1829’. This asks students to consider the institutionalisation of the penal system in Australia; the impact of this system on the indigenous populations of Australia; and the extent of British colonial control by 1829. This page highlights some of the resources available on the Digital Panopticon website which allow students to explore the history and legacies of British imperialism in Australia. These resources include two new education videos on the history of convict transportation from Britain to Australia.

The Institutionalisation of the Penal System in Australia 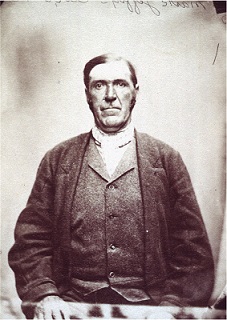 The historical background page on 'Transportation' is a good place for teachers and students to start researching this topic. The Digital Panopticon team have also produced two educational videos which explain different aspects of convict transportation to Australia and the institutionalisation of the penal system. The first deals with ‘The Statistics of Convict Transportation’ and the second analyses ‘The Changing Frequency of Convict Transportation’ in the eighteenth and nineteenth centuries. These videos are a useful tool for introducing students to these topics. They can also be used as revision aids.

Classroom activity 2: Divide the class into small groups. Give each group a Digital Panopticon visualisation to analyse. What do these visualisations tell historians about the social composition of convicts transported to Australia? How old were they? What types of crime had they committed? What were their religious affiliations? Once groups have analysed their visualisations, the teacher can lead a broader class discussion about these themes.

Classroom activity 3: What is a Convict Love Token? You can view a National Museum of Australia exhibition here. Ask students to choose the life of a convict transported to Australia. Then as individuals or in groups, ask them to design a love token for their chosen convict. What are the key people, places and life events that would illustrate the life of the convict they have selected?

The Impact of Transportation on the Indigenous Populations of Australia

The impact of the establishment of transportation in Australia on Aboriginal communities is one of the most controversial and sensitive issues that teachers can tackle with students in the classroom. Although this is complex historical terrain for teachers to negotiate, there are few educational resources in the UK which directly address these issues. Consequently, teachers may find the Digital Panopticon historical background page on, 'Convicts and the Colonisation of Australia, 1788-1868' helpful.

It is difficult to cite accurate population numbers of Aboriginal communities during this period owing to a lack of administrative records documenting these communities. However, Bain Attwood has suggested that in 1788, the Aboriginal population most probably numbered between 750,000 and 1.25 million (Attwood, 2000: 158). By 1900, this figure was reduced to around 75,000. The public discussion of this rapid decline in population numbers has become highly politicised, particularly in Australia. 'The History Wars' have revealed deep division over how historians, politicians and members of the public perceive the penal past. Aboriginal scholars and politically left-leaning historians tend to view the violent settlement of Australia and the dispossession of indigenous lands as 'genocide'. By contrast, conservative commentators, such as the writer Keith Windschuttle, whose views were defended by former Australian Prime Minister, John Howard tend to downplay the role of the British imperial system and the extent and intent of convict and settler acts of violence. Instead they point to the role of disease and dislocation in contributing to the depletion of the indigenous populations of Australia. Historians who emphasise the negative aspects of genocide and frontier violence towards Aboriginal communities in Australia's history are sometimes derided by their critics as presenting a "black armband" perspective, while those who focus on the positive are criticised for offering a "white blindfold" view of Australia's past. Addressing these polarities in the literature, Genocide Studies scholar Dirk Moses has argued that it is historically and ethically important to acknowledge the genocidal impact of the colonial government and forms of settler violence on the decline of Aboriginal communities, whilst also recognising that disease, malnutrition, inter-tribal warfare and a decreased birth-rate were also key factors in the extent of the Aboriginal demographic disaster (Moses, 2000: 89 - 90). 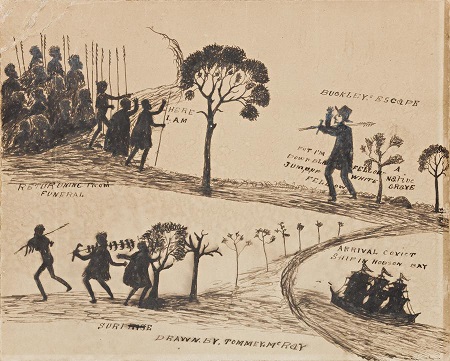 Conflict over land use was often the motivating factor in cases of frontier violence between settlers (both free and convict) and Aboriginal communities. Settlers often wanted to use the land for grazing sheep and cattle. Aboriginal people used the grasslands flora for food and practised indigenous traditions such as complex land burning patterns. When the flora was destroyed, Aboriginal people sometimes hunted the sheep and cattle associated with settler communities. This often led to harsh retributive violence by settlers. There were also instances of indigenous massacres of whites. For example, at the Faithfall Massacre in north-eastern Victoria (11 April 1838), eight convict or ex-convict stockmen were murdered (Rogers and Bain, 2016: 84 - 86). Moses has pointed to the centrality of the military concept of 'counter-insurgency' in comprehending the psychology of white settler violence, whilst condemning escalations in persecution and brutality towards Aboriginal civilians, including men, women and children (Moses, 2008).

Perpetrators of violence against Aboriginal people included convicts, free settlers and members of the mounted police force, the latter particularly in the Northern Territory, South Australia, Western Australia and Queensland (Rogers and Bain, 2016: 85). One of the most notorious atrocities committed against the Aboriginal people was the Myall Creek Massacre of 10 June 1838 in New South Wales. A group of stockmen, including convicts, former convicts and a settler massacred at least 28 members of the Wirrayaraay people. Seven settlers were hanged by the colonial administration for their participation in the massacre on 18 December 1838. This was a rare instance of the law being used to punish frontier violence towards Aboriginal people during this period.

The concept of genocide is an important idea for student discussion of this difficult history. The UN's definition of the crime of 'genocide', adopted in 1948, is: "any of the following acts committed with intent to destroy, in whole or in part, a national, ethnical, racial or religious group, as such: killing members of the group; causing serious bodily or mental harm to members of the group; deliberately inflicting on the group conditions of life calculated to bring about its physical destruction in whole or in part; imposing measures intended to prevent births within the group; [and] forcibly transferring children of the group to another group."

Scholars who dispute the genocide claim point to the difficulties of proving a cohesive plan of British government intent to cleanse Australia of its indigenous people. They also often object to the 1948 legal term of 'genocide' being imposed retrospectively on nineteenth-century history. By contrast, Thomas James Rogers, Stephen Bain, Benjamin Madley and Tom Lawson have made the case that genocide did occur in Australia in this period. Whilst also discussing other instances across Australia, all of these scholars point specifically to the case of Tasmania, where a large number of convicts were sent. In relation to the treatment of Aboriginal communities in Tasmania, Rogers and Bain have suggested that, "Colonial government policy relating to Aboriginal Tasmanians went through three stages: concilation, removal to specific regions, and finally deportation from the main island." (Rogers and Bain, 2016: 88) Equally, Madley uses historical examples of perpetrator testimony, massacres, sexual violence and instances of the colonial state's failure to prosecute perpetrators in order to evidence the claim that a genocide did occur against Aboriginal Tasmanians in the period 1803-1847 (Madley, 2008: 104-106).

Finally, some Aboriginal people arrested on the New South Wales frontier were subsequently incarcerated in the colonial penal system. By the 1840s and 1850s, these Aboriginal people were primarily imprisoned on Cockatoo Island in Sydney Harbour. The high rate of Aboriginal deaths in custody resulted in an official investigation in December 1850 (Maxwell-Stewart, 2012).

Whilst it is important to acknowledge this past, community relations were far from just a history of incarceration and violence. There were many ways in which convicts, settlers and Aboriginal communities informally fraternised with each other including participating in unregulated trade, communal drinking, casual or long-term sexual relations and Aboriginal assistance to escaped convicts. One of the most famous instances of the latter is the story of William Buckley (1780-1856). In 1803, Buckley absconded from his incarceration at Port Philip. He was discovered by the Wathaurang tribe, who believed him to be a reincarnation of their tribal leader. Buckley took an Aboriginal wife, adapted to the tribe's language and traditions and ended up living with the Wathaurang for approximately thirty-two years.

Here are some suggested activities for dealing with this topic in the classroom.

Classroom activity 1: 'The Founding of Australia'? In a teacher led discussion analyse the Algeron Tarnage oil sketch reproduced on this page. What and who is represented in this image? Who is excluded from this image? What does this image tell us about Tarnage's attitude to the British Empire? Is this an accurate historical depiction of the British settlement of Australia? What then, is the significance of this image? How does the style of the Tarnage image compare to the work of Aboriginal artist Tommy McRae? (McRae's image, 'Buckley's Escape' is also featured on this page).

The Extent of British Colonial Control by 1829

The Digital Panopticon website does not specifically address the extent of British colonial consolidation in Australia by 1829. However, the Digital Panopticon's historical background page on 'Australia, 1787-1901' can contribute to students developing a broad perspective on Australian history in the period 1780-1925.

Pearson have produced a student activity book that accompanies the teaching of 'Britain: Losing and Gaining an Empire'. The Australian Government has some useful information pages on 'Convicts and British Colonies in Australia'. Information and primary sources on Convict Transportation, the Myall Creek Massacre and the Black Line are available from The National Museum of Australia. For a concise and enlightening analysis of 'Australia's Convict Myths', see Deborah Oxley and David Meredith's article in BBC History Magazine, Australian Edition. This was published in March 2016.

Digital Panopticon PhD student, Emma Watkins has developed a set of activity sheets which show secondary school students how to use records linked in the Digital Panopticon website to reconstruct the personal histories of convicts transported to Australia. Follow this link to find out more and access the computer based classroom activity 'Using Digital Records to Reconstruct the Lives of Transported Convicts'.

We would like to get in touch to find out how you are planning to use these teaching resources, and to ask you for your feedback.