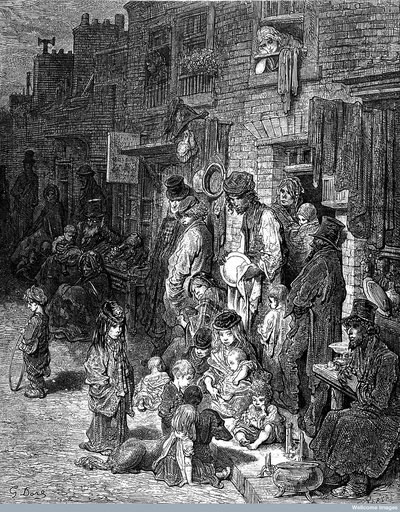 To what extent were the lives of the children of convicted criminals shaped by their parents’ offending history? Evidence about the convicts contained in the Digital Panopticon's linked datasets can help answer this question. Contemporary research confirms that the children of convicted criminals today have a significantly-elevated risk of conviction (Williams and Godfrey). There is also considerable historical evidence that this has been the case in the past. In seeking explanations for this, most emphasise the importance of socio-economic pathways over genetic. Many researchers point out the extent to which conviction histories cluster in families suffering from sustained intergenerational financial and/or socio-cultural deprivation (Bijleveld and Wijkman).

As the factors that influence offending are also broadly associated with poverty and other societal measures of disadvantage, it is often difficult to disentangle familial from environmental influences. Thus, if the children of prisoners were raised in similar environments to that experienced by their parents, it is difficult to determine the extent to which their history of interaction with the courts can be attributed to parental influence (or inheritance) or the general circumstances associated with early childhood disadvantage. The study of transported prisoners offers opportunities to shed new light on intergenerational transmission mechanisms since the children of convicts born in the colonies were exposed to different environmental conditions to those that characterised their parents’ infancy.

Intergenerational life-course histories are also of interest to economists and historians of health for related reasons. Like crime, there are several mechanisms that may or may not be responsible for shaping the health outcomes of both parents and their children. This can include environmental and genetic factors and (to complicate things further) interactions between the two — sometimes referred to as epigenetics. There is some evidence that effects associated with trauma exposure, for example, can be transmitted from one generation to another through the chemical coating of chromosomes (Kellerman, 2013). The ability to reconstruct cradle-to-grave profiles for thousands of individuals who ran foul of the courts in the nineteenth century, some of whom were transported to Australia and some not, is thus of potential interest to a broad spectrum of researchers studying the mechanisms responsible for perpetuating intergenerational inequalities. 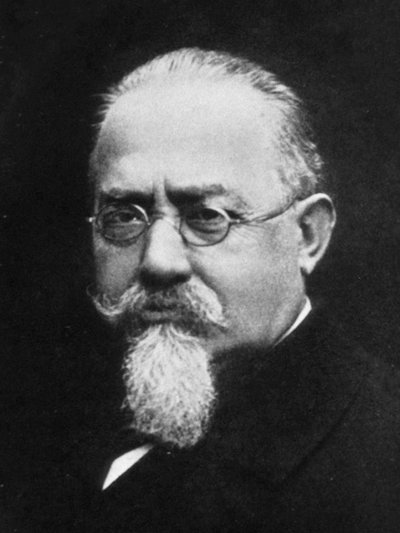 The Transported and Transmission

The extent to which the legacies of transportation helped to shape lives in settler Australia has been subject of considerable discussion. There were many in the Australian colonies in the second half of the nineteenth century who thought that the progeny of those who had "left their country for their country’s good" made poor citizens. As one prominent settler argued, if a free colonist married, "his family produces wealth to the state", but, by contrast, convict families produced "an equal degree of evil" (Henderson, p. 33).

By mid-century, it was common to see convicts as a source of contamination who could spread criminal vice to others — especially their offspring. Transportation, it was said, led to the "transmission from parents to progeny of depraved habits and felonious proclivities" (Bathurst Free Press and Mining Journal 1889). Thus, even before the works of the Italian criminologist Cesare Lombroso appeared late in century, it was common for both colonial and metropolitan observers of crime to claim that deviant traits could be passed from one generation to another.

Despite the considerable influence of the eugenics movement in Australia, attitudes to convicts and their impact on colonial society began to change in the first half of the twentieth century (Roberts). This reflected a sense of relief that Australian troops had not been found wanting in overseas conflicts — an outcome that for many proved that convict genes had either been effectively washed out by subsequent migration or that transportation had not resulted in permanent ill-effects. In more recent years, others have argued that there is little evidence that transportation led to increases in crime rates or other long-term societal disadvantage (Braithwaite). The opportunity for a fresh start in Australia, it is thus argued, broke Old World cyclical disadvantage — although the manner in which forced migration and hard labour might have paved the way for subsequent intergenerational success is poorly explained.

The careful piecing together of life-course histories for transported and non-transported prisoners, as well as their children and grandchildren, is a considerable undertaking — although the scale of the task is somewhat eased by the quality of the available data. In the case of Australia, small colonial population sizes also help. This is particularly the case for Van Diemen’s Land (Tasmania) — an island with good departure records and civil registration data. Tasmania also has a comprehensive series of criminal justice records covering the post-transportation period.

From the 1850s onwards, every Australian colony published a version of the British Hue and Cry. These police gazettes differed from their British model in that they routinely printed descriptions of discharged prisoners. Amongst the identifying details contained in these notices are information on place and year of birth, height, ship that brought an individual to the colony and details of the offence for which the prisoner had been convicted. This information is useful in that it can be used to track recidivism rates for former convicts arrested long after they had served out their sentence of transportation, as well as the proportion of offenders who had arrived free or been born in the colonies — for more on this see the Recidivism page. 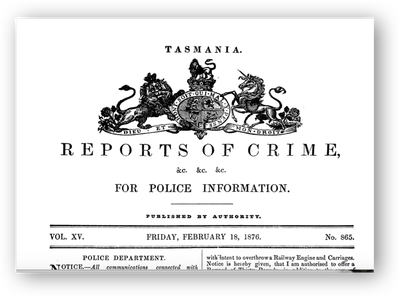 The linking of descriptions of Tasmanian-born prisoners (for whom over 23,000 discharge notices were circulated in South Eastern Australian police gazettes between 1865 and 1926) to Tasmanian birth registers enables researchers to place offenders within the household of their birth. Through this process it is possible to reconstruct information about rates of colonial intergenerational offending. Early results suggest that the children of transported convicts were not at significant risk of multiple incarceration (Maxwell-Stewart, Inwood and Stankovich, 2015).

The police gazettes are also useful in that they record the stature of offenders. Analysis of the heights of prisoners born in the period 1840-1899 suggests that Tasmanians grew up taller than children born in the colony of Victoria. This is in itself something of a surprise. Victoria boomed after the discovery of gold in 1851. For much of the rest of the nineteenth century, per capita income was significantly higher than Tasmania. One possible explanation for this is that food prices remained relatively lower in Tasmania, enabling households to maintain a better diet despite their relatively impoverished circumstances. It is also possible that slow economic growth protected Tasmanians from some of the more pernicious side effects of rapid urbanisation, including deteriorating water quality and a rise in associated childhood diseases. Broadly speaking, there is little evidence that the legacy of transportation impacted negatively on the biological development of the Tasmania population as a whole, despite the fact that it received more convicts per head of population than any other colony.

What is more surprising still is that prisoners born to convict mothers were on average taller than other colonially born prisoners (adjusting for year and place of birth within the colony). It is possible that this is the product of the small size of convict families — itself an artefact of the way in which female convict sexuality was policed. As convicts were generally not permitted to marry until the bulk of their sentence had been served, they tended to start families later in life than most couples. This had fertility implications. As the families of former convicts tended to be small, it is possible that more resources were available per child (Maxwell-Stewart, Inwood and Stankovich). Certainly, other research suggests that some of the secular rise in height in the second half of the nineteenth century can be explained by declining family size (Bailey, Hatton and Inwood). 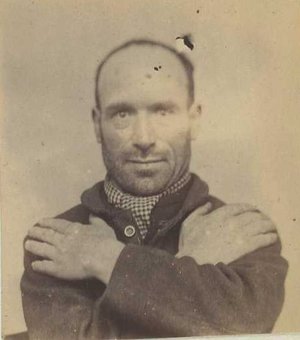 In summary, whereas the restrictions placed on the private lives of female convicts was one of the more pernicious aspects of transportation, government policy may have had unintended outcomes. Suffice it to say that there is little evidence that the children of transported convicts were caught in intergenerational poverty traps, although further research may reveal different outcomes for those who were born to mothers still under sentence and raised in orphan schools and other colonial institutions.