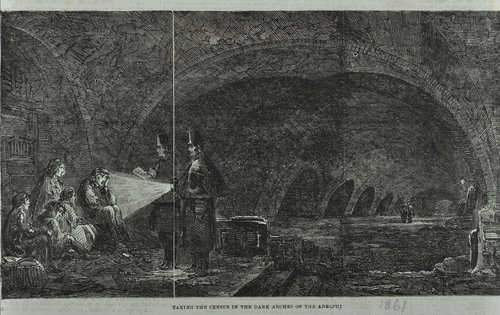 [Anonymous], "Taking the Census in the Dark Arches of the Adelphi", from The Illustrated Times (1861). Collage, record number 308495. © London Metropolitan Archives.

Beginning in 1841, the census returns for England and Wales collected personal and demographic information on the entire population every ten years. Though census collection is ongoing, census returns are subject to a 100 year closure. As such only the returns from 1841 through to 1911 are available for the public to view. All of our offenders alive in 1841 should appear in at least one census entry.

Following earlier attempts at measuring the British population in 1821 and 1831, the first "modern" census was taken in 1841 and collected a "snapshot" view of the UK population on behalf of the Office of National Statistics. Census returns contain information collected on just a single night (usually falling within March or April) once every decade.

Information on the census forms were collected in two main ways – forms were filled out by the heads of institutions such as workhouses, asylums and prisons on behalf of their inmates, or for the general population by enumerators who visited a designated area on census night and collected information from residents.

For each individual the 1841 census recorded their place (location), name, age, sex, profession or trade and whether they were born in the county of residence or in "Scotland, Ireland, or Foreign Parts".

From 1851 up to and including the 1901 census, the returns began to follow a common administrative pattern, recording more detailed information for everyone - their address, name, relation to the head of the family (wife, son, daughter etc. but also lodger, boarder, visitor, inmate etc.), their marital status, age, sex, employment or profession, place of birth and whether they were "blind or deaf and dumb".

In 1911, the census changed again, removing some of the ambiguity of previous years. Each household was given their own form to "self report" information, and further criteria were added, including "particulars as to marriage" and further details on their present occupation, and their nationality.

The rich detail in census records enables them to link easily with most other sources that contain at least a name and year of birth. The more detailed the record to which the census entry links, the higher the likelihood of a true match. As such, records like the UK Licences for the Parole of Convicts 1853-1925 which provide not only name and date of birth, but details of next of kin, place of birth, residential address and occupation, allow some of the best matches with census records. Likewise the Old Bailey Proceedings 1740-1913.

The census can also provide valuable links to those transported in later years to Van Diemen’s Land (Tasmania) and Western Australia. Names, birth years and, importantly, place of birth can help link census entries to the Convict Indents (Ship and Arrival Registers) 1788-1868 and VDL Founders and Survivors Convicts 1802-1853.

It is possible to link the census with criminal records that contain only name and date of birth such as Prison Registers 1770-1951 and Hulks Registers 1801-1879. However, accurate links between these records becomes difficult if a convict carries a common name such as "John Smith". The census may contain thousands of John Smiths born in 1840, and with little other identifying information in criminal registers to differentiate between them, the chances of false matches are high. 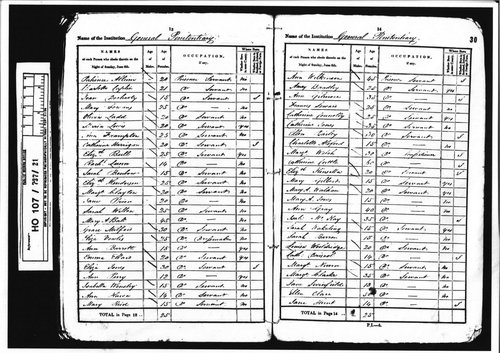 The census is one of the most important sources available for learning about both the broad population of England and Wales and about individuals and their families. The census provides us with civil information on everyone, regardless of rank or location. Census entries offer us information on ordinary people which is not always available in criminal records, namely residential addresses, place of birth and familial relationships.

However, researchers must remember that the census is neither complete nor entirely accurate. Though the census returns are very nearly complete, there is no way of knowing which individuals were not recorded. Individuals, households, buildings and even entire streets have been shown to be missing from certain census years. There was particular difficulty in recording those who had no fixed abode or who moved around frequently in casual lodgings.

Accuracy is also not guaranteed for the census returns. Inaccuracies and inconsistencies initially crept in at the original information collection stage, as enumerators made mistakes or false assumptions in their record creation, or as suspicious or unsure householders gave incorrect information about their circumstances.

The information requested by the census returns was also ambiguous. Until 1911, for example, it is not clear if information on "profession or occupation" recorded current occupation at that time or predominant employment experience of each individual. Likewise, the interpretation of both enumerators and householders played an important role in the level of information recorded. For example, birthplace to one respondent might mean town, and to another county or only country.

A second stage at which low-level errors and inconsistencies have entered census data is in the transcription of the original documents into their modern, digital (and searchable) format. Small mistakes in names, places and ages may prohibit a successful search or link to a recorded individual.

The original census returns are held by the National Archives at Kew (London) though they are not available for public use. All of the returns have been digitised. The images and accompanying transcriptions for each census year to 1911 are available to search for free at the National Archives and a number of Libraries and Archives around the UK. Images and transcriptions for the census are also available online via subscription sites like Ancestry and Find My Past.