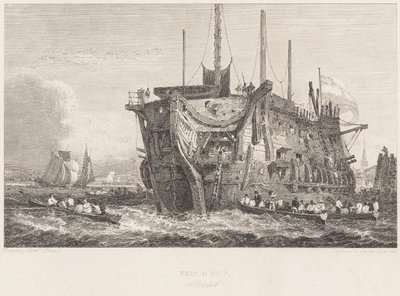 As explained in Convict Hulks, incarceration in the hulks - prison ships moored in rivers and estuaries - was a major feature of the punishment of felons between 1776 and 1857. The extensive lists of prisoners in hulks provide very useful evidence when charting the penal journeys of convicts, and later registers provide detailed evidence of their personal characteristics.

The hulks were run by private contractors, who were paid by the Treasury, on condition that the contractors provided regular returns listing the convicts on board. The primary purpose of these records was to ensure that the prisoners were properly kept track of, and that contractors were correctly paid.

There are four overlapping classes of records, each from a separate class of records at The National Archives. Records were kept separately for each hulk.

The "Prison Hulk Registers 1801-1849" provide the convict's age, the offence they were convicted of, when and where they were convicted, the date received on the hulk, and what happened to the prisoners following their discharge: whether they were sent on board a transport ship, pardoned, discharged, escaped or died on the ship. In addition to the name of the ship, the records indicate where it was moored. The index to the records also has "character from gaolers". However, most of this information is not displayed on this website (see below). 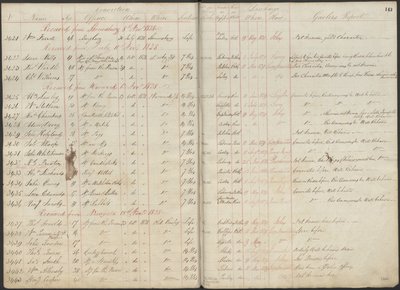 The "Hulk Treasury Registers 1802-1817" were kept by the Treasury to ensure contractors were correctly paid for the number of convicts kept on the hulks, and reimbursed for other expenses. The records are organised by hulk, and list both members of the crew and convicts, though only the latter are included in this website.

Each entry only contains the name of the convict, their ship and the date. The principal value of this record series is that it contains much earlier records than most of the other hulks registers.

These document 17,644 prisoners held on the hulks Cumberland, Dolphin and Ganymede. The amount of information provided varies by ship, with the later registers being most detailed, but at their most complete the registers provide: date and place of conviction and sentence; age and where the convict was born (town/county); hair and eye colour; description of eye brows and lashes, nose, mouth, complexion and visage; height (ft, inches); make (slender, mid or stout); trade or profession; whether married or single; whether they could read and write; when and how they were discharged (usually to a transport ship); reports of their character (including whether they had previous convictions, but without details); and information about where the convict's relatives lived. A column for "Remarks" provides information about distinguishing physical features such as "High cheek bones. Upper part of the head inclined to the right. Tear on both sides of the face from scurvy." Descriptions of tattoos are sometimes provided. Much of this information, however, is not displayed on this website (see below).

The "Hulks and Prisons Quarterly Returns 1824-1879" includes quarterly returns to the Home Office (required by 5 Geo IV, c.85, s.14), containing lists of the convicts held on convict hulks until 1861, and, from 1848, in convict prisons. Those held in Criminal Lunatic Asylums from 1862 are also included.

For each convict, information is provided about name, age, offence, conviction details and length of sentence, bodily state (good, infirm, lame, epilepsy, podagra [gout], etc.), behaviour (good, indifferent, bad, very bad, suspicious) and why and how they were discharged from the ship. Information on behaviour was not kept for convicts who had spent less than three months on board. Much of this information, however, is not displayed on this website (see below).

Convicts serving time on the hulks may have been convicted at the Old Bailey, and therefore be found in the Old Bailey Proceedings 1740-1913, though many were convicted in other courts. Since the hulks by themselves were not a separate type of punishment, the convicts' actual sentences were to a period of transportation or imprisonment. They may therefore be found in the records of these punishments, though it is important to bear in mind that the actual punishment received was not always the one sentenced. 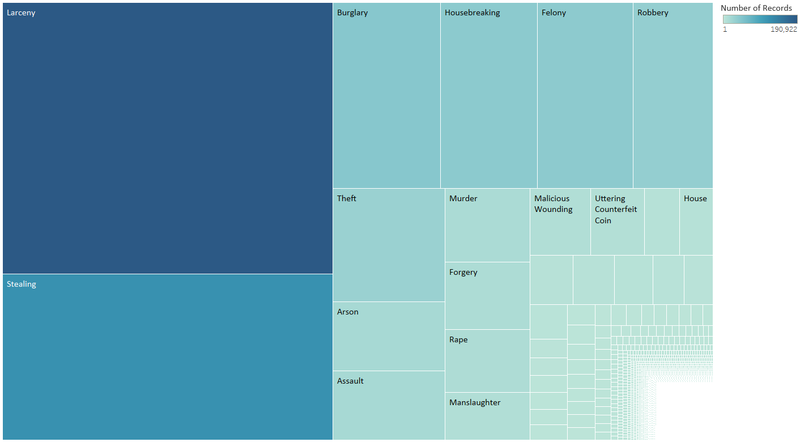 Categories of offence most frequently recorded in the "Hulks and Prisons Quarterly Returns 1824-1879". © Digital Panopticon.

Since the information provided is often limited, these records are best used in conjunction with other records. The major strength is that they tell us what happened to convicts following their conviction at the Old Bailey, accounting for the gap between the trial and embarkation of a convict ship, if they were actually transported. If, having been sentenced to transportation, they were not transported, these records can tell us why. The same applies to those sentenced to imprisonment or penal servitude.

Because records were kept separately for each hulk, however, the information provided varies by ship. Some later records provide valuable detailed information about the personal characteristics of convicts. Some of the hulks officials were therefore pioneering in their recording of such personal information.

For two reasons, this website does not provide access to the full content of these records. First, not all categories of information have been transcribed. Second, licensing conditions restrict what we are able to display. To see the full content of these records, you either need to go to The National Archives, or to the relevant Ancestry or Find My Past website as indicated below. While these resource providers have not transcribed all available information, they do provided digitised page images which can be consulted.

Hulk Treasury Registers 1802-1817: the original records, under the classification T 38, are kept at The National Archives. They can also be viewed online via Find My Past (subscription needed).

Hulk Registers (Cumberland, Dolphin, and Ganymede only) 1818-1839: the original records, under the classification ADM 6, are kept at The National Archives. They can also be viewed online via Find My Past (subscription needed).

Hulks and Prisons Quarterly Returns 1824-1879: the original records, under the classification HO 8, are kept at The National Archives. They can also be viewed online via Find My Past (subscription needed).