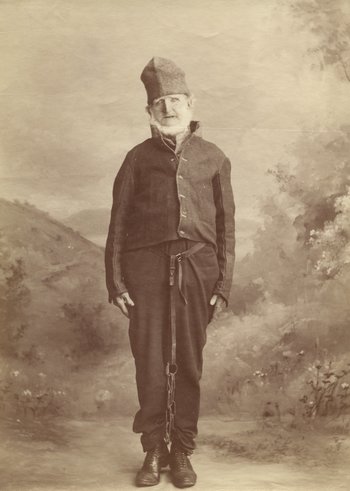 The "Van Diemen's Land Convict Labour Contracts 1848-1857" dataset included on this site is an (incomplete) listing of employment agreements registered under the Probation system in Van Diemen’s Land (now Tasmania) with records drawn between 1848 and 1857. They provide details of the terms on which convict "Probationary Passholders" were engaged to work by private and public employers. Both male and female convicts and employers are included.

The end of Assignment

How convict labour was used in the colonies changed in 1840 as a result of two, almost contradictory pressures. First, British law reform was again retrenching the death penalty, this time for some of the more serious offences. This meant cranking up the severity of its key alternative, making penal transportation more dreaded. Convicts in the colonies were thenceforth subjected to more severe and regimented systems.

Second, abolitionist thought gained traction during the 1830s. Penal transportation came under attack as akin to slavery because of the practice of assigning convicts to work for private masters who took on the role of managing and maintaining convict servants in exchange for labour rights over coerced workers. Assignment was deemed "a giant lottery" whereby good convicts might be allocated to bad masters who behaved capriciously (and vice versa), and while a master could return a convict servant, a convict could not fire their master (for an example of this discourse, see William Ullathorne, The Horrors of Transportation (1838)). Transportation was symbolically ended, but only to New South Wales. Assignment was however replaced largely to obviate public disquiet, but transportation continued (and expanded) to Van Diemen’s Land.

The introduction of Probation

The new system of convict management was called Probation and it lasted from 1840 until 1857. It was very much crafted in accordance with new penal thought. It graded convicts by their crimes and structured reform by requiring progression through stages, before ultimately earning freedom. Carrots and sticks were used in even measure. Under the Probation system, first, male convicts spent time in a Probation Gang heavily supervised and engaged in hard labour on infrastructural development, such as roads; women spent a shorter time of six months in the Female Factory or on the Anson hulk in Hobart Harbour. Convicts were familiarised with colonial needs and inculcated with the local work ethic. For men, the duration of this initial stage was governed by original sentence length (e.g. a seven-year sentence meant 18.7 months on the gang; a 14-year sentence meant 26 months), and made variable according to colonial behaviour.

Stage two saw convicts leave the gang and become Probationary Passholders, entitled to work for payment, which offered a significant incentive. The duration of the passholder phase was again variable and convicts who easily fell foul of the many "status crimes" to which they were subject, would have their progress delayed or even be returned to the gang. Beyond Probation, the third and final stage was inching towards liberty. Good behaviour could accelerate progress, which might involve a convict being granted a "Ticket-of-Leave" for the rest of their sentence (enabling convicts to work "on their own hands" for whom they picked, but requiring regular reporting and constraint on movement, with the threat that a "Ticket" could be rescinded). Early release might be granted through a "Conditional Pardon" (greater freedoms bar leaving the colony, and a conditional pardon could not be revoked). For all convicts, time played its part, and a "Certificate of Freedom" was obtained at the expiration of their sentence.

It was stage two – when convicts were "Probationary Passholders" – that created the "Convict Labour Contracts". Like "Assignment", most convicts would end up working for private employers, but unlike on assignment, convicts would be paid a wage. This was not a market wage (something considerably below – these were coerced workers) but a notable incentive, all the same, and usually a relief from hard labour on a gang. 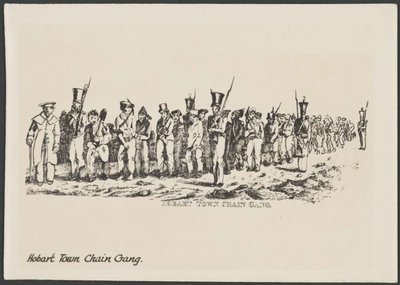 Furthermore, the working relationship was governed by a fixed-term contract negotiated between the colonial government, private employer and convict passholder. Any of the three parties could terminate the contract, under specific guidelines (e.g. employers had to give 10 days’ notice or 10 days’ pay; passholders could appeal to the Comptroller-General to leave). Convicts could refuse any or all offers of employment. Wages were to be paid to convicts, both monetary and in kind. In the original system of 1840, contracts ran for a minimum of one month to a maximum of one year; wages were fixed at £9 per annum for a male convict, and £7 per annum for a female convict; rations and clothing were specified; and health cover provided. Employers complained about the increased costs compared with "Assignment" and the new-found bargaining power of convicts, who could walk when a contract expired (and frequently before) looking for a better deal, which likely included over-payments and perks, or a job closer to town.

In 1844, during economic crisis, money wages were made flexible. The expectation was that wages would fall, but subsequent economic recovery meant wages in fact rose. An overhaul of the system in 1847 curbed convict power and benefits and accelerated the supply of labour to the private sector. It was decided that convict women no longer need spend six months under "Probation", and were instead released straight into private employment. Employers could end a contract without warning, and no longer had to maintain a convict who was hospitalised or sick. Convicts could not refuse a contract "at a reasonable wage" (defined as £7 per annum), nor refuse to be rehired by the same employer, nor terminate a contract without lodging a formal police complaint about their treatment which, if their case was not found, would make them liable for punishment. The contract paperwork was simplified to a "Register of Employment".

Lt Governor Denison was upbeat, telling Earl Grey, Secretary of State for the Colonies, that the effect of the changes "has been to diminish the work of the clerks in the offices, and at the same time to secure a more efficient control over the convict; to remove a variety of evils and abuses, and to make the whole system better for the convict and the settler, and more satisfactory to the Government" (Denison to Grey, 5 Dec. 1847, CO 280/215, The National Archives, London). Comptroller-General Hampton wrote that this meant the

"cumbrous and unsatisfactory labour of registering, arranging, and filing contracts is now unnecessary; weekly extracts from the registers kept at the different hiring depots and police offices are copied into a set of books in this office, containing a list of authorised employers, with the pass-holders in the service of each, and a separate register of these passholders...the whole checked periodically by the employers half-yearly returns..." (Report by Hampton, May to Oct. 1847, enclosed in Denison to Grey, 5 Dec. 1847, CO 280/215, The National Archivs, London).

The "Register of Employment of Probation Passholders" was arranged by employer and included, in tabulated form, the following information:

The "Register of Convicts Hired by Private Employers" was arranged in chronological order based on contract date, listed by convict. Also in tabulated form, it included: 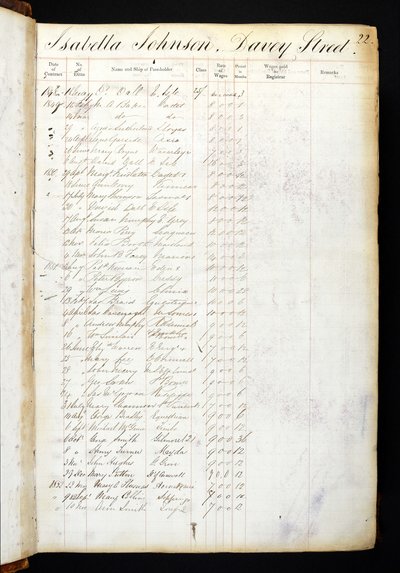 The "VDL Convict Labour Contracts 1848-1857" records comprises 27,049 registered contracts drawn from just two registers: one volume of the "Register of Employment of Probation Passholders" for the years 1848-1857 (17,997 contracts, just over one-third involving female convicts) and one volume of the "Register of Convicts Hired by Private Employers" for the years 1850-1852 (a further 9,052 contracts, all for male convicts).

Largely inaccessible to genealogists in the original form (CON 30 is organised by employer), the computerisation of the record enables searching by convict name and ship. "Convict Labour Contracts" offer the rare ability to trace who a convict worked for, any convict colleagues working alongside, when they were so employed, for what rate and on what terms. They can be used to examine whether a convict’s skills were deployed and appropriately rewarded in the colony.

Both male and female convict workers are included, offering insights into gendered labour markets. "Contracts" also tell us about employers, the scale of their workforces, location of their business and arguably their quality as bosses, reflected in whether convicts chose to remain or leave when their contract expired (or sometimes, before). This also reflects on convict agency and resistance. The inclusion of employer and witness signatures in CON 152 offers some opportunity for network analysis.

The greatest limitation of the "Convict Labour Contracts" is fragmentary coverage. As noted, only two volumes remain, just one of each of the two types of Register. The contracts that survive appear to be both numerous and representative. Based on the number of convicts arriving and proceeding through the system, it has been estimated that about one half of the contracts signed in the period 1847 to 1857 have survived in CON 30 "Register of Employment of Probation Passholders". This is internally consistent: the volume only recorded employers with surnames commencing with letters of the alphabet A-L, implying a missing second volume M-Z. This does not necessarily impose any other bias. The places where employers lived cover the entire settled area of VDL, and the line drawn by the number of contracts in each year follows the pattern drawn by the number of passholders in or available for employment annually. For these reasons, CON 30 may be regarded as a representative sample.

Subsequently, following a transfer of papers from Hobart Gaol after a fire, a second volume was discovered, CON 152 "Register of Convicts Hired by Private Employers". This is one of the alternative series of records, arranged by contract and convict. It is male-only. In the overlapping years, CON 30 contained 70 per cent of the number of male contracts registered in CON 152. This may imply that CON 30 contains a greater proportion of contracts than hitherto thought. However, it is not yet known if CON 152 was comprehensive.

Be aware that these two Registers overlap and that some contracts are therefore duplicated. Also note that an individual convict may have signed multiple contracts during their passholder phase, and that contracts could be cancelled and new ones written for the same year. Uncharacteristically for Tasmanian records, convict numbers are not included in the Registers. Also, some pages were missing in the original.

A final point of note is the complexity of identifying convict ships. Uncertainty arises from:

Many researchers have been involved in collecting and entering these data: Deborah Oxley, David Meredith, Patricia Curthoys, Karen Hutchings.

The project was based at the University of New South Wales. Funding was provided by the Australian Research Council: