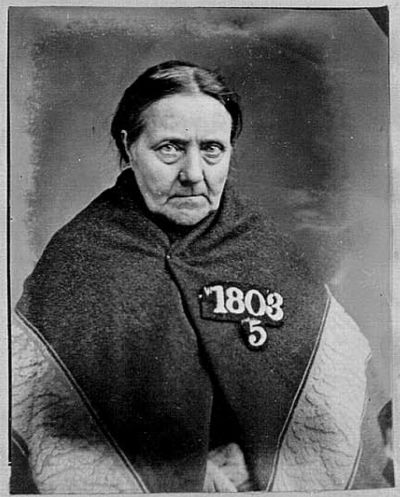 Grand Larceny by Accident or Design

Sarah Durrant was was born in London in 1808 and was later convicted of receiving stolen goods when she was found in possession of two £1000 bank notes. She is unusual in being in her mid-sixties when convicted. Her experience of imprisonment was increasingly commonplace by the 1870s.

Sarah was born in London in 1808; and although it is impossible to be entirely certain, she was probably the daughter of John and Joanna Watkins, who lived at 43 Long Acre in St Martin in the Fields. Sarah married Richard Durrant in the same parish in 1836 - though by the time of her trial was described as a 'widow'. In 1851 she was probably living in the Uxbridge Road, and working as a cook and servant to John and Elizabeth Smith. Sarah stood just under five foot tall (4' 11 1/2"), had a dark complexion, brown hair and black eyes. She had two moles on her face, one on her nose, and another on her chin.

Sarah appears at the Old Bailey only once - on 9 January 1871 - charged with pickpocketing and recieving. She claimed to have found two bank notes on the floor of the coffee house she ran in the London Road in 1871, at which point she pocketed them. In fact they had been stolen from the briefcase of Sydney Tomlin, at the Birkbeck Bank, Chancery Lane a few days earlier. She was arrested by Detectove Police Inspector John Shore in Borough High Street, and when confronted with the crime, pleaded to be allowed to return the notes - crying that she would 'get ten years' and 'shall never see my dear home in this road any more!' Despite her pleas she was taken to the station, where she was examined by a 'female searcher'. The keys to her home were taken and used to search her premises. At her trial she claimed to have been both encouraged to keep the banknotes, and was later turned in to the police by, Ellen Seyffert (known locally as 'Fair Nell'). Durrant described Seyffert as a 'drunken villain, who sold me because I would not supply her with money to get drink'. At least three police officers, including a Police Inspector, Detective Officer and Detective Police Inspector all gave evidence at her trial. Durrant had a defence attorney who pointed to the near year's passage of time between the theft and Durrant's arrest, but the judge nevertheless insisted on allowing the trial to proceed to a jury verdict.

Durrant was found guilty of receiving, but not of pickpocketing the notes, and sentenced to two years’ hard labour; a sentence she served at Wandsworth Prison – just a few hundred yards from her home in London Road. She remained in prison until 28 December 1872, and disappears from the historical record.

An elderly ex-servant and widow, managing a small coffee shop on a busy London road, seems an unlikely candidate for a criminal mastermind. Even Charles Booth rated the London Road a ‘middle class’ thoroughfare. But it is also clear that Durrant’s financial circumstances and respectability were fragile. Searching her home, the police found just a few pounds, and a bundle of foreign correspondence addressed to her under the assumed name of Bramer. Her relationship with Ellen Seyffert – with whom she appears to have cohabited, and co-ran the coffeeshop – was also fragile. Seyffert’s name had previously been above the door of the coffee house, but had been scratched out by the time of the trial. 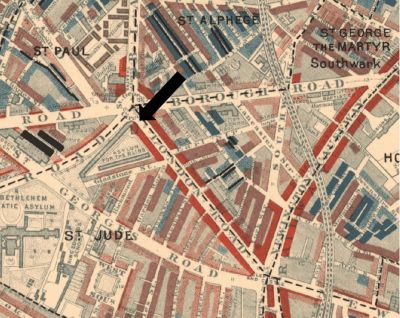 We do not know what became of Sarah Durrant after her release from Wandsworth, but her experience speaks loudly to the challenges faced by even nominally respectable women in late nineteenth-century London.

Sarah Durrant was an unusual criminal and an unusual convict. By the 1870s only approximately 15% of defendants at the Old Bailey were women; and of these over half were between 18 and 30 years old. Sarah was one of only 3 women over 60 tried at the Old Bailey in 1871. By the 1870s the crime for which Sarah was convicted was also unusual among trials at the Central Criminal Court. In most instances ‘pickpocketing’ and ‘receiving’ was counted as minor offences and dealt with in the Magistrates Courts. What set Sarah’s crime apart was the large value of the notes involved. The difficulty of cashing a note for £1000 probably also explains why they had not been cashed a year after the theft.

This page was written by Tim Hitchcock with additional contributions by other members of the Digital Panopticon project team.