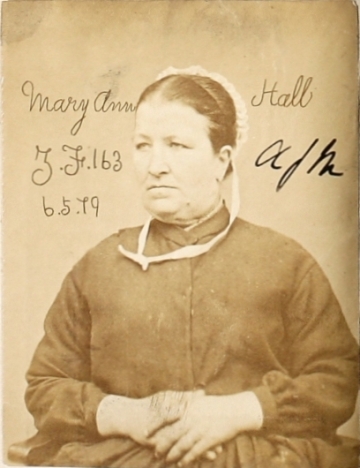 Mary Ann’s poor health shaped the final years of her life, both behind and beyond bars. Her poor physiological condition led to a petition to the secretary of state for early release to Hull General Infirmary and a reunion with her mother in her last days.

The documentary evidence suggests that Mary Ann was born in Kingston upon Hull to William and Eleanor White in 1840. A middle child of at least six children, the family seems unremarkable. In 1883, local police attested to the secretary of state that Eleanor was ‘respectable’ so presumably Mary Ann’s criminal behaviour was unrelated to family and a cause of shame to her working-class parents. All of her crimes are recorded in London under her married name or 'Jane Smith'. Her family name is not mentioned and therefore not listed in the records as an alias.

The pattern of Mary Ann’s offending is intriguing. She was in her late twenties when she first came before the courts in 1870 for “robbery with violence” – stealing a purse from Catherine Buck, containing 4s. 2d. It was a violent mugging, involving two accomplices. Mary Ann took a purse from the victim, while a man – not Mary Ann’s husband – and a woman held and beat Catherine Buck. In the trial they showed no remorse. Each was sentenced to 12 months.

Within a year of being released, in 1872, she was tried for a ‘felony’ again and sentenced to one year with three years police supervision. Mary Ann then appeared in Middlesex Sessions for ‘assault’ in April 1873 (receiving a two month custodial sentence) before being tried later that year for again ‘stealing from person’. This time she was sentenced to seven years custody and seven years police supervision. In 1877 she was released on license (parole). Mary Ann broke the terms of her early release, though, because she reappeared in 1879, on trial for ‘Larceny from person and receiving’. She had stolen a pocket watch and money from William Marsh, worth £2.8.0. She was sentenced to seven years imprisonment and seven years under police supervision. This seems to have been her final conviction.

Her imprisonment did nothing to prevent Hall re-offending. Between 1870 and 1879 she was arrested at least five times. Her crimes were almost all violent offences against the person. By the time of her final sentence, Mary Ann’s health had deteriorated.

Shortly after beginning her sentence in Millbank, Mary Ann was removed to Woking - a prison dedicated to care of the disabled, sick and infirm - on grounds of morbidity. She worked as a ‘knitter’ throughout most of her prison experiences because of her chronic physical conditions. Despite the assistant matron accusing her of malingering in 1882, Mary Ann was clearly in poor health. The medical officer also dismissed her health concerns on more than one occasion until (in 1883) an abscess on her leg turned necrotic - a hazardous level of infection and permanent tissue damage.

The doctor made a u-turn, stating that Mary Ann was “very ill”: “In the course of time, if her general health will permit it, a surgical operation may become necessary to save her limb and perhaps her life. Under any circumstances she will be bedridden for a long time to come. It is possible that her health will be benefited by her removal to another locality.” This underpinned her successful petition to the secretary of state for early release to an infirmary on the grounds of severe morbidity.

At various times, Mary had been described as a "hawker", "charwoman", "needleworker" or "knitter". Her Prison License indicates that Mary Ann was "married with two children" in 1870. Perhaps the children died or were removed from her as wards of the state. There is no mention of children in her latter records.

It is tempting to surmise that life events related to Mary Ann’s marriage to Thomas Hall led her to turn to crime, but nothing is known of their relationship or Thomas’ occupational status. Mary Ann's aliases do not include her maiden name, but without further research to flesh out their lives, we can only guess that this may be further indication of their marriage leading subsequently to Mary Ann's criminal activity. Her accomplices and repeat offences imply that she was not acting alone or without possible enabling influence. Her license shows that she corresponded with her husband in the early 1870s, but that this ceased. In 1877, she was listed as a widow and released early to the East End Refuge – a resettlement home for convict women.

The License for Mary reveals a great deal about her physiological appearance – she was blue-eyed with a "stout" or "fat" build. She had scars on her face, upper lip, back of right hand and her left ear was slit. She also had scrofula or syphilitic welts on her neck and chin. Her medical record shows that from 1880 to 1883 she was in the infirmary for a total of 23 months – suffering from ulcers, lymphadenoma (possibly related to scrofula), rheumatism and necrosis. Mary Ann was clearly unhealthy and probably chronically ill for most of her adult life. Penal servitude could have exacerbated her morbid conditions, but incarceration may also have provided access to medical care she could not afford to pay for outside prison.

In 1883, when Mary Ann wrote to her mother, seeking support for early release, they seem to have become estranged. The first letter was returned. After writing to a family neighbour, Mary Ann’s mother began corresponding. Already in her 70s, Eleanor would live longer than her daughter – the result, perhaps, of a healthier (and more law abiding) lifestyle. There is no mention of Mary Ann or her mother in the 1891 census. It is probable that both women had died before then. Given the dates, it is possible that the Mary Ann Hall who died in Hull in 1888 was this convict, perhaps after release or during her treatment in Hull General Infirmary.

Mary Ann became visible to us because the Victorians systematically compiled physical details of the convicts from the mid-nineteenth century en masse. The detail of extant documents, such as Prison License files, can enable historians to piece together the physiological experience of English convicts at this time. Calculating convict BMIs from weights and heights, and relating this to disease, health or sickness can enrich historians' knowledge of prison life in the Victorian period. It can also help to identify such exemplary cases of convict morbidity and mortality that would otherwise remain concealed.

Approximately 10 per cent of female convicts in the Prison Licenses can be categorised obese or overweight. In an era before bacteriology and effective antibiotics, being considerably overweight could lead to fatal implications for health. The extent to which Mary Ann's health problems were hastened or caused by her penal experiences is difficult to measure conclusively without further life history. Nevertheless, she was clearly part of a hidden number of convicts with morbid conditions for whom we know little about, but there was a disproportionate high financial cost for institutional maintenance and treatment.

This page was written by Kim Price with additional contributions by other members of the Digital Panopticon project team.