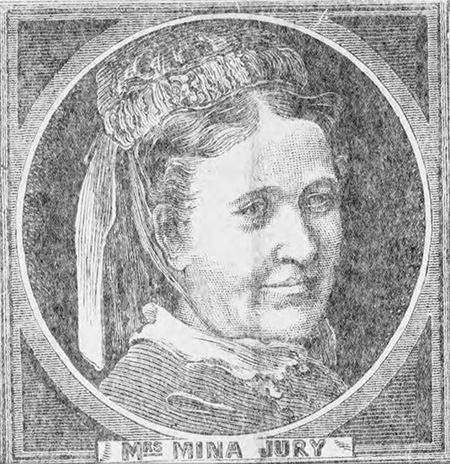 To Australia and Back Again

Mina jury (born Euphemia McCauldfield) was a habitual thief whose criminal career spanned more than four decades. Mina experienced both transportation to Australia and penal servitude in England during her lifetime. Though Mina’s criminal career began in her teens and lasted into at least her late middle age, there was a significant period of stability between the offence which sent her to Australia, and her later offences in England in which she married, had children, and led a law abiding life, before appearing at the Old Bailey.

Mina was born Derry Northern Ireland 1828. She was from a large Irish Protestant family, and had ten siblings. As a teenager she moved to Dublin. At seventeen she had secured work as a domestic servant for a merchant's wife, Mrs. Taylor. In 1847, as the Irish Famine raged, Mina was dismissed from her position for stealing Mrs. Taylor's jewellery. Mina was quickly found guilty at trial and sentenced to be transported for seven years. She sailed upon the convict ship John Calvin and arrived in Van Diemen’s Land in 1848. Mina Made her way through the convict system with little trouble, serving only a short period as a third-class convict before being issued a ticket of leave in 1851. It is through her Founder’s and Survivors record that we know most about Mina’s personal details. She was around 5 foot 5 inches tall, with light hazel eyes, black hair and a ‘rather wide’ mouth. she had been considered by the contemporary press back in Dublin as a 'pretty young women'. Mina claimed to have experience as a dressmaker, though no records of such employment exist. In 1849 Mina married a free man, Francis Jury, who worked as a coxswain in the colony. The pair went on to have a total of eleven surviving children over the course of their marriage. By 1851, as a law-abiding wife and mother of two, Mina’s rehabilitation seemed complete. She had transitioned through the convict system and found stability on the other side. There were no further offences recorded again st Mina in Australia.

In the early 1860s Mina’s husband became the licensed proprietor of a local guesthouse in Hobart town and the family made money from taking in guests and arranging fishing trips. Life was comfortable for the Jurys, they were even able to advertise for their own servants. In 1865 the family relocated to Adelaide in South Australia, so that Francis could take up a job at the local government prison. Disaster struck when Francis was killed in a rifle accident in 1867, leaving forty-year-old Mina alone and responsible for the care of ten children between the ages of two and sixteen.

Within a couple of months, Mina was renting out rooms in the family home to lodgers, and a charitable benefit was organised to raise funds for the widow and her children. Mina was the beneficiary of funds from both the concert, and a $100 payment from the house of assembly in Adelaide – Enough to keep her from the words of poverty.

As Mina faced life as a widow in Adelaide, one of the greatest celebrity cases of the nineteenth century was unfolding back in England. The trial of the Tichborne Claimant, Arthur Orton who had posed as the long-lost heir to a lucrative baronetcy in Hampshire, for perjury at the Old Bailey in 1873, was about to change Mina’s life irrevocably. Mina, having known Orton through a loose family connection in Hobart, was brought to England as star witness for the prosecution. While her testimony helped to send Orton to prison for fourteen years, the trial would also be the catalyst for her own return to court.

When she was transported in 1847, Mina had no previous offences. The robbery for which she was transported remained her single criminal conviction for almost twenty years, until she arrived in England in the 1870s. After testifying against Arthur Orton, Mina began cohabiting with a Mr. Hopwood, another Australian witness from the trial. The romance was short lived, but when the pair parted, they robbed the lodgings in which they had been staying. Mina departed for the north and was convicted of theft in Cheshire in 1874, and again in 1875. She had posed as ‘Madame Caradenza’ a gentlewoman on a painting tour before proceeding to steal furniture and other items from a lodging house. Mina served six months for her 1875 offence, and even escaped from Macclesfield gaol before arriving back at the Old Bailey in 1876. Back in London Mina was charged with theft from a dwelling house, and simple larceny. Mina had a particular technique of theft, that usually involved an elaborate deception, and the use of an alias and backstory relating to a false identity. She received seven years of penal servitude which she served at a convict prison. Each time Mina came out of prison, regardless of the length of her sentence, she would reoffend either immediately, or within a few years.

Mina was released from Fulham prison four years into in to the seven-year sentence from her 1876 offence. She spent ten months at the Russell House refuge, where she received training in domestic service, and employment was arranged for her. She was released from the refuge and sent to a position in Essex with two years left of her sentence, and a term of three years of police supervision.

Two years later, in December 1883, as her former sentence expired, Mina appeared again at the Old Bailey, this time charged with defrauding the Earl of Kilmorey, and the Duke of Edinburgh. Mina had written to both men, under the name Ada Lempriere with a fantastical (and completely false) tale of hardship. Together, the men sent her funds worth £20. For this fraud, Mina was sentenced to twelve months of hard labour. Mina was released in 1884, and made her way to Stafford. In April 1885, Mina was put on trial for larceny. In the years since she had arrived in Stoke-on-Trent, she had not only perpetrated more thefts from lodging houses, she had also attempted to defraud the mayor and the Freemasons. Mina was convicted again, and sentenced to another seven years of penal servitude. She was released half way through her sentence, in 1889 at the age of around 59 (though due to an incorrect birth date, probably given by Mina, She was recorded as 53).

Mina had already experienced penal transportation – one of the most serious penal outcomes available through the criminal justice system – by the time she arrived in England. The outcome of her transportation was more than twenty years in which Mina has no record of offending or conviction. In many ways, until 1874, Mina’s story meets many of the criteria modern sociologists and criminologists set for desistance. Her transportation was, broadly speaking, a success. With no evidence to suggest why Mina embarked on a secondary criminal career, it may be most useful to evaluate Mina’s time in England as a separate period of offending, unrelated to her singular offence in the 1840s. In the more than fifteen years in which she lived and offended in England, Mina would experience imprisonment at both the higher and lower level.

Mina’s early offences in Knutsford in 1874 and 1875 saw her spend six and three months respectively at a local prison in Cheshire.

The record of Mina’s previous offences worked against her in 1876 when she appeared at the Old Bailey. Although the English authorities seemed unaware of her distant criminal record in Australia (perhaps because she gave her place of birth in all official documents as Australia rather than Ireland). Nevertheless, when Mina appeared in court in 1876, her two previous offences meant she was categorised as a habitual offender. For the theft of medical instruments in London, Mina was given seven years of penal servitude.

Mina would have served her time in Millbank (the reception prison), Fulham, and Brixton. Here she would have experienced a regimented daily existence of labour, exercise, and prayer. Her first months would also have been spent in the separate and silent system. Like many convicts who underwent several periods of penal servitude later in the nineteenth century, Mina’s licence documents (last known to have been updated in 1890) have not survived.

In 1883, Mina was lucky to escape another term of penal servitude, gaining only twelve months for her fraud against the Duke of Edinburgh. It is very possible that Mina took care not to breach her licence conditions after her release in 1881, knowing that to do so would me an immediate return to prison to complete the remaining two years of her sentence, as well as a significant term of imprisonment. Mina did however return for another seven years of penal servitude in 1885. After the abolition of transportation for women in 1853 penal servitude at home in convict prisons was, barring rare executions, the pinnacle of the justice system. Penal servitude was intended to be both punitive and reformative for prisoners, though for Mina it does not seem to have worked. Each time she left prison Mina either immediately reoffended, or waited for the period for her licence to expire before again offending. The timings of Mina’s offences suggest that not only did she have a good understanding of the justice system, but that she was willing to navigate it to her advantage.

By the time she arrived in England Mina was already a widow in her forties with a number of adult children. Thus, many of the life events which might otherwise disrupt a period of repeat offending and encourage desistance, had already happened to her. In England, Mina’s lack of social and familial support networks may have actively hampered her continued rehabilitation on leaving prison.

On her discharge from prison in 1889, Mina was sent initially to the Discharged Prisoners Aid Society in Winchester. From there, Mina found her way back to Stoke. The following year, in 1890, several entries for Mina, listing three of her previous aliases, appeared in the Irish Police Gazette. Mina was wanted for ‘stealing money and bedclothes’ at Stoke. Wanted advertisements for Mina continued to appear until the end of 1890. There is no apparent record to suggest that Mina was ever apprehended and tried for this offence. There is no record of death for Mina Jury in the decade following 1890 and so it is possible that Mina either desisted from crime and lived under an assumed alias in England, that she returned to Ireland where few digitized criminal records exist, or that she returned to her stable life in Australia.

Mina Jury’s journey through the criminal justice system is unusual for several reasons. Convicts who returned after their sentenced of transportation expired were rarer than those who settled in Australia. Rarer still were women who made the journey back to the United Kingdom only to reoffend. Mina was unusual, as a woman who experienced both transportation to Australia and penal servitude in England. With one system replacing the other, only a handful of women would have done so. The pattern of Mina’s offending is also unusual, especially in the decades that spanned between her first and second offences. Mina experienced the marriage, family life, and economic stability which helped many offenders rebuild their lives, and desisted from crime. Her second criminal career seems completely at odds with the other factors in her life. Thus it is hard to know how to categorise Mina as an offender. As a teenage thief, she was an early onset offender, for whom transportation appeared to work, but as a middle-aged recidivist (her far more serious criminal career) she was a relatively late onset offender for whom penal servitude was ineffective. She was someone who desisted after a single offence, and persisted despite multiple punishments. In almost every way, Mina was an exceptional convict, with an exceptional life.

This page was written by Lucy Williams with additional contributions by other members of the Digital Panopticon project team.