Lydia Lloyd was a habitual recidivist who faced prosecution in Hampshire, Oxfordshire, and London. Lydia committed a range of public order and property offences between the ages of sixteen and fifty. She died in 1893, just a year after her last recorded conviction. Link to the Digital Panopticon life archive. 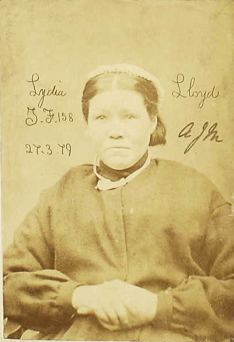 Lydia Loyd was born in Hampshire, England, in 1842. She used multiple names throughout her life, of which Lydia Lloyd was the last and longest standing. Her birthname was Emily Howard, although little evidence is available of her family or very early life. Lydia first came to the attention of the courts in 1858, around the age of sixteen. Lydia appeared in front of a magistrate charged with using obscene language in public. The case was discharged and she was advised to go home to her parents. Lydia did not, or could not, heed this advice, and remained in Hampshire for the next decade, appearing twice more in front of a magistrate for being drunk and disorderly. By 1867, when she was twenty-five, Lydia was working in Portsmouth as a prostitute. She may well have been working in the sex trade for several years prior to this. Prostitutes were particularly vulnerable to prosecutions for public obscenity and drunk and disorderly conduct.

Lydia gained several summary convictions in 1867, for drunk and disorderly conduct, for smashing the panes of glass in a pub window, he theft of a violin, and the theft of a coat, each gaining her between a few days and two months in prison. She was in court for theft the following year, and in 1870 received eighteen months hard labour for the theft of clothing. She spent census night of 1871 in the county prison. Soon after release, Lydia was again caught up in a cycle of offending and incarceration. One of the many women living on the margins of society, trapped in prisons ‘revolving door’. 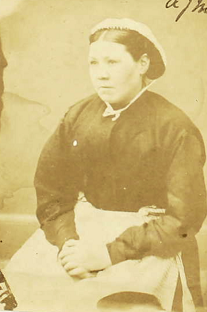 1873 prison photograph Lydia Lloyd (TNA PCOM4/71/5) © The National Archives, London, UK
By 1873 Lydia was living in Oxfordshire, and her long history of previous convictions served to escalate the severity with which her continued offending was treated. In October of that year Lydia was sentenced to her first term of penal servitude. She received seven years for the theft of a sack and a skirt, goods worth a value of just four shillings. Moreover, the judge determined that after her release from prison, Lydia should be subject to five further years of police supervision. This condition would require Lydia to notify the police regularly of her whereabouts and employment and mean that any future offences were more easily detected. Lydia appeared at the Old Bailey in 1879, just two years after her release from her previous sentence, where she was tried for burglary. She had stayed in London after her discharge from Fulham prison in 1877. Although Lydia had only stolen a shawl, an item of relatively low value, the seriousness of the offence was compounded by the fact that she had broken into a private home to do so, and that she had been on licence from a previous conviction at the time. Lydia was caught hiding under the bed in the room where the burglary was committed when a policeman was called. Her only defence was extreme intoxication. She was sentenced to ten years penal servitude and returned to convict prison. She remained incarcerated for the next seven years.

Just as her early experiences of short term imprisonment in Hampshire and Oxford’s local prisons had not been enough to deter Lydia from a cycle of public disorder, her four years of penal servitude for the 1873 offence was also ineffective at curtailing her offending. During her first term of penal servitude, Lydia was fairly well behaved, although she was punished five times in four years for striking other prisoners, damaging prison property, and quarrelling. She primarily filled her time with making various applications to the prison authorities to change her religion from Protestant to Roman Catholic. However, during her second term of penal servitude, Lydia clashed more frequently with the prison authorities. She was punished for repeated rudeness to staff, refusing to work, damaging a range of prison property, physical fights and quarrels with other inmates. Each infraction saw her lose gratuity marks, subject to solitary confinement or a punishment diet of bread and water. Lydia also began to suffer from ill health during her second term of imprisonment, she was treated for both ‘debility’ and ‘abscesses’ in her first four years. However, notes left by the prison doctor also suggest that Lydia feigned some illnesses in an attempt to secure discharge or a break from her work assignment, noting in November 1879 ‘a very poor attempt to feign insanity. A woman of very bad temper and conduct.’ Ultimately, imprisonment did little to improve Lydia’s conduct or dissuade her from offending. Although she was discharged on her second licence in December 1886 and did not return to convict prison, within five years newspaper reports suggest she had returned to Hampshire and the courts. In January of 1892, aged sixty she was sentenced to three months hard labour for stealing bacon.

Lydia’s life outside of prison seems to have been one of isolation and instability. No records indicate that Lydia was ever married or in a long-term relationship, nor make mention of any family members or friends. Lydia was never visited during her time in convict prison, and wrote very few letters. The medical sheet for her 1879 incarcerations notes her to have three children, all living, but no other documentation gives any indication that Lydia received any contact from them. Lydia’s mode of life would have been described by her contemporaries as ‘irregular’ due to the fact that she often had no fixed address and moved from place to place every few years. Records also indicate that Lydia had a fairly significant and long-term problem with alcohol abuse, which doubtlessly contributed to both her regular offending, her ill-health, and personal problems. Regular incacerations, and periods of police supervision, made it difficult for Lydia to hold down regular employment. Like many female offenders, the recorded occupations we have for her show the work she undertook to be of the least secure and lowest paid kind – employments such as charwoman, hawker, and laundress.

Lydia’s offending did de-escalate after she was released from convict prison after her second term of penal servitude. She never returned to the Old Bailey, or to convict prison to serve a term of penal servitude. Lydia may have ceased offending almost completely, or, at the age of 50, become less of a target for the police as her energy for mischief making declined. Death records indicate that Lydia may well have died in 1893 after decades of repeat offending, incarceration, and alcohol abuse.

Lydia Lloyd is a fairly typical example of how early brushes with the law and public order infractions could drag women into a cycle of convictions and imprisonment that was difficult to escape. Although convictions for drunkenness and prostitution did not themselves carry heavy terms of imprisonment, they could significantly damage the reputation of a woman that employment, a regular income, and stable accommodation could be hard to come by. All factors which could too easily drive women towards property crime for which the penalties could be far more severe.

This page was written by Lucy Williams with additional contributions by other members of the Digital Panopticon project team.