"A Thief all his Life"

Edward Wright was a recidivist thief who continued to re-offend well into old age, making his final identifiable appearance before the Old Bailey in 1808 at the age of 82, seemingly unable or unwilling to break free of the cycle of crime and imprisonment.

The Home Office Criminal Registers reveal that Wright was born in the parish of St. James, Westminster, in or around the year 1726 (his birth year varies somewhat from record to record). Nothing else is known about his early life, but he appears to have remained within the area, as many of Wright’s later crimes in the 1780s and 1790s were committed in and about Westminster.

On 26 October 1791, at the age of about 62, Edward Wright was prosecuted at the Old Bailey on a charge of stealing two iron buckles from the shop of John Davis. The jury found him guilty and, the crime being relatively minor, he was sentenced to be publicly whipped and then discharged. This was unlikely to have been Wright’s first time as a defendant at the Old Bailey: seven other defendants by the name of “Edward Wright” had previously been tried at the Old Bailey between 1755 and 26 October 1791, and many of these offences shared all the hallmarks of Wright’s later string of crimes and trials. However, with no accompanying age or other personal information, it’s impossible to know if these earlier trials were of the same Edward Wright.

Clear patterns can be seen in Wright’s crimes, trials and punishments. His modus operandi was to enter a shop, distract the assistant by asking for something to be fetched out or checked, and in the meantime placing his bag over an item in order to secretly carry it out of the shop when the assistant returned. How often Wright was able to do this without being caught is impossible to say, but evidently it wasn’t always successful, because in at least ten instances he was detected and charged. In a couple of cases Wright was only caught because he tried to pull off the same theft in two different shops immediately one after the other.

Wright appears to have had two pre-determined lines of defence ready to make when put on trial. In some instances he claimed that he hadn’t intended to steal the item, but had simply picked it up by accident with his bag and walked away with it unknowingly. He tended to explain this mistake on account of being drunk or insensible: at his trial for stealing four pairs of stockings from a shop, Wright said in his defence, “Being in liquor, I laid the bag down on the counter, and by mistake took up the parcel; I have had several blows on my head, which, if I drink a little, makes me insensible of what I do.” In other instances, meanwhile, typically from the later 1790s onwards, Wright admitted to criminal intent but attempted to excuse his actions on the grounds of poverty. “I am a poor distressed fellow, I have no friends”, Wright pleaded at his Old Bailey trial in May 1798, adding “I am obliged to pay a shilling a night for my lodging, and where am I to get it[?].”

These defences were not enough to persuade the juries at Wright’s various trials to acquit him. But his old age and his poverty does seem to have induced the courts to punish Wright with relative leniency. These factors certainly seem to have established a clear pattern in how Wright was convicted and sentenced, with a tendency for elderly, non-serious offenders like him to be whipped or imprisoned, rather than executed or transported. The “pious perjury” and mercy of the jury saved Wright from a capital sentence in several instances, by finding him guilty on lesser charges, such as stealing from the shop, but not privately.

In most cases, he was sentenced to a period of imprisonment in Newgate or the house of correction (ranging from fourteen days in one instance to three years on another), along with a fine or a public whipping. On many occasions he had only been out of prison for a matter of weeks or even days before he was back on trial at the Old Bailey, only to be convicted and back in jail again. Wright had been fortunate enough to escape execution in 1802, with a recommendation from the jury and prosecutor that he be granted mercy from the hanging cabinet on account of his old age. He was duly pardoned from the death penalty on the condition of two years’ imprisonment in Newgate.

The records available on this website provide a limited amount of personal information about Edward Wright. In addition to being born in the West End of London in the 1720s, it appears that Wright was a sawyer by trade, claiming in one instance that he dealt in particular at Rag Fair. His complexion was recorded as “fair”, with blue or grey eyes, and (by the 1790s) grey hair. In some of the later records we are told that he had the nickname “My Hearty”, and he was perhaps deemed a suspicious character. In Wright’s Old Bailey trial of 1797, one witness stated that he immediately had “some suspicion” of Wright. Whilst we should take Wright’s trial defences with some scepticism, there is some reason to believe that he was in a genuine state of poverty, having declared in one trial that the Lord Mayor’s office had granted an order for his parish to clothe him.

Despite narrowly escaping the noose in 1802, and having served out the two years in Newgate as a condition of his pardon, Wright was however soon back on trial at the Old Bailey, on 3 December 1806, now at the ripe old age of 80. The charge of shoplifting was reduced to simple grand larceny, leading to a further year’s imprisonment in Newgate and a 1 shilling fine. “He has been tried above 70 times”, the keeper of the Criminal Register now recorded. Yet this was not to be the last, for on 14 September 1808 Wright was to make a further and final identifiable appearance at the Old Bailey, now at the age of 82, again on a charge of stealing from a shop. All Wright’s previously artful defence statements were here left behind. When called upon to speak, he simply said: “I leave it all to your mercy.” As they had done on so many occasions before, the jury found him guilty and the judge sentenced him to a year’s imprisonment and a 1 shilling fine. “The noted ‘My Hearty’,” the Criminal Register entry for this prosecution reads, “a thief all his life.” 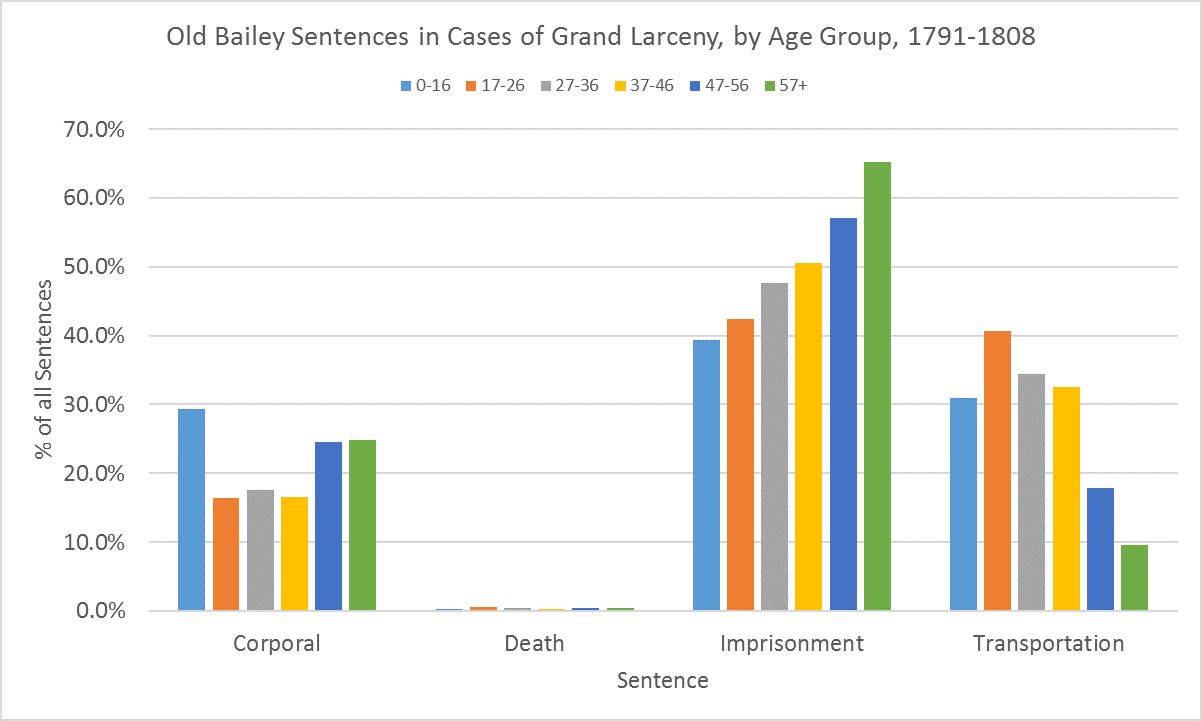