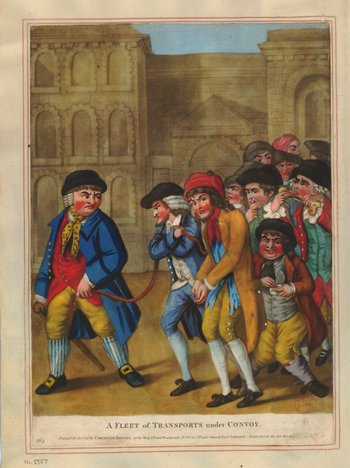 The "Middlesex Convicts Delivered for Transportation 1785-1792" records included on this site contain lists of 1,589 convicts primarily from the Old Bailey and Middlesex sessions of the peace who were delivered to ships and hulks ready for transportation to New South Wales between 1789 and 1792.

Between July 1789 and October 1792, Richard Akerman, the keeper of Newgate gaol, submitted to the justices of the peace (JPs) at the Middlesex sessions of the peace lists of convicts sentenced to transportation whom he had conveyed from Newgate to various vessels along the Thames or south coast ports. Akerman also included detailed accounts of the substantial expenses incurred in the process. After the JPs approved his claims and made orders for payment, the names of the convicts and (in most cases) their destinations were neatly copied into the Sessions Order Books.

After October 1792, the expenses continued to be periodically recorded in the Order Books, but not the convicts' names. The majority of the convicts listed embarked for Australia, and so the lists chronicle the very beginnings of the enforced emigration of offenders from Britain to Australia between 1787 and 1868.

Those who were transported to Australia may be found in the British Transportation Registers 1787-1867 and the earliest Convict Indents (Ship and Arrival Registers) 1788-1868, but there are gaps in the early transportation registers and so this will not always be the case.

The lists document a stage of the convicts' long journey for which there are few surviving records earlier than the nineteenth-century prison hulk registers. They may also fill in some gaps in early transportation registers.

However, the lists contain very limited amounts of information. They are (in most cases) simply lists of names and do not contain any details of trials. Therefore linkage between these records and other related sources is often difficult.