A large number of convict records contain written physical descriptions of convict bodies, including their tattoos. Within the Digital Panopticon there are 74,568 descriptions of tattoos on 58,002 convicts. A British Academy funded project, Analysing Convict Tattoos through Data Mining and Visualisation , extracted this information into two datasets in order to enable the searching and visualising of this rich and evocative collection of data. These datasets, and the methodology used to create them, are described below.

Tattooing has a long history, but records of tattoos prior to the advent of photography are rare. A major exception is in the punishment records of convicts convicted in nineteenth-century Britain. Because Australia was, in effect, an open prison, the records of convicts transported there contain extensive physical descriptions, including their height, eye and hair colour, complexion, and physical marks, including tattoos. Similarly, from the opening of Millbank prison in 1816, records of those imprisoned also contained such information, in part to facilitate identifying convicts who escaped. Later in the century, as concerns over recidivism grew, such records helped identify repeat offenders.

In particular, seven datasets in the Digital Panopticon contain records of tattoos: 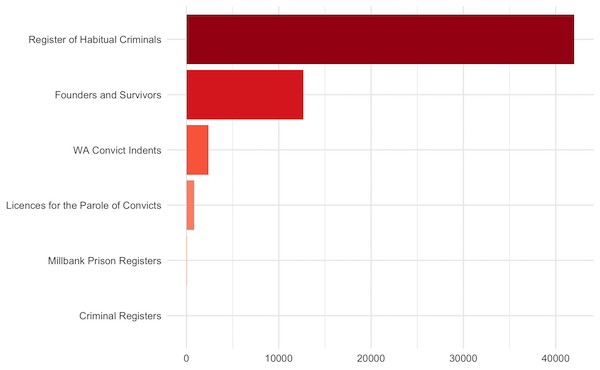 Number of Tattooed Convicts by Dataset. Visualisation by Sharon Howard.

As is evident, the dataset is dominated by entries from the Founders and Survivors records of transported convicts, and the Register of Habitual Criminals.

Information about tattoos in these records is embedded in more general physical descriptions of convicts, so was not previously readily searchable. The British Academy project extracted the relevant information to create the two datasets described on this page: Convict Tattoos, and Specific Tattoo Descriptions. The former organises the information by convict, and the latter by record. Since some convicts had their tattoos described more than once, the second database is larger. By tattoo description, we mean a single phrase which describes one or more tattoos located in a single record. For example, there are two descriptions for John Holland one from 1856 and one from 1867. Only very rarely, as in the case of William Graham from the Millbank Prison Register, do we have a sketch of what the actual tattoo looked like.

In addition to the original written description, each entry in the databases includes extracted information on the tattoo designs, body location, written words, and subjects (as determined by project staff). For example John Holland's 1867 tattoo description, Anchor M.B. ring on second finger mole on left shoulder mole on back bald has been categorised as follows.

(Note that the information about the moles on his shoulder and back and his baldness has been ignored.)

It is possible to search by each of these specific types of information. In addition, you can search by 'keyword', in which transcription errors have been corrected, and variant spellings have been regularised. For example, 'horse shoe' has been regularised as 'horseshoe'.

Extracting and analysing information about tattoos from physical descriptions of convicts is not straightforward, because these descriptions, often entered in the same column on a form, contain a wide range of other information: physical characteristics (eye colour, shape of face, etc), bodily infirmities (lame leg, broken nose), and personal details (such as occupation or religion), in a variety of formats. The challenge in this project was to extract the information about tattoos from all the other information in these descriptions. It was decided not to use machine learning for this work, because it requires ‘training data’, in which the tattoos were already correctly identified, and we didn’t have that. But we used some approaches derived from it, in developing the following approach.

1. We divided the texts into single words and multi-word phrases, and then manually assigned a type to each: design (tattoo), written words (in a tattoo), body part, body specifier (left, right, upper, back of), hanging body specifier (where the body specifier, such as right, is detached from the part of the body it refers to, such as hand), stop word (anything unrelated to a tattoo, such as scar or mole), separator.

2. To determine body location, it was discerned that divisions in tattoo descriptions normally took place after the occurrence of a body part (we couldn’t rely on punctuation, as it was too inconsistently used). Each combination of information ending in a body part was defined as a ‘chunk’, and separately categorised, as you can see in the following example, recording the tattoos on Alfred Hitchcock:

But there was a problem with what we called ‘hanging body specifiers’, as in the tattoos on George Butcher:

H.B.I.H. and bust of jockey right, yacht, G. B. and dot left forearm

Here, right is a ‘hanging body specifier’, because it is detached from the part of the body it refers to, hand. In these cases, we created a new rule: the computer was told to look for the next body part in the description, so we know that H.B.I.H. and bust of jockey were on the right forearm. This and other exceptions to the basic rule about ‘chunks’ were identified as regular expressions and then categorised by pattern matching, allowing for anomalous wordings to be included.

3. The next, and most interpretive part of the process was to assign subjects to the words identified as describing tattoos. The list of subjects is below. The assignment of subjects was done manually, paying attention to the contexts, but this is a subjective process. Any tattoo design can have more than one subject assigned. Sun, Moon and Stars for example, is categorised as both 'astronomy' and 'religion'. 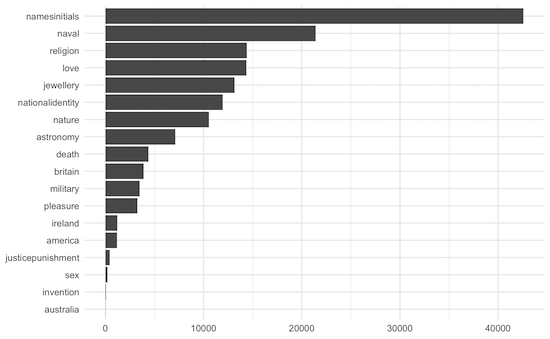 Frequencies of Tattoo Descriptions by Subject. (Tattoos can be categorised by more than one subject). Visualisation by Sharon Howard.

4. Finally, we linked this information to all the other records in each convict’s ‘life archive’, thereby providing evidence of their ages, gender, occupations, offences, and punishments.

As far as we are aware, these databases contain the largest amount of information about tattoos available for the nineteenth century. The information contained about convict tattoos provides otherwise unavailable access to the sentiments of men and women who left few if any other records in their own voice. As our research page on tattoos demonstrates, analysis of patterns of tattooing by gender and occupation of convicts, and by designs, subjects and body locations of their tattoos, are fascinating, and reveal some significant changes over time.

Nonetheless, there are some significant limitations to this data.

First, these are only written descriptions, and often they provide very limited evidence of what the tattoos actually looked like. The clerks who recorded this information used their own words, and sometimes censored obscene language. They may also have failed to record all tattoos. Accounts vary as to whether convicts were stripped to the waist or totally naked while the tattoos were recorded, and it is likely that the relatively small number of tattoos on the lower half of the body is due to the fact such tattoos were often not visible.

Second, the computational methodologies used to extract this information (described above), which rely on pattern matching and dictionaries, are not infallible, and it is likely that some tattoos have been misidentified.

Finally, the historical judgement involved in identifying designs, subjects, and words written on bodies is subjective and fallible; it is likely that other historians would have made somewhat different decisions.

For further information about the practice of tattooing, see convict tattoos.

For further information about the datasets from which the tattoo descriptions were extracted, see the relevant pages on each dataset.

This page was written by Robert Shoemaker, with help from Zoe Alker, Jamie McLaughlin and Sharon Howard.