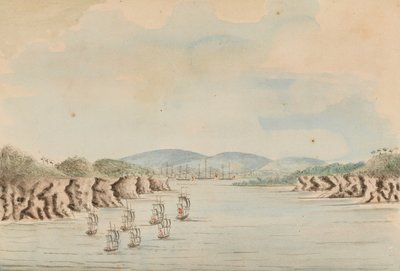 Journals were kept by surgeon superintendents detailing the convict voyage from England to Australia. These records were created after the Royal Navy turned the transport of convicts over to merchant shipping. Each journal represents one voyage of a convict ship.

Initially, surgeon superintendents had limited authority. They were appointed by private contractors to ensure the convicts' health and good ship hygiene, but they could be overruled. Contractors initially were paid per capita and not whether the convict arrived safely at the other end. Consequently, convicts were sometimes transported when they were unfit or suffering from infectious diseases. There were also noted occasions of masters defrauding convicts of part of their rations, as well as convict mistreatment and neglect.

Such practices were documented and led to reforms. Medical officers were given increasing authority to prevent the sick from entering the ship in the first place, contractors' pay later depended on convicts arriving in good health, and the master would only be paid on receipt by the transport authorities of a certificate from the Governor. Additionally, the surgeon was required to keep a journal of the health of the convicts and the sanitary steps implemented. Then, from 1815, surgeons were selected from the Royal Navy and were given ultimate authority over the convicts during the voyage.

Using the dated log entries, convicts can be tracked through the period of their voyage. While the types and detail of the information does differ from one journal to the next, the range of information available can include: name, age, crime which resulted in transportation, sentence length, previous convictions, previous punishments, point of embarkation, native country, education, previous employment, any diseases, illnesses and treatments are included amongst sick lists, births, date of death, cause of death, lists of ship’s stores, daily routine for the convicts and even noteworthy events involving the convicts. 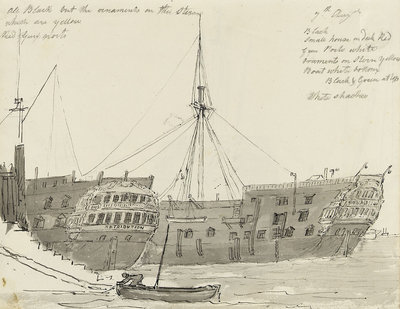 Behavioural information is also often available – including positive behaviour which may result in "special" treatment and bad behaviour which may have resulted in immediate punishment and could also affect their new colonial lives. For example, misbehaviour on the ship may have resulted in being sent to the house of correction instead of being put out on assignment. Other information can sometimes be found such as climate, and the surgeon superintendent’s views on ventilation, convictism, discipline and generally their opinion of their convict charges. These journals also contain a wealth of information about the voyage – weather observations, latitude and longitude.

The main concern for the surgeon superintendents was their convict charges. As such they wrote detailed documentation on the conditions of convicts from the point of embarkation to the point they handed them over to the colonial authorities. This including informing them of: any infirm, diseased and aged convicts; whether the convicts were handed into his care with limited clothing; and any complaints convicts made about their former confinement. For example, onboard the Richmond convict ship, some of the convicts complained they had not been given the correct rations while onboard the hulk. Since the journals are a record of the illnesses suffered by the convicts during the voyage, some surgeons also noted information on mental health – for example, the effects of solitary confinement. They also noted how the convicts interacted with one another.

Information on the skills of convicts such reading, writing, previous employment and trades are also included in many journals.

Those who were transported to Australia may be found in the British Transportation Registers 1787-1867 and the earliest Convict Indents (Ship and Arrival Registers) 1788-1868, but there are gaps in the early transportation registers and so this will not always be the case. Many will also be found in the New South Wales Convict Indexes 1788-1873 and in the VDL Founders and Survivors Convicts 1802-1853 and VDL Founders and Survivors Convict Biographies 1812-1853 records.

Those convicts who were held on the hulks prior to their voyage to Australia may be found in the Hulks Registers 1801-1879. 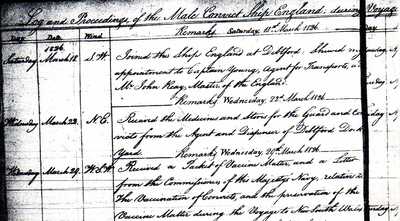 The journals include a variety of important information about these historical journeys, but it's important to note that most of this information is not available through this website (see below for how to obtain access to the full records). It is, however, possible to view the name, year, age (and therefore calculate birth date), death date and the ship name on this website.

The full texts of the journals include information on convict behaviour and the practices of ship life. For example, sailing in October 1821, the Richmond saw two convicts fall from favour in the eyes of the surgeon superintendent who took them under his wing. Thomas Brown, a juvenile convict, had been strongly recommended to the surgeon by the Reverend Mr. Price, chaplain of the Retribution hulk at Sheerness. In consequence of which he was employed in his cabin binding books. The other juvenile convict, Edward Dixon, was set to work as a tailor. Both, but particularly Brown, were "treated with [the] greatest kindness". However, they stole money from the surgeon, their fellow convicts and three of the ships officers, and proceeded to attempt an escape. The surgeon described them as portraying "guilt and depravity and hypocrisy". The surgeon had been alerted to their behaviour by a fellow convict, and in the journal goes into detail outlining his failed attempt to catch the two boys in the act. The boys were confined in irons and eventually confessed.

Since these factors, along with details of behaviour, influenced the convicts’ colonial life in terms of assignment, these journals were very important contemporary documents. Likewise, they are subsequently very interesting historical documents for family historians and researchers.

As well as providing information on individual convicts, these journals allow the researcher to put those convicts in the context of their voyage – from daily routine to noteworthy events.

If a person, or persons, of interest are located it will then be possible to view the original medical journals from convict’s ships which are available at the UK National Archives in Kew, London (under the classification ADM 101). They are also available at the NSW State Records. Many have also been digitized and are available on Ancestry.com by searching for UK Royal Navy Medical Journals, 1817-1857, and then by the name of the ship and its year of passage.

This page was written by Emma Watkins, with additional contributions by other members of the Digital Panopticon project team.